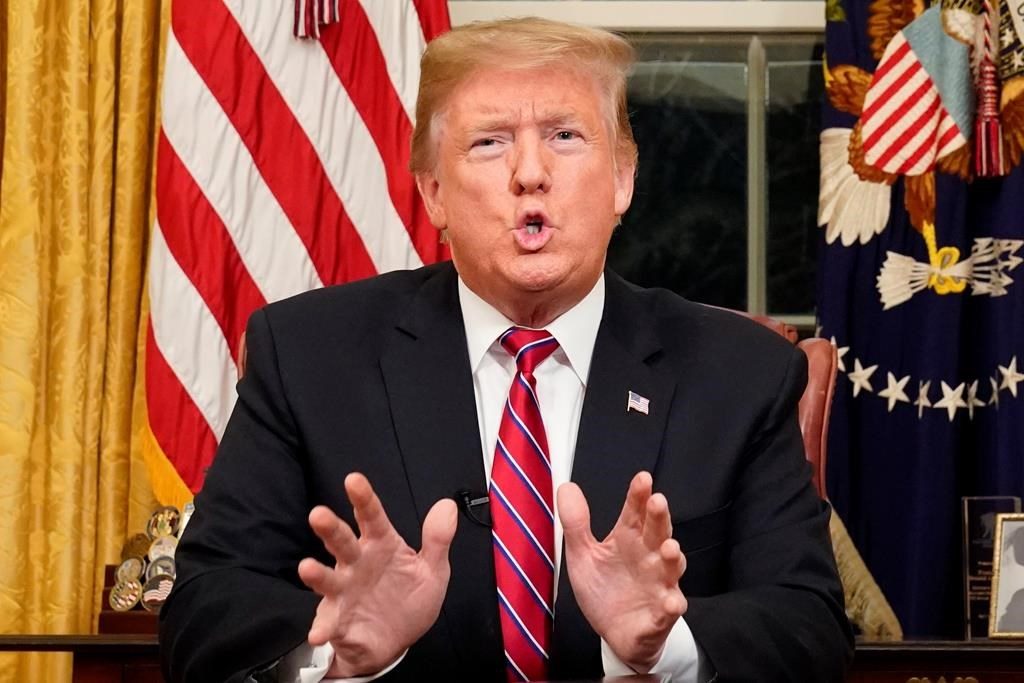 President Donald Trump speaks from the Oval Office of the White House as he gives a prime-time address about border security on Tuesday, Jan. 8, 2018, in Washington. Photo by The Associated Press/Carlos Barria
Previous story
Next story

President Donald Trump took his case for a wall along the southern U.S. border directly to the American people Tuesday, using the first televised Oval Office address of his presidency to justify an 18-day government shutdown that observers say is beginning to manifest itself along the country's northern boundary with Canada.

Moments after Trump's televised address, his political nemeses in Congress, Speaker Nancy Pelosi and Senate minority leader Chuck Schumer, were fast on his heels, debunking his argument as "an appeal to fear, not facts" — with hundreds of thousands of furloughed and unpaid American government workers caught squarely in the crossfire.

Trump called the situation at the U.S.-Mexico border a "humanitarian and security crisis," as well as a "crisis of the heart" and a "crisis of the soul." He rattled off a list of heinous, high-profile crimes committed on U.S. soil, ostensibly by illegal immigrants. He even likened his wall concept to prominent political figures — an apparent reference to former president Barack Obama — securing their homes behind security fencing.

"Some have suggested a barrier is immoral," Trump said.

One thing the president did not do was declare a national emergency, as some observers had expected him to do in an effort to do an end-run around a Democrat-led Congress that has so far steadfastly refused demands for $5.7 billion in funding. However, media reports Tuesday suggest such a declaration could indeed be just days away.

Despite having declared last month that he would take the blame for the shutdown in the name of border security, Trump instead laid it squarely at the feet of his political opponents: "The federal government remains shut down for one reason, and one reason only — because Democrats will not fund border security."

Pelosi and Schumer, who were granted equal airtime in order to rebut Trump's address, were having none of it.

"We don't govern by temper tantrum," Schumer said. "No president should pound the table and demand he gets his way or else the government shuts down, hurting millions of Americans who are treated as leverage.

Trump's long-promised wall — he conceded Tuesday he'd settle for a steel barrier instead of a concrete one — is at the core of an ideological clash that triggered the Dec. 22 shutdown and forced some 380,000 government employees to stay home on unpaid leave. Another 450,000 essential workers, including Customs and Border Protection officials, are working without pay.

The impact in Canada has been minimal, but that could change if it drags on much longer.

The Nexus cross-border preclearance program, which is not considered an essential service by the U.S. government, has already been affected. New applications are not being accepted, many on-site offices are closed and interviews with applicants, which are typically conducted in tandem by Canadian and American officials, are being postponed or cancelled.

And if the shutdown persists, it's likely that unpaid CBP officials will soon start defying their government and staying home — even if they are sympathetic to the president's cause, said Len Saunders, a Canadian immigration lawyer who's based in Blaine, Wash., near the Canada-U.S. crossing.

Saunders, who routinely chats up border officials, said the shutdown began just after they received their last paycheques, helping to soften the blow. But with the shutdown now nearly 18 days old, that financial cushion is likely gone.

"But you have to remember — 99 per cent of the CBP officers, they're Republican. Most of them are very, very conservative and definitely support Trump."

That fact wasn't lost on the president in Tuesday's speech.

"This barrier is absolutely critical to border security," he said. "It's also what our professionals at the border want and need."

In the U.S., the Transportation Security Administration has acknowledged a spike in sick calls from airport security screeners, another group of essential employees who are working without pay. But the impact to date has been minimal and the wait times remain within the agency's standards, the TSA said in a statement earlier this week.

That, too, could soon change. One of the unions that represents screeners told Politico that a number of its shutdown-stricken members have already quit in search of other work, and more are contemplating whether to do so if they don't get paid at the end of the week.

At Canada's busiest airports in Toronto and Vancouver, where U.S. officers perform border-protection duties, wait times remain normal. Toronto's Pearson International Airport did experience delays last week, but it's impossible to say whether it was related to the shutdown, said Maria Ganogiannis, a spokeswoman for the Greater Toronto Airport Authority.

"Our holiday season is Dec. 16 to Jan. 6, and it's possible that the higher passenger volume contributed to longer wait times during this period," Ganogiannis said in an email.

"Wait times for passengers to the U.S. vary daily, based on the staffing that U.S. CBP puts in place and the volume of passengers travelling. Other than providing the infrastructure that our partner agencies use, the GTAA does not have a role in how quickly passengers clear customs and security."

Customs and Border Protection did not respond to media inquiries Tuesday. A number of staff in the agency's media-relations department have been furloughed.

"The longer this takes, the more animosity you're going to see at the border," Saunders said. "Right now, it's not a big issue, but it could be."