Underfunding, bad repairs, cited for why Canadian roads are breaking down 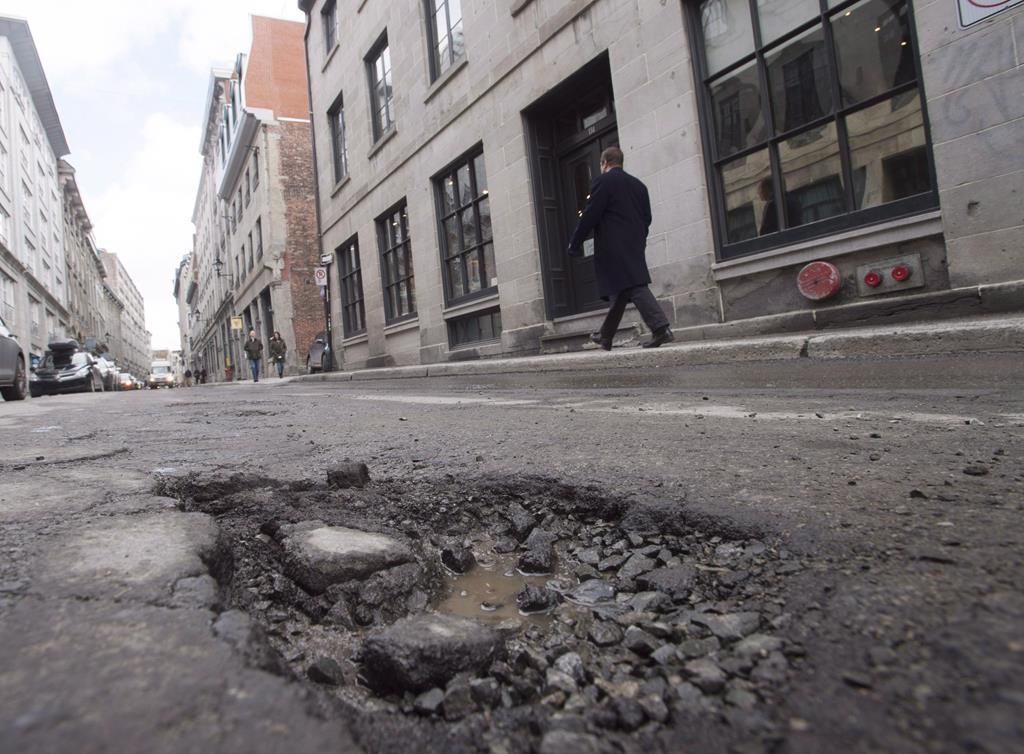 A pothole is seen on St. Paul street on Friday, March 18, 2016 in Montreal. File photo by The Canadian Press/Ryan Remiorz
Previous story

Municipal and provincial governments in Canada are all looking for better ways to deal with their growing pothole problems, but none is properly tracking whether the repairs they do now are effective over time, says the author of a soon-to-be completed study on the roadway menaces.

And few appear prepared to spend the money necessary to ensure what they shovel into the car-crippling craters lasts until longer-term road repairs can be performed, says engineer Dave Hein.

"Everybody says they're trying new things," says Hein, who calls potholes "very personal" for the countless drivers who have to pay for new wheel rims and tires and to fix bent suspensions after encountering them.

"Everybody's looking for the magic bullet, and nobody's got the magic bullet," says Hein, principal engineer at Applied Research Associates, Inc., which was commissioned by the Transportation Association of Canada to uncover better solutions to pothole repairs. The association studies technical issues related to roads, highways and urban transportation.

"Nobody has performance measures," Hein added in an interview with The Canadian Press. "And nobody even tracks to see if what they are doing is performing better than somebody else."

Cities and towns, along with provincial and territorial governments, have been experimenting with different materials and new technologies to tackle potholes.

The cities of Ottawa and Thunder Bay, Ont., Cranbrook, B.C., and Montreal are among those that have experimented with a pothole-filling machine called the Python 5000, which mechanically fills cracks and crevices in roadways — work normally performed by manual labourers — in efforts to speed repairs and ensure they are done uniformly.

Others have tested a variety of hot and cold mixes of asphalt and other materials, hoping they find something better than what has been used in the past.

The City of Toronto, which mainly uses hot mix asphalt, reported filling nearly a quarter million potholes with the material in 2018, an increase over the previous two years but a significant decline from 2014.

Montreal reported filling roughly 122,000 road cavities last year. In Saskatoon crews dealt with 100,000 of them, while Edmonton reported patching 600,000 potholes. Hein said he was unable to verify the numbers.

Cities using the hot mix, which also include Vancouver, Calgary and Regina, performed better than those using other methods, said Hein, while others, such as Yellowknife and Saskatoon, appeared to have had less success using alternative materials.

Ultimately, though, how long a pothole patch lasts depends on how the job is done, said Hein.

Municipalities can do a better job filling potholes by properly training their employees — and giving them a little extra time to do the work, he said.

"Cleaning and preparing and tack coating, where you put a little asphalt cement around the outside, and proper compaction all leads to better performance," Hein explained. "It's the execution of the work."

Regardless, hole repairs will only last anywhere from a few days to a year. No matter what material or labour is used, filling a pothole is only a temporary fix. Really repairing a failing road means resurfacing it all.

Municipalities agree on the need for better training and methods for fixing potholes, said Hein. What they apparently don't agree on is paying for it.

"There's a disconnect in this country between construction of new infrastructure and maintaining existing infrastructure," he noted. "The new stuff gets high priority. The maintenance stuff, that's not sexy."

Some municipalities are also finding themselves bogged down in responding to social-media complaints about potholes, rather than actually making the repairs.

"Social media is blowing things way out of proportion," because municipal politicians over-react to posts about potholes, Hein explained. "So (road crews) are not doing engineering work, they are responding to politicians because of what they saw posted on Facebook."

Hein's final report to the association is due in April.