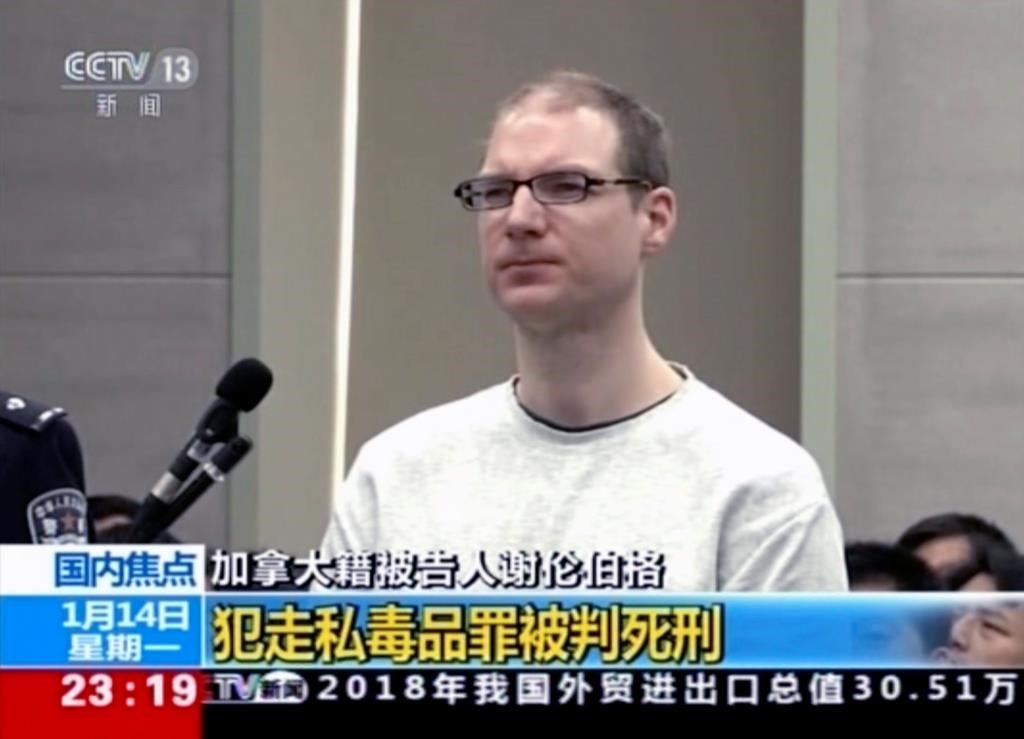 In this image taken from a video footage run by China's CCTV, Canadian Robert Lloyd Schellenberg attends his retrial at the Dalian Intermediate People's Court in Dalian, northeastern China's Liaoning province on Jan. 14, 2019. Photo by CCTV via AP
Previous story
Next story

Canada shot back at China on Tuesday, branding the death sentence imposed on a British Columbia man as inhumane and flaunting the support of its allies in trying to win the release of two other imprisoned Canadians.

The two countries toughened their respective travel advisories, making a mockery of a last year's bilateral feel-good initiative to boost tourism between them.

Foreign Affairs Minister Chrystia Freeland said Canada has asked China to spare the life of Robert Lloyd Schellenberg, who was originally sentenced in 2016 to a 15-year term for drug smuggling. On Monday, after a new trial, he was sentenced to die.

"We believe it is inhumane and inappropriate, and wherever the death penalty is considered with regard to a Canadian we speak out against it," Freeland said in Saint-Hyacinthe, Que.

Freeland also trumpeted a long list of allies that Canada has courted in its efforts to free Michael Kovrig and Michael Spavor, two other Canadians imprisoned last month after Canada arrested a Chinese executive at the request of the United States.

"So much of the world is speaking with one voice on this matter and I think that is certainly a good start. But the people (Kovrig and Spavor) are not yet free, and there is still more work to be done," Canada's ambassador to China, John McCallum, said in an exclusive interview in Montreal.

"I think that's very important, and I think the prime minister and foreign-affairs minister have done a great job in getting all those major countries to come out publicly in support of Canada."

Freeland said she wanted to "emphasize" how glad Canada is that "a large and growing, group of our allies has stood with Canada."

She rhymed off a list of countries — Germany, France, the Netherlands, the European Union, the United States, Britain, Australia, Estonia, Lithuania and Latvia — for "publicly coming out and speaking against these arbitrary detentions. And that is very important."

The international outreach has sparked Chinese ire, including a scathing attack from Beijing's envoy in Ottawa that it smacks of "Western egotism and white supremacy."

Freeland and McCallum spoke after China's foreign ministry blasted Trudeau earlier on Tuesday, expressing "strong dissatisfaction" with his criticism of the death sentence for Schellenberg.

Hua told reporters in Beijing that China expresses "our strong dissatisfaction with this" and is cautioning its citizens about travelling to Canada. It urged Chinese citizens to consider their personal circumstances and "fully assess the risks of going to Canada for tourism."

The notice mirrored Canada's revision of its own travel advisory Monday that warned of the "risk of arbitrary enforcement of local laws" in China.

McCallum, a former cabinet minister who was a vocal booster of Sino-Canadian tourism, said his top priority "is to do everything I can to get the two Michaels" released as quickly as possible.

"I also agree with the prime minister, who referred to the arbitrary death penalty," said McCallum, who is expected to brief Trudeau's cabinet at a retreat this week in Sherbrooke, Que.

Canada has asked China's ambassador to Canada for clemency in Schellenberg's case, said Freeland, adding that she had "a very emotional conversation" with Schellenberg's father on Monday.

"With the case of Mr. Schellenberg, it's important for us to remember that we're talking about a human being, about a person," the minister said. "We really understand how difficult the situation is, and I think the Schellenberg family has our country's sympathy."

Schellenberg had a history of criminal drug offences that dated back to 2003, and pleaded guilty in April 2012 to cocaine trafficking in the Supreme Court of British Columbia, according to a transcript of the hearing.

Judge Neill Brown noted Schellenberg's criminal history and the fact he was battling a drug addiction after breaking his leg. He was on probation from a 2010 drug offence when he committed the new offence.

"His father has turned his back on him because of his criminal history although he still has the support of some family members," Brown said as he handed Schellenberg a two-year sentence.

"You are not caught up in Libya or Syria … and I accept that you have your own struggles to deal with, but you have to confront those," Brown added. "I hope this is the last time you appear in court. You are fortunate that you have some family members supporting you."

Anyone who deals in drugs

Anyone who deals in drugs that ruin other peoples lives needs to be separated from society indefinitely, or until he or she can be rehabilitated.

I don’t regard execution to be inhumane if it is done without suffering. In contrast, solitary confinement for a long time is inhumane. (Please note that I am not advocating for capital punishment, just a change in language).