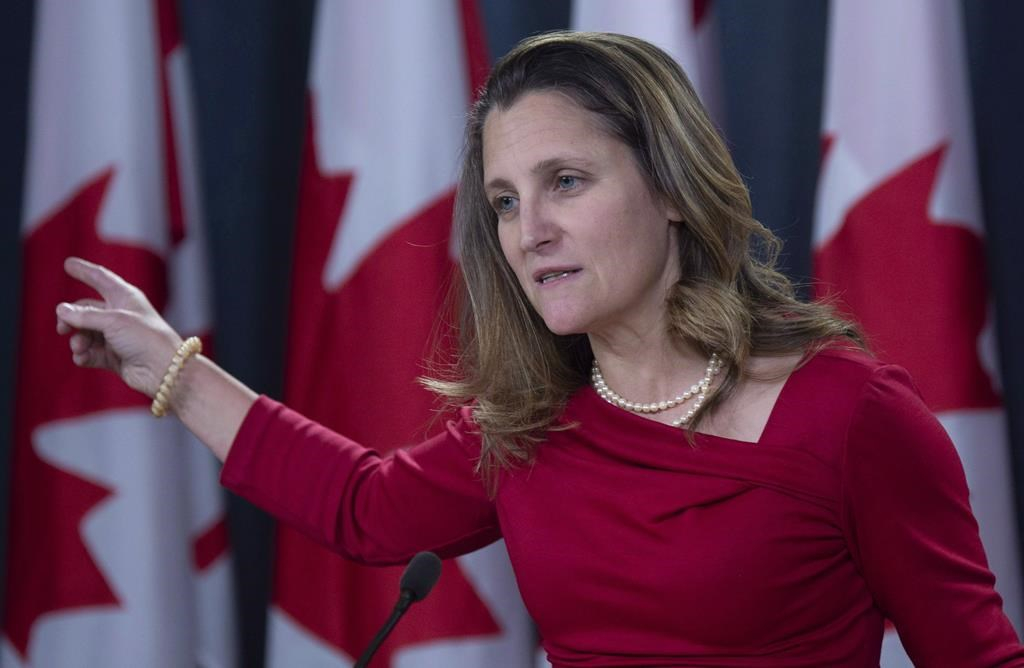 Minister of Foreign Affairs Chrystia Freeland speaks with the media during a news conference in Ottawa, on Wednesday, December 12, 2018. File photo by The Canadian Press/Adrian Wyld
Previous story
Next story

China rebuffed the latest broadside from Canada over its detention of Canadian citizens, rejecting the assertion that China's behaviour poses a threat to all nations.

Instead, foreign ministry spokeswoman Hua Chunying said Thursday that people from China could themselves be at risk following Canada's detention of a Chinese telecom executive for "no reason."

"What threat has China posed to Canada?" Chunying said when asked by journalists about the duelling allegations. "I think your foreign minister may be in a hurry, and can't help speaking without thinking."

The remark was triggered by Foreign Minister Chrystia Freeland's comment Wednesday that "the arbitrary detentions of Canadians ... represent a way of behaving which is a threat to all countries."

China detained two Canadians in what Western analysts see as an attempt to pressure Canada to release Huawei executive Meng Wanzhou, who was arrested in Vancouver at the request of the U.S.

Meng's arrest while she was transiting the city's airport on Dec. 1 created a diplomatic rift that has continued to grow. Meng is the chief financial officer of the Chinese telecom giant and the daughter of its founder. She is wanted by the U.S. in relation to an investigation into Iran sanctions violations.

China then sentenced another Canadian, Robert Lloyd Schellenberg, to death on Monday in a sudden retrial of his drug-smuggling case. He was originally sentenced in 2016 to a 15-year term, but the court delivered the new sentence after reconsidering his case.

The ruling appears to have fuelled a daily sparring match between the two countries.

"It is understandable that Canada is a little worried, but we hope it will avoid speaking freely without thinking because its reputation and image would be badly damaged by such behaviours," Hua said Thursday. "And such remarks cannot help settle the issue, either."

A statement from deputy spokesman Robert Palladino said U.S. Secretary of State Mike Pompeo and Freeland spoke Tuesday and "expressed their concerns about the arbitrary detentions and politically motivated sentencing of Canadian nationals."

Canada has embarked on a campaign with allies to win the release of ex-diplomat Michael Kovrig and entrepreneur Michael Spavor, who were detained 10 days after Meng's arrest. They were arrested on vague allegations of "engaging in activities that endanger the national security" of China.

Freeland has asked for clemency for Schellenberg and has called his sentence "inhumane."

Diplomatic relations between Ottawa and Beijing have quickly deteriorated since Meng's arrest, to the point some fear they could damage Canada's business relationship with its second-largest trading partner.

John McCallum, Canada's ambassador to China, said the government has done a "great job" getting allies to rally in support of Canada's position. But he added: "I really think that's just the beginning."

- With files from AP