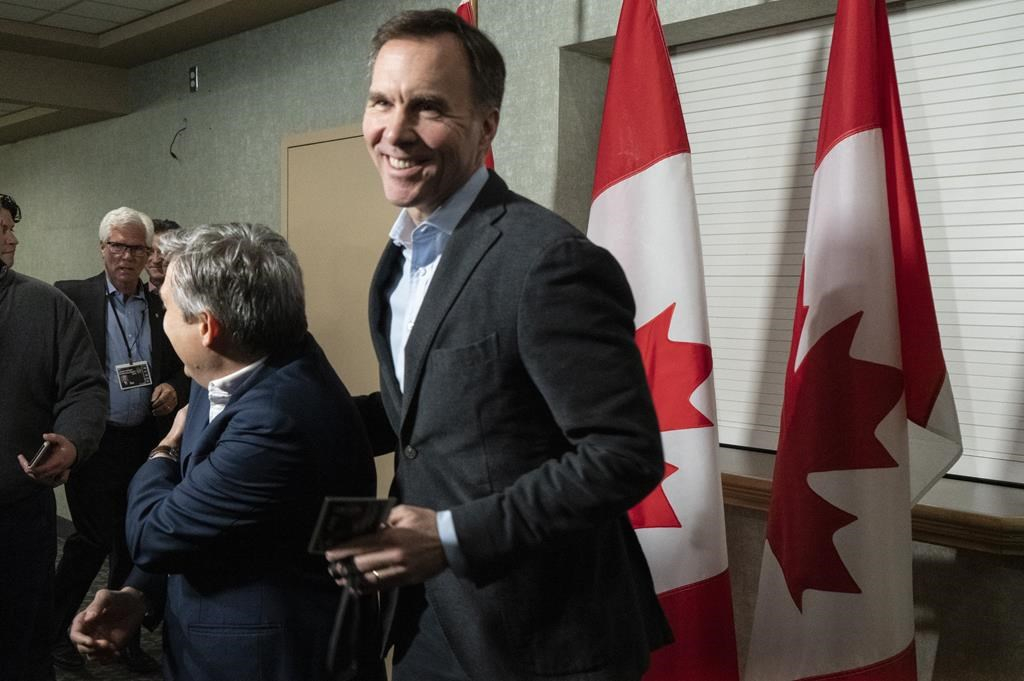 Finance Minister Bill Morneau jokes with Infrastructure and Communities Minister Francois-Philippe Champagne as he arrives for a cabinet meeting in Sherbrooke, Que., on Wednesday, Jan. 16, 2019. Photo by The Canadian Press/Paul Chiasson
Previous story
Next story

Finance Minister Bill Morneau painted a rosy picture of Canada's economic future Wednesday, despite diplomatic and political upheavals around the world that could disrupt global trade and impede growth just as this country prepares to head to the polls in October.

Morneau's upbeat assessment came as he arrived for the start of a three-day cabinet retreat — the first meeting of Prime Minister Justin Trudeau's cabinet since he conducted a small shuffle earlier this week.

The retreat is taking place against a backdrop of chaos engulfing the British government as it tries to extricate the United Kingdom from the European Union and escalating diplomatic tensions between Canada and China.

"We're watching closely what's going on in the United Kingdom. It's obviously an enormous challenge for the Conservative government there," Morneau said.

Canada, which has a free trade deal with the EU, will work to continue a "very strong trading relationship" with the U.K. when — or if — it exits the European Union, he added.

With respect to the Chinese economic powerhouse, Morneau acknowledged that Canadians are increasingly reluctant to pursue business and trade opportunities in China since that country detained two Canadians, Michael Kovrig and Michael Spavor, on national security grounds and sentenced to death another Canadian, Robert Schellenberg, who was convicted of drug trafficking.

Those developments have come in apparent retaliation for Canada's arrest last month of Huawei executive Meng Wanzhou, at the behest of the Americans who want her extradited to face fraud charges related to American sanctions on Iran. President Donald Trump has lent credence to China's contention that the arrest was politically motivated, part of a larger U.S.-China trade war.

"Our ongoing goal, of course, is to have long-term economic relationships around the world that ensure that people can have good jobs here in Canada."

On Wednesday, Trudeau met privately with Raif Badawi's wife, Ensaf Haidar, who asked him to grant her husband Canadian citizenship, apparently hoping that might help secure his release from a Saudi prison.

But some experts fear Canada's decision last week to accept runaway Saudi teenager Rahaf al-Qunun as a refugee will only further enrage the Saudis and cause more negative repercussions.

Morneau acknowledged "there are certainly headwinds with global trade tensions." But he shrugged off predictions that the world may be teetering on the edge of another global recession.

The International Monetary Fund, the World Bank and the Organization for Economic Co-operation and Development are all forecasting "positive global growth expectations," he said. And in Canada, private sector economists "are all looking toward a period of sustained growth."

"So we're not actually looking right now with any expectation of difficult times."

Morneau said the government always needs to be "worried about being resilient in the face of potential challenges." But with the strongest jobs numbers in four decades, he said Canada is well positioned on that score.

Ministers got a briefing about some of the world trouble spots Wednesday evening from six of Canada's envoys, including Janice Charette, the high commissioner to the U.K.; John McCallum, ambassador to China, and David MacNaughton, ambassador to the U.S.

On Brexit, Charette said Canada wants to see a strong U.K., a strong E.U. "and a strong and constructive relationship between the two parties." Both sides will have to show "flexibility and patience" to reach an agreement for an orderly British exit from the E.U., she said.

However, should the U.K. leave the European Union with no agreement, she said discussions have already begun with British authorities about how to achieve a "seamless transition" in which Canadian businesses continue to receive preferential access to the British market.

While Brexit and China are the crises du jour that threaten economic stability, MacNaughton drew attention to an ongoing trade irritant with the United States: punishing tariffs on Canadian aluminum and steel which have remained in place despite Canada, the U.S. and Mexico reaching a deal on a new North American free trade deal.

MacNaughton said he continues to remind American officials, legislators and business leaders at every opportunity that the tariffs are "illegal" and "unjustified" and that the Trump administration's justification for the tariffs on national security grounds is "absurd."