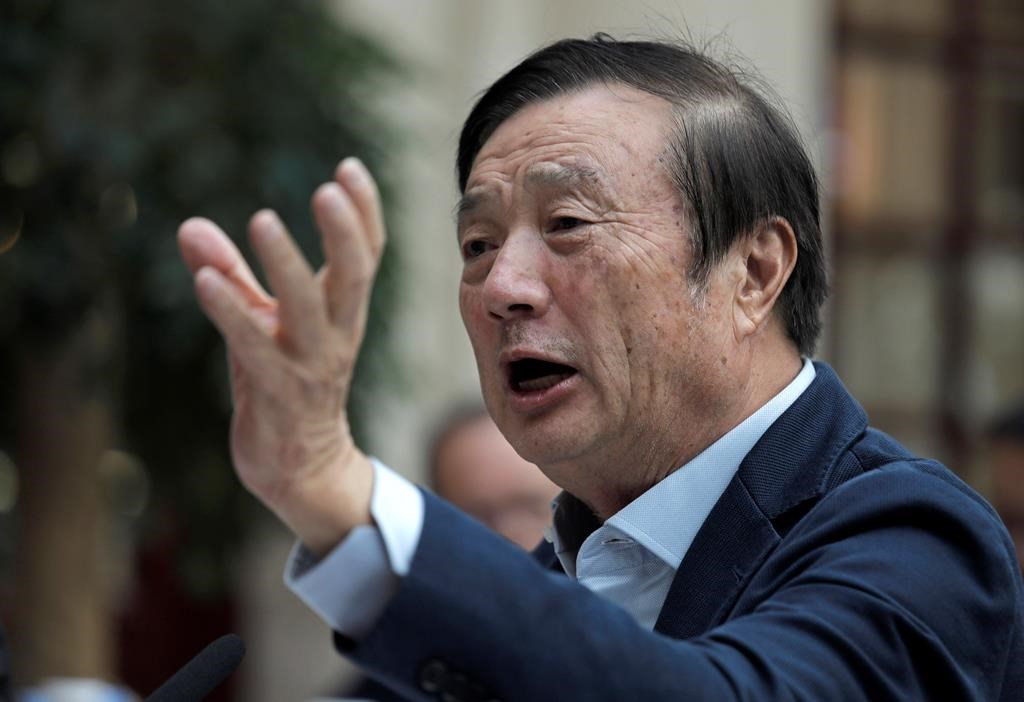 Ren Zhengfei, founder and CEO of Huawei, gestures during a round table meeting with the media in Shenzhen city, south China's Guangdong province, on Tuesday, Jan. 15, 2019. Photo by The Associated Press/Vincent Yu
Previous story
Next story

The United States has denounced a death sentence imposed on a British Columbia man in China as "politically motivated," adding heft to Ottawa's effort to intensify international pressure on Beijing to spare his life and to release two other detained Canadians.

Earlier this week, a Chinese court applied the death penalty to Robert Lloyd Schellenberg, who was originally sentenced in 2016 to a 15-year term for drug smuggling. The court delivered the new sentence after reconsidering his case.

Freeland has asked for clemency for Schellenberg and has called his sentence "inhumane."

On Wednesday, a Chinese government spokeswoman brushed aside Canada's intervention request, saying the courts exercise their powers in accordance to the country's laws, free from interference.

The Dec. 1 arrest of Meng, the tech giant's chief financial officer, has infuriated Beijing. It has demanded her release, warning Canada of severe consequences if it fails to do so.

Diplomatic relations between Ottawa and Beijing have quickly deteriorated since Meng's arrest to the point there are fears they could damage Canada's business relationship with its second-largest trading partner. China and Canada also toughened their respective travel advisories this week, delivering a blow to last year's bilateral effort to boost tourism between the two countries.

Locked in a dispute with a far bigger country, Canada has worked to rally support from the international community.

Speaking to reporters Wednesday, Freeland welcomed the U.S. statement a day after she said she explained the situation to Pompeo.

The statement also sought to address Chinese concerns about the circumstances of Meng's arrest by saying Pompeo and Freeland once again discussed Canada's commitment that it would "conduct of a fair, unbiased, and transparent legal proceeding and U.S. extradition request."

Last month, U.S. President Donald Trump raised questions about the basis of the American extradition request by musing in an interview with Reuters about interfering in Meng's case if it would help him strike a trade deal with China.

Freeland listed a number of allies Canada has called upon to speak out against Schellenberg's death sentence and to support its effort to free Michael Kovrig and Michael Spavor, two Canadians imprisoned in China last month. Spavor is an entrepreneur and Kovrig is a Canadian diplomat on leave who is still an employee of Canada's Foreign Affairs Department.

"Led by the prime minister, our government has been energetically reaching out to our allies and explaining that the arbitrary detentions of Canadians are not just about Canada — they represent a way of behaving which is a threat to all countries," Freeland said after meeting with business leaders in Repentigny, Que., near Montreal.

On Wednesday, Chinese foreign ministry spokeswoman Hua Chunying said Beijing "isn't worried at all" about facing opposition from the international community, according to an English transcript of her remarks that was published on a Chinese government website.

"Actually, you can count by the fingers of your hand the few allies of Canada that chose to side with it on this issue," Hua said.

"These several countries can by no means represent the entire international community. For serious crimes posing great harm to the society like drug smuggling, I believe it is the international consensus that such crimes shall be strictly handled and punished."

Asked about Hua's comments later Wednesday, Freeland said: "As to the notion that the number of allies Canada has is limited, I would just point to the fact that the EU alone, which has issued a statement, is a union of 28 countries."

Prime Minister Justin Trudeau has accused China of acting "arbitrarily" by imposing a death sentence on Schellenberg and has vowed that Canada will do all it can to intervene on his behalf. Trudeau has also warned Beijing's actions should be worrisome for all of Canada's international allies.

Hua called Trudeau's use of the word arbitrary to describe Schellenberg's trial in China as "highly irresponsible" and said it "lacks the minimal spirit of the rule of law."

She was asked several times whether China would accept Canada's request for clemency in the Schellenberg case.

"The people's courts and the people's procuratorates shall independently exercise the judicial and procuratorial powers respectively in accordance with the provisions of the law, free from any interference from administrative organs," Hua said.