Keep it positive in a campaign year, Trudeau tells MPs while attacking Tories 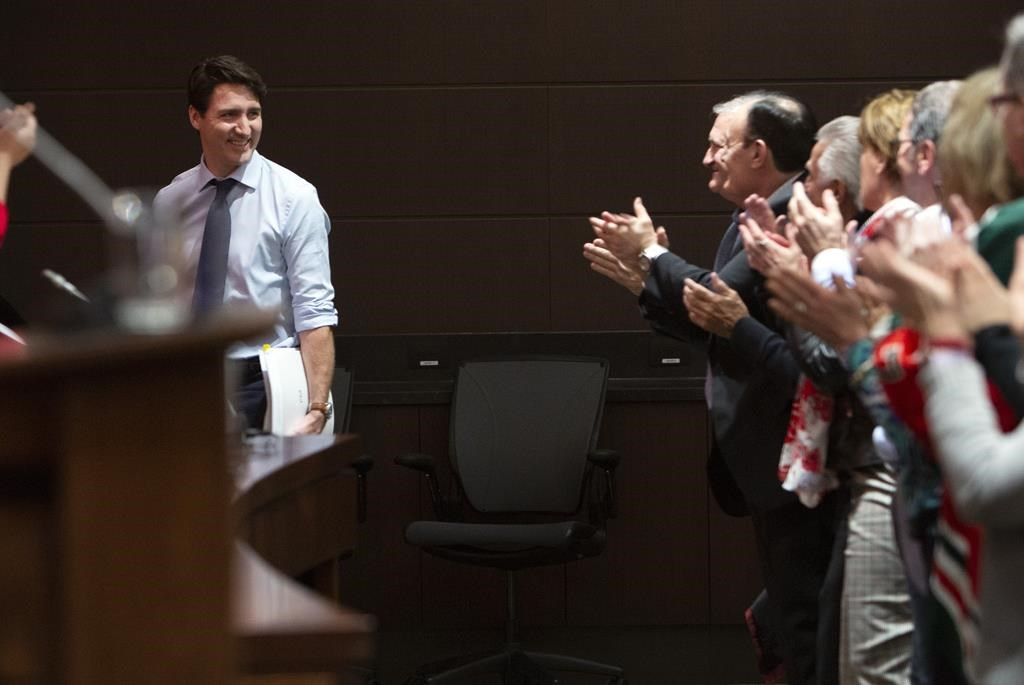 Prime Minister Justin Trudeau sharpened his core re-election message on Sunday, telling his MPs to present a positive message to Canadians while he branded his Conservative opponents as a detached party of the elite.

The prime minister delivered a campaign-style speech at the start of a two-day Liberal caucus retreat on Parliament Hill, characterizing his party as a beacon of hope for Canadians in a world of upheaval. At the same time, Trudeau attacked the opposition Conservatives as a party rooted in the past and mired in the divisiveness of its former leader, Stephen Harper.

While the prime minister wielded political attacks against Harper and current Conservative Leader Andrew Scheer, the message to rank-and-file MPs in the four-hour, closed-door meeting was to keep it positive in their ridings, insiders said.

The MPs discussed the strategy for the federal election in October, where the "importance of a positive message and not personal attacks" was stressed to "contrast with the opposition," one source said.

Much like the party's successful "sunny ways" strategy in 2015, this year's campaign will be "all about positive politics," Health Minister Ginette Petipas-Taylor said after the meeting.

"Our caucus is going to be engaged in making sure that Canadians are aware of the good work that we've done, and also that we want to continue to meet the needs of all Canadians."

Trudeau used his speech to tell his MPs to stay focused on helping Canadians at home in this coming election year, despite the anxiety created by global turbulence.

He referred to the China-U.S. trade war and the pending Brexit divorce of Britain and Europe, as well as the threat of climate change and the economic upheaval of lost jobs to artificial intelligence.

But Trudeau avoided mention of the other woes that have undercut his government's attempts to grow the economy and diversify trade, including the wide gulf in relations with China, and uncertainty about moving forward with Canada's top ally and trading partner — the Trump protectionists in Washington.

Trudeau took several partisan shots at the Conservatives, saying they have no plan for tackling climate change and the economy, while citing Liberal gains in lowering taxes and unemployment. The prime minister singled out the Canada Child Benefit as a boon to working families.

He accused the Conservatives of voting against several of his government's initiatives in an effort to "protect the wealthy, the well-connected, and the powerful," at the expense of working Canadians — even referencing a campaign slogan used by conservative Ontario Premier Doug Ford.

"Make no mistake: The Conservatives pretend to be 'for the people,' but that couldn't be further from the truth. This is still very much the party of Stephen Harper," Trudeau said.

"We have sent a clear signal to the rest of the world — Canadians are ready to work and Canada is best place to do business."

But Trudeau did not mention Canada's personal list of international woes, including its plummeting relations with China after the RCMP arrested Huawei executive Meng Wanzhou on Dec. 1 at the behest of the United States.

"People across the country — and really, around the world — are anxious about what they see happening on the news, and in their communities," Trudeau said.

"The world's two largest economies are at odds, and our founding European nations are going through unprecedented political turmoil."

Trudeau also id not mention the uncertainty surrounding the unfinished economic business with the Trump administration in Washington. This includes ratifying a newly renegotiated North American free trade agreement and getting rid of punishing U.S. sanctions on Canadian steel and aluminum.

Those international headaches could make it more difficult for the Trudeau Liberals to keep the focus on domestic concerns as they navigate their way through an election year.

Infrastructure Minister Francois-Philippe Champagne said he expects to spend a lot of time travelling the country in the coming months, attempting to deliver on government promises to fund thousands of projects to ease public transport gridlock, "green" the economy, and extend growth to less populated communities.

"This is about governing. It's not about campaigning," Champagne said, brushing aside suggestions the infrastructure rollout has been too slow.

Liberal MP William Amos, whose West Quebec riding of Pontiac is two-thirds rural, said his constituents are "impressed by what they've seen so far" from the government.

"But they want more because for a lot of small-town Canadians, job growth hasn't been the same as it has been in urban Canada."

Next Canadian federal election will be target for Russian meddling: Sajjan

Sunny ways, sure. Lie with a

Sunny ways, sure. Lie with a smile.