Oaths on eagle feathers to be allowed in Manitoba RCMP detachments 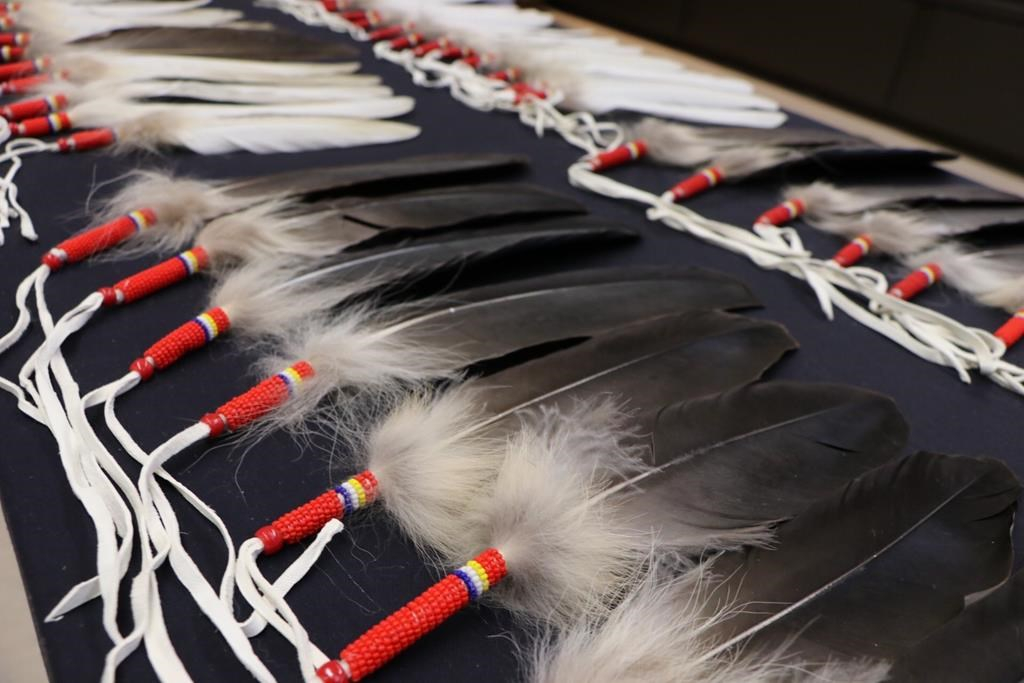 Eagle feathers are shown during a RCMP press conference in Winnipeg on Tuesday, Jan. 22, 2019. Photo by The Canadian Press/Kelly Malone
Previous story
Next story

The head of the RCMP in Manitoba says providing an eagle feather to people swearing oaths is a positive step toward reconciliation with Indigenous communities.

Victims, witnesses and suspects until now have had the option to swear on a Bible or make an affirmation before giving a statement.

"For some the eagle feather provides comfort and strength in their most difficult times. By holding the eagle feather, they find the strength to talk and are empowered to speak the truth," Kolody said at a news conference Tuesday.

"This is what inspired us to bring the eagle feather into our day-to-day police operations."

Mounties will also be allowed to use the feathers to swear in information in court.

Kevin Hart, regional chief of the Assembly of First Nations, said he requested a feather during his own experience with the justice system, because the Bible can be linked to the traumatizing history of residential schools — but at the time it wasn't allowed.

"This is just one of those bridges right now we see to help our people in dealing with the justice system and the RCMP," he said.

RCMP in Nova Scotia were the first to provide eagle feathers in 2017 and as of last November they've been allowed in that province's courts. Hart said he hopes access to the feathers will expand to every area of the country.

Eagle feathers hold a special place in many Indigenous cultures. Hart said they are a symbol of peace, love and a connectedness with the Creator.

The feathers for the Manitoba RCMP were taken from two eagles provided by the province's wildlife branch. Elder Wanbdi Wakita cleansed the plumage during a special ceremony.

The feathers will be placed in red folders, which will also include protocols for how they are to be treated, before they are sent to 87 different locations.

Grand Chief Jerry Daniels, who represents First Nations in southern Manitoba, said he recognizes there have been conflicts between Indigenous people and law enforcement. But he said he hopes the feather will be a step towards repairing the relationship.

"Our faith in the Creator is hopefully that things will be guided in the right direction, and the eagle feather and the spirit of that will hopefully move the direction of the RCMP, and the work that's done with the RCMP, where it's supposed to go," he said.