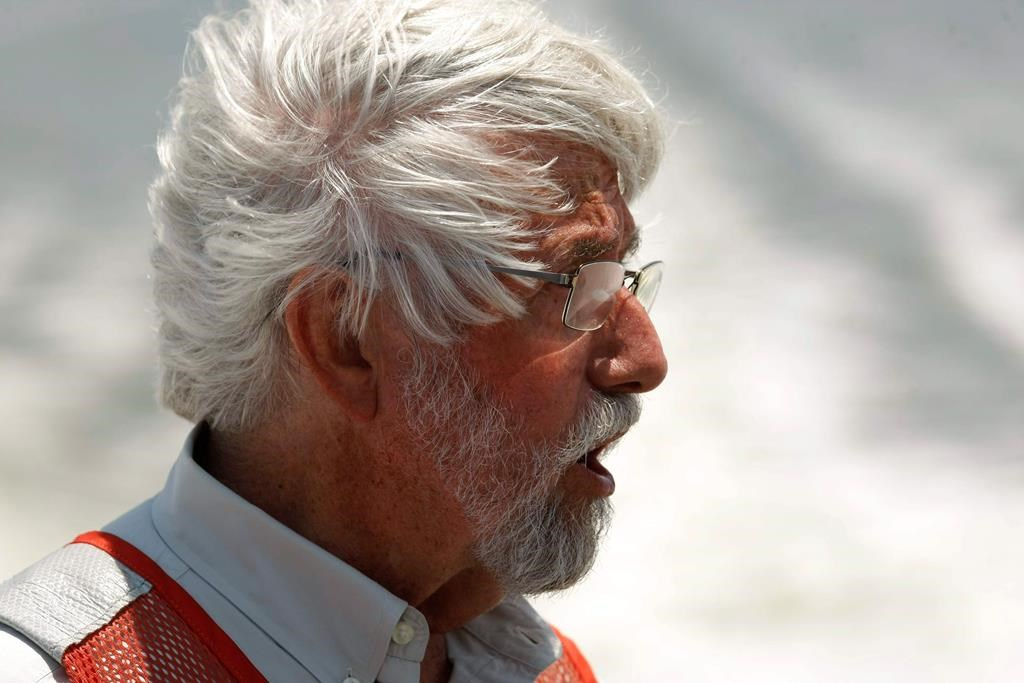 Jean-Michel Cousteau talks to media after he and his expedition team were turned away by U.S. Coast Guard after arriving at the Breton Island National Wildlife Sanctuary on May 18, 2010. File photo by The Associated Press/Gerald Herbert
Previous story
Next story

Even the family that pioneered efforts to protect the worlds' oceans once believed you could throw garbage overboard without consequence.

Jean-Michel Cousteau, environmental filmmaker and son of famed marine conservationist Jacques Cousteau, says when he was a small child and his father first took him scuba diving, they too believed the "ocean was a bottomless receptacle for whatever waste we didn't want on land."

In a new 3D documentary, Wonders of the Sea, being released in Canada on Feb. 1, Jean-Michel Cousteau is hoping to show the rest of the world why that thinking is so wrong.

The documentary comes as many countries, including Canada, are struggling to cut down on the garbage that is destroying the oceans, particularly single-use plastics like soda bottles, grocery bags and food packaging, and abandoned fishing nets and lines. Last year Canada tried to get the G7 nations to sign an anti-plastics charter aiming that by 2030 all plastics will be recycled, reused or burned for energy. Only five joined, with Japan and the United States opting out.

Cousteau said plastics are an issue but so are chemicals, including pharmaceuticals that end up in the water. He also pointed to greenhouse gases, which the ocean absorbs, warming the water and acidifying it. In the process coral reefs, and the marine creatures that depend on them, are dying.

In an interview with The Canadian Press, Cousteau said there are commendable efforts by world governments, including Canada, to tackle some of the problems, but much more has to happen.

"We're doing but we're not doing enough," he said. "We need to do a lot more. Everyone has to understand."

He said it's not about criticizing people for their actions, but rather educating them about their impact, much as he had to be educated himself.

"When I was a kid I was doing it too," he said. "I had no knowledge, I had no education. I would throw things in the ocean just like everyone else would."

His eye-opening came when his own childhood playground, the harbour in Sanary Sur Mer in southern France, became dirtier, and the octopus and fish he loved to swim with started disappearing.

"I was devastated to see where I grew up was being destroyed," he said.

The oceans, said Cousteau, are the difference between human survival and extinction. Phytoplankton, one-celled organisms that live on the oceans' surface, produce half the earth's supply of oxygen. It means, Cousteau notes in the film, "that every other breath you take is a gift from the ocean."

Likewise the oceans are part of the water cycle providing the other critical element to human survival.

"We depend on the ocean, we depend on what's in the ocean for the quality of life of every species whether it's on land or in the ocean — and that is water," said Cousteau. "No water, no life."

Cousteau said Canada's ocean protection policies are notable, including its attempts to save the Southern Resident Killer Whales. Those whales, two of which are named after Cousteau's famous father and his research vessel, Calypso, are dying out. No new calf has survived in the last three years.

A new calf spotted in early January has a 50 per cent chance of surviving.

The Liberal government in Canada has been criticized by many marine conservationists for pushing on with the new Trans Mountain pipeline expansion despite its potential impact on the whales. A Federal Court of Appeal decision last year tore up the government's approval for the expansion partly because it didn't consider the impact on the whales when giving the project the green light. Canada is now trying to redo the consultation process to prove it is taking steps to protect the whales.

Cousteau did not wade into that debate directly, but he says oil is a problem for marine life, as are the thousands of boats that traverse their habitat every day.

"I don't want the oil industry to go out of business," he said. "I want them to invest all their giant profits that they make into new sources of energy."