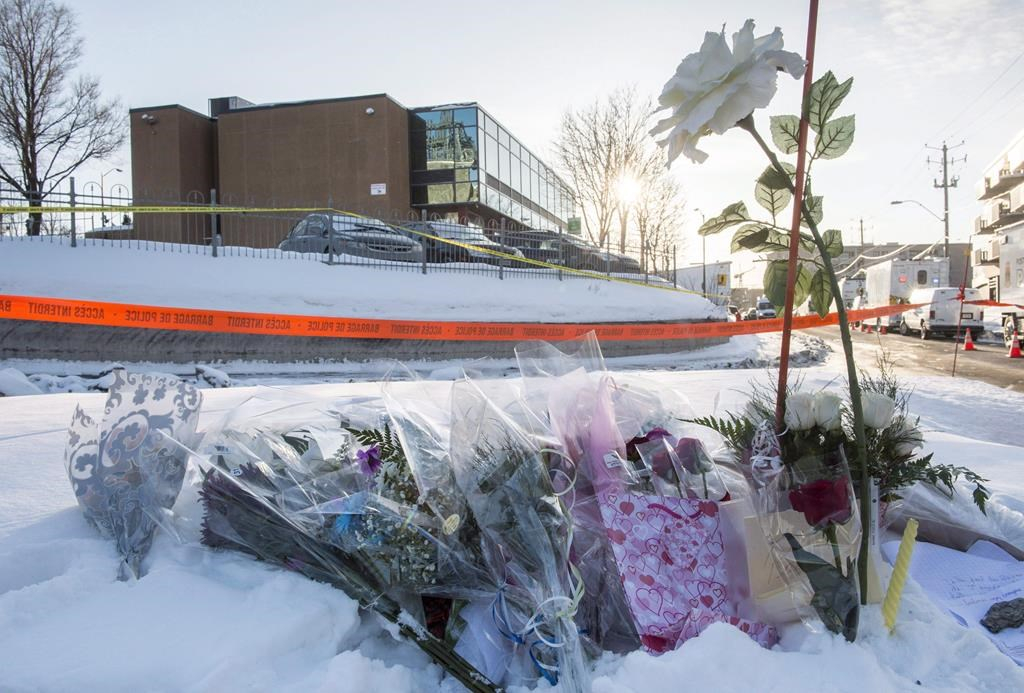 Flowers are seen near a mosque where a Sunday night shooting left six people dead and eight others injured on Monday, January 30, 2017 in Quebec City. File photo by The Canadian Press/Paul Chiasson
Previous story

The widow of one of the victims of Quebec City's mosque shooting has won her battle for compensation just days before the anniversary of the tragedy, her lawyer said Sunday.

Lawyer Marc Bellemare said Khadija Thabti and her children have been recognized as victims of crime by the provincial body that compensates them.

Bellemare said the decision means Thabti will be reimbursed for lost income and travel fees and can obtain the psychological help she needs.

"Being recognized as a victim changes everything," he said in a phone interview.

Thabti's husband, Aboubaker Thabti, was one of the six men who were killed when a gunman stormed a Quebec City mosque on Jan. 29, 2017.

Bellemare said the widow was twice turned down for compensation because she hadn't been at the scene of the crime as it occurred — something he described as "ridiculous and contrary to the law.

"The law requires that the person has suffered a mental shock during an indictable offence," the lawyer said in a phone interview.

"Therefore, the person could have suffered it in arriving to the crime scene, or being confronted with images of horror while worrying that the safety of a loved one is threatened. That's post-traumatic stress: you don't have to be there when the bullet comes out of the rifle."

Bellemare said provincial Justice Minister Sonia Lebel intervened in the case on Friday to help bring it to a close, just days before the two-year anniversary of the shooting.

Bellemare, himself a former provincial justice minister, said there needs to be a change in the approach taken by the decision-makers at the Indemnisation des victimes d'actes criminels, or IVAC.

"We're playing with people's nerves," he said, adding that not being able to access resources "complicates therapy, it creates insecurity, and debts accumulate."

The deadline to submit a request for compensation from IVAC is Tuesday, the second anniversary of the shooting.

Bellemare said that if any other victims need help fighting for access to resources, he'll represent them for free.