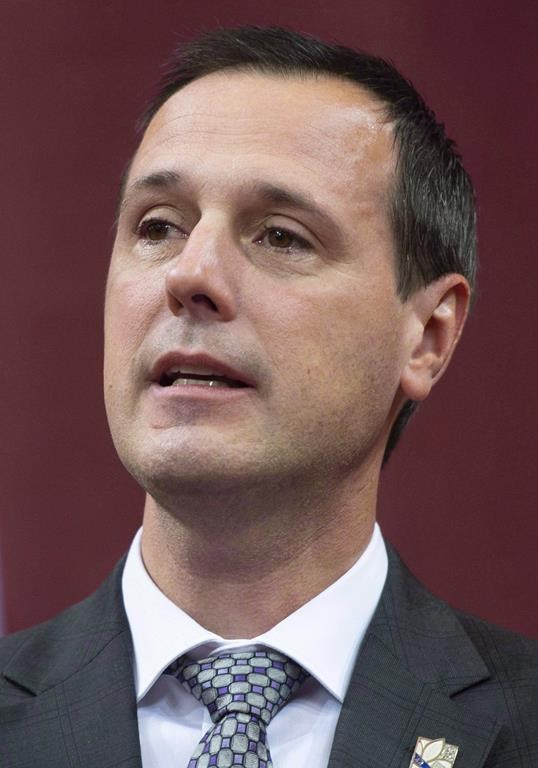 Quebec Education Minister Jean-Francois Roberge is sworn in during a ceremony at the National Assembly in Quebec City, on Thursday, Oct. 18, 2018. File photo by The Canadian Press/Jacques Boissinot
Previous story
Next story

A Quebec government initiative to determine how many teachers wear religious symbols also extended to include police officer, prosecutors and the judiciary, the minister responsible said Monday.

Simon Jolin-Barrette, Quebec's Minister of Immigration, Diversity and Inclusion, confirmed that the government has approached school boards, the provincial police and its own Justice Department to ask about the wearing of religious symbols.

"We received a mandate from the population to present legislation on secularism aimed at people in authority like judges, prison guards, police, Crown prosecutors as well as teachers — that they don't wear religious symbols while at work — and I plan to table a bill in the spring," Jolin-Barrette said.

Quebec school boards pushed back against the initiative Monday, calling it an attempt at profiling. The Coalition Avenir Quebec government has said its bill would prohibit public servants in positions of authority — including teachers — from wearing such symbols as the hijab, kippa or turban at work.

At least three school boards in the Montreal area received calls from the Education Department last Friday asking if they keep records of how many board employees wear religious symbols. The head of Quebec's largest school board said she was outraged by the inquiry.

"I was flabbergasted. I found it was an unfortunate request, because we cannot profile our employees on the fact they wear religious symbols," said Catherine Harel Bourdon, head of the Commission scolaire de Montreal. "It goes against their rights and freedoms, so I was surprised the ministry was seeking this type of information."

Harel Bourdon said the board told the department it does not collect such information. "We don't want to get into a witch hunt with employees," she said. "We will respect and protect them on this question."

Francis Bouchard, a spokesman for Education Minister Jean-Francois Roberge, insisted no formal request for a tally was made — rather a number of school boards were called to determine whether such information exists. Bouchard accused the boards of manufacturing a controversy.

Relations were already strained between the province's school boards and the new government, which has vowed to eliminate the boards in favour of new service centres. "This is a false scandal created where no scandal exists by the school boards," Bouchard said.

But the president of the Federation des commissions scolaires du Quebec — which represents French boards across the province — said member commissions got the clear impression that a head count was being sought. "They were asking for a number, how many there were," Alain Fortier said.

Fortier said he told the three boards that fielded the calls to hold off answering until the federation sought an in-house legal opinion. The legal advice was that gathering personal information and sharing it without consent from those affected could subject boards to possible legal trouble.

Jolin-Barrette said he did not know how many school boards were approached, and he could not say whether responses had been received to its queries concerning provincially appointed judges and prosecutors. Martine Asselin, spokeswoman for the provincial police, said the force was asked by the government in December whether it had any members wearing religious symbols. She said there are none.

Constitutional lawyer Julius Grey said he sees no legal obstacle to counting how many employees wear religious symbols, but school boards are under no obligation to provide the information.

And he questioned why the government would be asking a "foolish" question when there are so many other pressing problems in the province's schools. "It's a question that will provide nothing and that illustrates the preoccupation of Quebec governments since 2013 with a problem that is not a problem, that constitutes a waste of time for everyone," Grey said.

Sonia Ethier, president of one of the province's main teachers' unions, said the government had no business seeking the information from school boards. "This is information that should remain personal," she said. Her union, the Centrale des syndicats du Quebec, represents 65,000 teachers.

"Our members don't talk about religious symbols. They talk about investments, adding services in schools," she said.