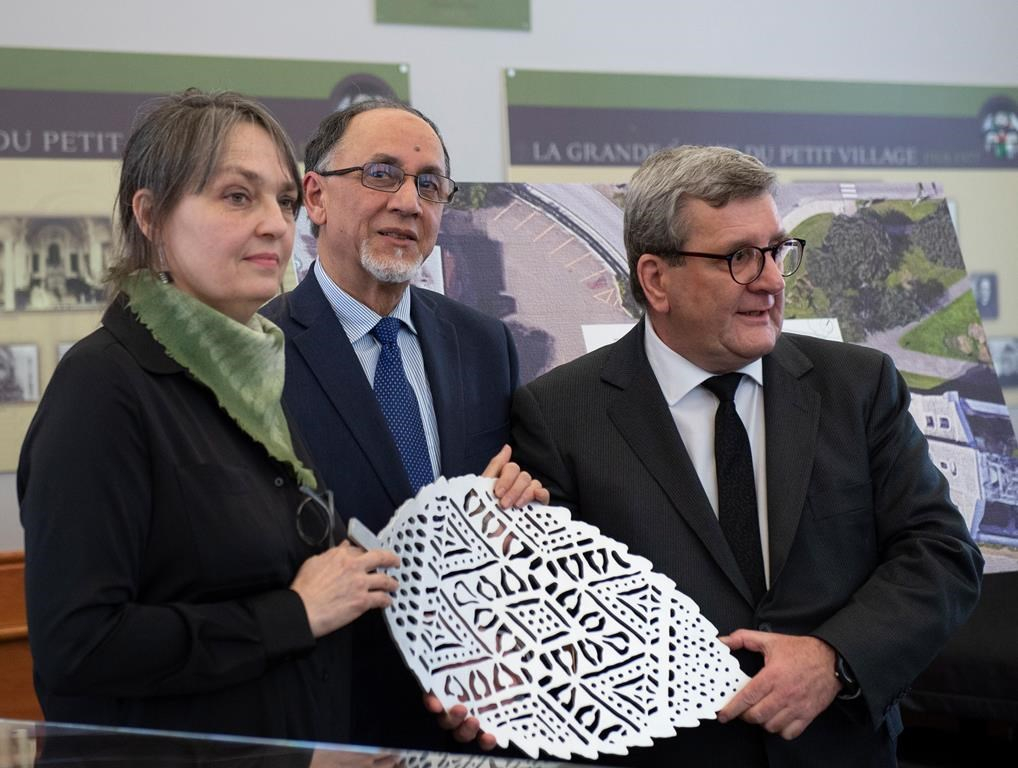 Luce Pelletier, Boufeldja Benabdallah and Regis Labeaume hold one of the six metal leafs representing one of the six victims of the 2017 Mosque shooting, on Jan. 29, 2019 in Quebec City. Photo by The Canadian Press/Jacques Boissinot
Previous story
Next story

Two years after a gunman killed six worshippers in a Quebec City mosque, banners with the names and faces of the victims were unfurled Tuesday night as a word chosen by family members to describe their loved one was read out.

It was one of many emotional moments as hundreds of people gathered at Universite Laval for the ceremony paying homage to the victims.

"I have trouble imagining the feeling of horror that must have overcome you faced with all this violence," Premier Francois Legault said, addressing the victims' families. "I hope that you feel this breath, this gust of solidarity. I hope it brings you a little comfort. That is the true face of Quebec: a united people who know how to show solidarity."

Khaled Belkacemi's children, Megda et Amir, thanked the first responders who arrived at the mosque on the night of Jan. 29, 2017, as well as "all those who speak of acceptance and of peace."

Politicians from all three levels of government were in attendance, as were representatives of the Christian, Muslim and Jewish faiths.

Earlier in the day, Quebec City announced it would honour the victims of the shooting with a memorial park to be built near the site where they were gunned down.

Mayor Regis Labeaume said the tragic event left families and an entire community in mourning, and the memorial will ensure the victims are not forgotten.

"This artistic creation invites dialogue and friendship, on one side of the street and on the other," Labeaume said. "The concept inspires respect and harmony between diverse communities."

The centrepiece of the park will be a monument created by Quebec artist Luce Pelletier called "Vivre Ensemble" (Live Together). She said she chose to place a tree in the middle to represent "the cycle of life and the resilient force of nature." The park is slated to be inaugurated on Jan. 29 2020.

Boufeldja Benabdallah, president of the Quebec Islamic Cultural Centre, was present with widows and children of the victims at the unveiling of a scale model. "Violence can and must be converted into friendship, kindness and recognition," Benabdallah said. "That is the meaning of this memorial."

Alexandre Bissonnette pleaded guilty to the killings last year and is to be sentenced Feb. 8 on six counts of first-degree murder. If the judge orders that the six life sentences be serviced consecutively, Bissonnette would not be eligible for parole for 150 years.

In Ottawa, the Canadian Muslim Forum and Canadians for Justice and Peace in the Middle East, called on the federal government to declare Jan. 29 a national day to combat Islamophobia. Canadian Heritage Minister Pablo Rodriguez said the federal government is still in discussions to identify a suitable way to commemorate the tragedy.

"We will arrive at a solution that reflects a consensus, because these are questions that require a consensus to go forward," he told reporters.