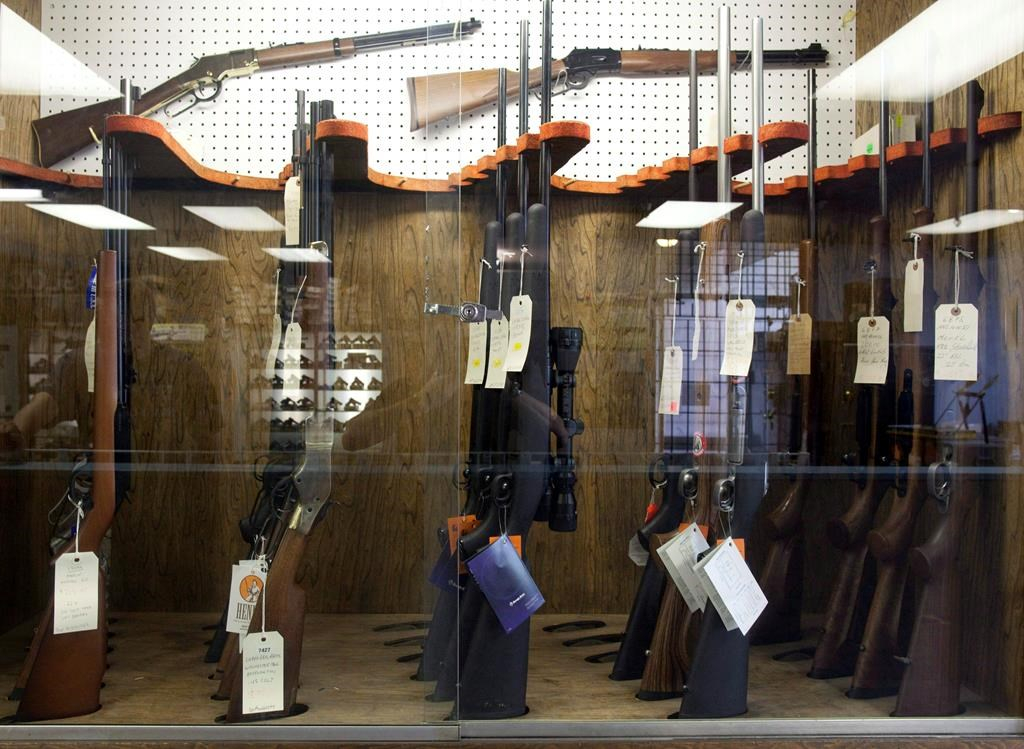 Hunting rifles are seen on display in a glass case at a gun and rifle store in downtown Vancouver, on Wednesday, Sept. 15, 2010. File photo by The Canadian Press/Jonathan Hayward
Previous story
Next story

A revolt is brewing in small towns across Quebec against the provincial law forcing long-gun owners to register their firearms with the government.

As the deadline to register shotguns and rifles passed this week, 75 per cent of the long guns believed to be in the province had not been registered. And a growing number of rural town councils are adopting resolutions denouncing the registry or calling for it to be scrapped entirely.

The Canadian Press confirmed Wednesday that at least 15 towns recently passed such resolutions. Philip Tetrault, mayor of Warden, a town of 400 residents about 100 kilometres east of Montreal, said the registry is useless and will end up like the federal version, which was dissolved by the Conservatives in 2012 following major cost overruns.

"In a few years, it'll be abolished," Tetrault predicted in an interview. "The registry might be popular in Montreal and Quebec City, but the majority of people (in Warden) are against it." He said the government should take the tens of millions of dollars it expects to spend on the registry over the next few years and use it for mental health care.

Louise Quintin, spokeswoman for Quebec's Public Security Department, said Wednesday close to 15,500 guns were registered on the deadline date Jan. 29. But so far, only 386,253 guns have been registered out of an estimated 1.6 million in the province. The registry is budgeted to cost $20 million to set up and then $5 million a year to maintain.

Canadian law classifies guns in three categories. Prohibited guns such as automatics and restricted guns such as handguns must be registered with the RCMP. Long guns — rifles and shotguns that are mainly used for hunting and sport shooting — no longer need to be registered in Canada, except in Quebec.

Gun owners were given a year to register, either online or by mail, and there is no charge. But those who fail to comply could face penalties up to $5,000. Quintin said applications received after the deadline will be processed without penalty.

She said it is up to the police to enforce the law.

"If a peace officer comes into contact with a person in possession of a firearm, he or she has the power to examine the firearm and check whether it is registered," Quintin said by email. Gun ranges or hunting clubs don't have to check if firearms are registered, nor are they required to hand over information on members to the government, she added.

A recent Leger poll conducted Dec. 21-26 for a gun control lobby group, indicated 78 per cent of respondents were in favour of the registry. Remi Montminy, town manager of St-Francois-de-la-Riviere-du-Sud, said his 1,600-person town northeast of Quebec City conducted its own survey and found that 82 per cent of respondents rejected the registry. The poll was unscientific, and about 100 residents took part, he said.

St-Francois-de-la-Riviere-du-Sud is among the towns calling for an end to the registry. Montminy said the gun law, adopted by the previous Liberal government, is being maintained by the new Coalition Avenir Quebec government because politicians cater to urban voters.

Nicolas Malette, mayor of Cayamant, a town of about 900 residents north of Ottawa, said his council adopted a resolution against the registry at a special meeting last week.

"Will it make a difference? Maybe, maybe not," he said. "But we adopted the resolution to support our citizens, who are mostly hunters. We're trying to pressure the government."

Most people no longer hunt

Most people no longer hunt for sustenance. Sport hunting should be prohibited given the catastrophic decline in wildlife world wide. Farmers use of long guns in the pursuit of "vermin" is within the scope of allowability, perhaps. depending on the definition of "vermin". Given the aforementioned wildlife decline, "commercial hunting/trapping" should be eliminated with extremely rare exceptions. It is quite evident that the use of animal products, fur, hide etc. is entirely optional and the slaughter of animals for the spurious "medicinal effects" of their organs, horns, etc. must be acknkowledged as a criminal enterprise. Equally, the capture, or enslavement of wild animals for the pet or entertainment industries should be elevated to to a serious felony, punishable by significant fines and jail time. Murder is not limited to human on human actions. Much of what passes for hunting these days is best described as murder.

Those few peoples who still depend on hunting, trapping and fishing for their livelihood should be permitted to retain that right - but only with the caveat that they do not make commercial use of their practice.