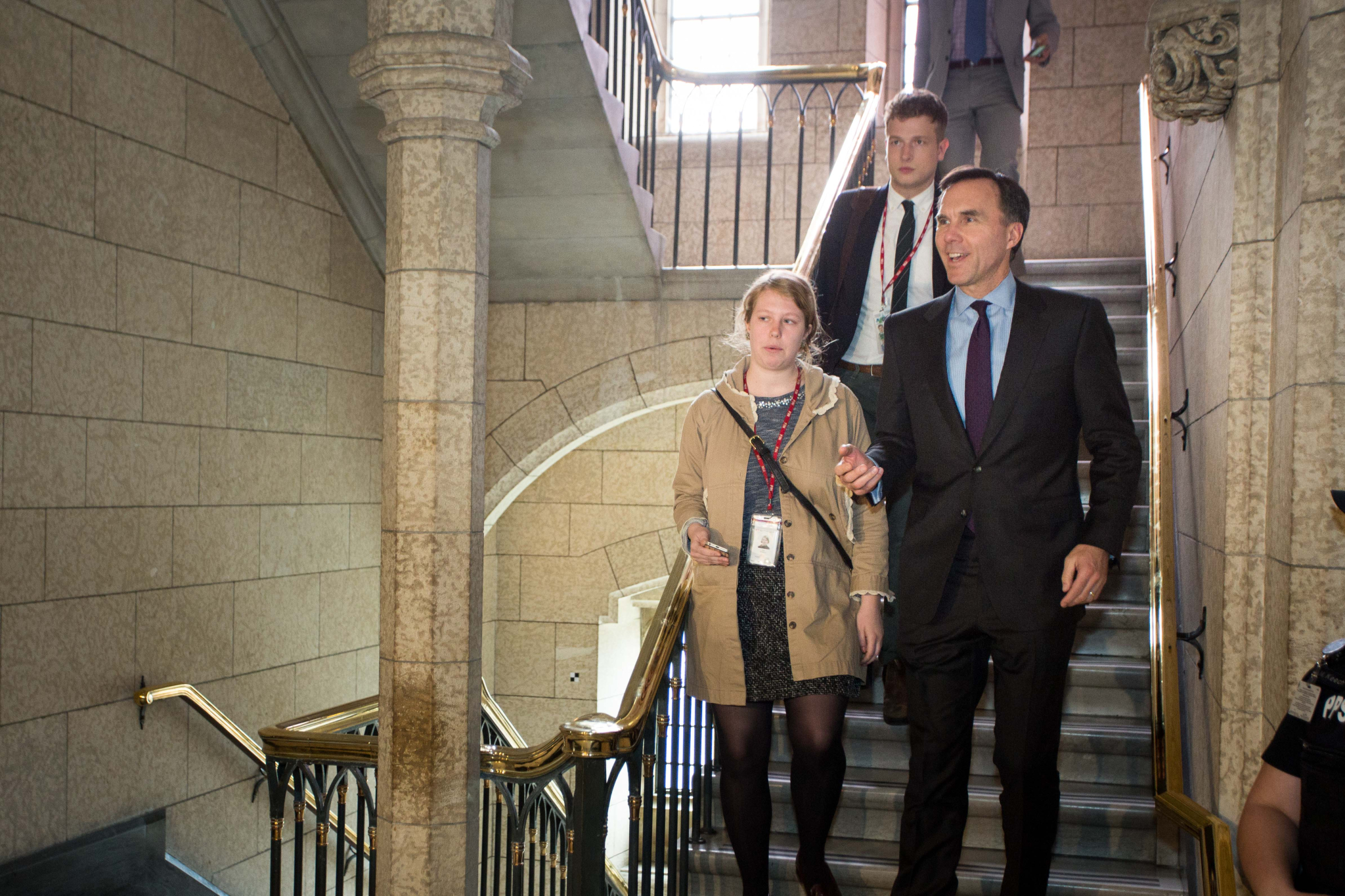 Finance Minister Bill Morneau gestures at reporters as he walks toward the House of Commons in Ottawa on May 2, 2017. Morneau led the government's negotiations to purchase the Trans Mountain pipeline and related assets. File photo by Alex Tétreault
Previous story
Next story

The Trudeau government faces a significant risk of having overpaid for the Trans Mountain pipeline project, after shelling out "at the higher end" of its value, leaving virtually no room for an expected construction delay, possible cost overruns or other factors, says Canada's parliamentary watchdog.

Parliamentary budget officer Yves Giroux said in a report released Thursday that the Alberta-B.C. pipeline and expansion project has a value between $3.6 billion and $4.6 billion.

As such, at $4.4 billion, "the government negotiated a purchase price at the higher end of the parliamentary budget office (PBO)'s valuation range," the report stated, and could have overpaid by nearly a billion dollars.

"If it was a car, we'd say they paid the sticker price," said Giroux, implying the federal government didn't negotiate any rebates or other sweeteners that could have lowered the cost.

The expansion project, running from Alberta's oilpatch to a terminal in Burnaby, in metro Vancouver, would triple the capacity of the existing pipeline to 890,000 barrels a day of bitumen and other petroleum products.

The purchase price "less the amount of tax advantage" was actually $4.1 billion, which would put it in the middle of the PBO's value range, he argued on Parliament Hill following the report's release.

Kinder Morgan had estimated in a regulatory filing that it would pay at least $325 million in capital gains taxes to Canada, reducing the "net price" to $4.175 billion.

“I think what the PBO report said was, in fact, first of all the decision to purchase...was a good economic decision, and second of all that we paid an appropriate price,” said Morneau.

Yet the PBO said its financial valuation "assumes that the pipeline is built on time and on budget." It then said there was likely to be a construction delay.

The office assumed an operation date for the expansion project of Dec. 31, 2021, a date which comes from an August 2018 filing by Kinder Morgan.

That date now appears "very optimistic," said Giroux. "All indicators point that there will likely be a delay in construction," he said.

On Aug. 30, 2018, cabinet's approval of the project was quashed by the Federal Court of Appeal, and construction was suspended as a result of the ruling.

The federal court quashed the approval based on what it said was a flawed process at the National Energy Board (NEB) and a failure of the government to fulfill its duty to consult First Nations.

Natural Resources Minister Amarjeet Sohi told the NEB to reconsider its recommendations and deliver a new report by Feb. 22, which is in approximately three weeks. The government also appointed a former Supreme Court justice to oversee new Indigenous consultations.

Prime Minister Justin Trudeau continues to face opposition to the pipeline from some First Nations leaders. In December, he told Neskonlith Band chief Judy Wilson, secretary treasurer of the Union of B.C. Indian Chiefs, to "respect people’s choices" if they supported the project.

"We're in the midst of responding to the decisions of the court of appeal," Morneau said, speaking in French. "It's very important to have discussions with Indigenous peoples. This is our approach at the moment and it's necessary to have an approach that will give us an opportunity to make a decision that is good for the project. What I can tell you now is that this is what we're doing. I have nothing else to say."

Meanwhile, the NEB decided to accept comments through Jan. 31 on whether it should consider all climate-related impacts related to the pipeline project. A legal motion by environmental advocacy group Stand.earth argued that building new fossil fuel infrastructure would ultimately make it harder to keep climate change in check.

The Intergovernmental Panel on Climate Change has concluded that the world must drastically cut its carbon pollution each year, until it is roughly half of 2010 levels by 2030, in order to avoid damage to ecosystems and irreversible changes to the climate.

Giroux's office was forced to rely on publicly available sources such as company disclosures, media releases and market information when calculating its estimate of Trans Mountain's value.

Morneau's Finance Department had classified the information it provided to PBO as confidential, Giroux said. The department told the PBO that revealing them to the public would disclose proprietary information that is considered "commercially sensitive."

For example, the PBO said it couldn't access publicly-available data to make financial estimates concerning the Puget Sound pipeline system, which is one of the related assets that were scooped up by the federal government as part of its purchase.

Puget Sound is a 111-kilometre pipeline arm of the Trans Mountain system that transports up to 240,000 barrels per day to Washington state in the U.S. It's currently owned by a subsidiary of Canada Development Investment Corporation (CDEV), the Canadian Crown corporation which now owns and operates the pipeline.

Other assets included oil terminals in Edmonton, Kamloops and Burnaby, the Sumas terminal near Abbotsford and the Westridge Marine Terminal, also in Burnaby. "There was not enough publicly-available data for PBO to conduct a financial valuation of these assets," the report stated.

Giroux said he could still access the information in order to validate his analysis, which he did. He called this a "reasonable" situation, especially given the alternative: being denied access to Finance-held documents entirely.

Still, Eugene Kung, staff lawyer at West Coast Environmental Law, said this showed how the government's purchase of Trans Mountain is not being handled in a transparent manner.

Giroux is "relying on publicly available information, which — with the rapidly-changing pace of this story — is kind of out of date," said Kung in an interview. Kinder Morgan’s security filings, for example, pre-date the federal court of appeal ruling.

While he said the report provided great analysis and a body of useful information, the government's complex ownership structure of the pipeline makes it harder to follow the money.

"I think Canadians deserve to know the true cost of what this thing is going to have them on the hook for," said Kung. “This is a little bit more information, which is good, but it’s still far from the whole picture.”

Sidney Ribeaux, executive director of Montreal-based non-profit Équiterre, said the PBO report showed the expansion project was "a bad deal for the environment and a bad deal for Canadians."

'I'd love to see these guys at an auction'

In Question Period on Thursday, the federal NDP lieutenant for British Columbia, Nathan Cullen, said the report showed the Trudeau government had “panicked."

He compared the purchase to paying top dollar for a house without insisting on a home inspection, only to find out later that the roof was leaking.

"I’d love to see these guys at an auction — they’d just keep bidding against themselves," he quipped.

“Will the Liberals just stop this nightmare — stop throwing good money after bad — and actually start investing in the green economy?"

Morneau responded that the pipeline purchase was good for the Canadian economy, and accused Cullen of not reading the report.

“We are dependent right now on sending 99 per cent of our resources to U.S. markets,” he said, referring to Canada's export market for Western crude.

“If there’s ever a time that Canadians believe we should diversify our markets, now is the time."

Canada depends on U.S. refineries to process its oil, the NEB has said, as three-quarters of Western crude is heavy oil with high amounts of sulphur, while Canada’s refineries are largely configured to process light crude.

Conservative Party natural resources critic Shannon Stubbs said in a statement that taxpayers were "on the hook for a depreciating asset that the Liberals have no desire to actually develop."

“When the Liberals purchased the Trans Mountain pipeline they guaranteed the purchase would get the pipeline built. Three years after approval, there is no start date in sight," she said.

"Every day construction is delayed further undermines Canada’s reputation as a stable and predictable place to invest."

The PBO's price estimate of $4.4 billion reflects the net price it calculated after adjustments, less than the $4.5 billion price tag that has been reported, but close to the $4.427 billion interim price indicated in Crown corporation documents.

The office said a 10 per cent increase in construction costs would lower its value by $453 million, while completing the project one year behind schedule would reduce the value by $693 million.

As well, a two per cent increase in the discount rate would reduce its value by $1.275 billion. That is the rate at which the value of future cash flow is determined and it is based on perceived risks.

PBO estimated that the peak annual impact of the project on Canada's GDP would be 0.11 per cent in 2020, falling to zero in 2022, having made its biggest impact during construction. Similarly, employment impact would peak at 7,900 jobs in 2020 and decline after.

Giroux's figures are calculated assuming Kinder Morgan's $9.3 billion construction cost, but changes to the date that the expansion project comes into service could change its value depending on toll adjustments due to interest, the PBO said.

Oil pipelines earn revenues by charging tolls to companies that ship petroleum products on its infrastructure. CDEV is also incurring interest charges on the loan it took out to finance the purchase. However, tolls are regulated by the NEB and so have only a limited flexibility, the PBO noted.

The government and other pipeline proponents say the expansion project is key to getting more Canadian crude to the Pacific coast of the United States and Asian markets, and reducing the price difference Canada's crude receives in North American markets.

The PBO said it was difficult to estimate the impact of the pipeline on that price difference, between the blend of Western crude oil, called Western Canadian Select, and the other major North American oil benchmark, West Texas Intermediate.

A large difference in the price hurt smaller producers in Alberta this fall and led to Alberta Premier Rachel Notley to cut oil supply, and Ottawa stepping in to provide financial support. But the price difference has improved recently, leading Notley to boost oil production again this week.

A reduction of US$5 per barrel in the price differential would translate to a $6 billion annual GDP impact from 2019 to 2023, said PBO.

"Increasing transportation capacity once the (pipeline) is operational could also increase the volume of oil being produced and exported by Western Canadian oil producers, which is another channel for economic impact," reads the report.

Editor's note: This story was updated at 3:30 p.m. ET on Jan. 31, 2019 to add reaction from Morneau, Kung, Ribeaux, Cullen and Stubbs, as well as additional information.

Carl..how about adding some more climate related context ...like how this decision to buy and build a dilbit expansion pipeline contradicts their internal government prediction of a 115 million tonne CO2 shortfall in meeting the Harper Paris Accord pledge?

Recognize the reality that

Recognize the reality that the purchase of Trans Mountain is a "road into a deep swamp" that likely is where the road ends. Turning around is still an option for survival in spite of the costs.