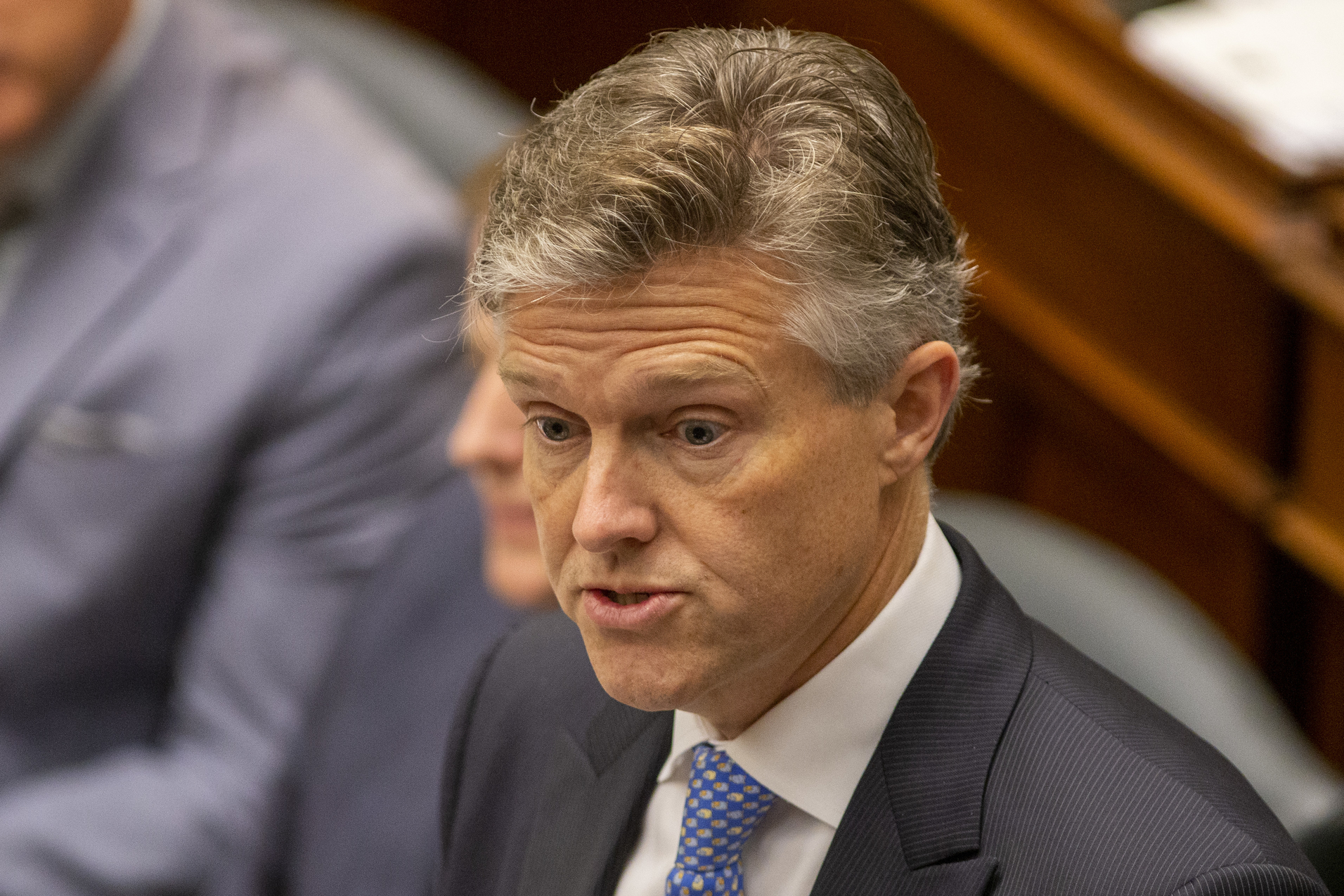 Canada's most populous province is proposing to eliminate the mandatory reporting of carbon pollution from the fuel sold by oil and gas companies — a requirement that is among the last remnants of Ontario’s cap and trade program.

Ontario Premier Doug Ford's government said Thursday that it was "streamlining and updating" its greenhouse gas emissions program "to reduce unnecessary costs and regulatory burden." A public consultation on the matter is open until March 8.

The government is looking to remove mandatory reporting and verification for the emissions from fuel sold by Ontario oil and gas companies. Industry would no longer have to report on emissions coming from "the consumption of the fuels they supply or distribute."

This data "is no longer needed," said a spokesperson for the Ontario Environment Ministry in an emailed statement, since the former Liberal government’s cap and trade program was canceled by the Ford government in November 2018.

The requirement had stemmed from a compliance obligation under the former cap and trade program.

The proposal to make these changes was posted on the Environmental Registry of Ontario at midnight Feb. 7. It targets petroleum product suppliers, natural gas distributors and other large emitters, and seeks to adopt federal emissions data so as to reduce the reporting burden on the province and ensure that reporting is not duplicated.

The reporting of direct emissions would still be mandatory, including emissions produced by refining facilities and pipelines. The changes “would have no impact on how the government tracks emissions from these sources,” the proposal notice stated.

"The proposed change relates only to reporting on the emission from the fuel (industries) sell," said the spokesperson.

It wasn’t immediately clear whether the Ontario government would still be able to calculate the breakdown of emissions from the fuel sold by oil and gas companies if it followed through with its proposal.

The environmental registry posting states that the provincial emissions inventory “has always used data from the federal National Inventory Report for these emission sources,” referring to Canada’s official submission to the United Nations climate change framework.

This data would continue to be used to track progress for Ontario’s 2030 emissions target, it said. Ontario aims to reduce carbon pollution by 30 per cent from 2005 levels.

Environmental economists and advocates said Thursday they were unsure whether the government’s proposal amounted to an administrative move, or if it had deeper implications for the ability of officials to accurately track carbon pollution. The Ford government has attacked the Trudeau Liberals on their plan to price pollution nationwide, and launched a constitutional legal challenge against it.

The federal carbon pricing system includes a fuels charge that kicks in for Ontario beginning in April. The fuels charge requires fuel suppliers to reduce the emissions intensity of the fuels they sell. In order to do that, the fuel being sold must be compared against a federally-designed baseline. Veronica Petro, a spokesperson for Environment and Climate Change Canada, told National Observer in an email the these proposed chance "does not impact the implementation of the federal carbon pollution pricing system."

The federal emissions reporting requirements are largely similar to those in Ontario and employ the same threshold for greenhouse gas emissions, Petro said. It wasn't clear if emissions were fuel sales were included in these requirements, although Petro said "the federal program has also been expanding its requirements to collect additional information related to emissions from facilities in specific industry sectors, and to require the use of specific methods to determine their emissions."

Ontario's proposed changes, then, "could actually be a reasonable housekeeping measure if in fact the (federal government) has all this data, because when it comes to implementing the clean fuel standard and the impending carbon backstop, data is key,” Greenpeace senior strategist Keith Stewart said in an interview.“If, however, this is an attempt to throw a roadblock in the place of policies the Ford government doesn’t like, by making accessing data harder. then that’s a problem,” Stewart added.

“If, however, this is an attempt to throw a roadblock in the place of policies the Ford government doesn’t like, by making accessing data harder. then that’s a problem,” Stewart added.

“This move may reduce our understanding of the effects of emissions from the fuel industries sell,” said Ontario Green Party leader and MPP Mike Schreiner in an email. “Timely, accurate emissions information will help us optimize climate action.”

The opposition NDP saw the changes as an anti-environmental decision. MPP Ian Arthur said in a statement the proposal was “yet another demonstration of Doug Ford’s willingness to attack our environment, and his refusal to take action on climate change.”

The proposal is also seeking to update how the government calculates the damage caused by different greenhouse gases to the atmosphere, by aligning it with United Nations standards.

Finally, it proposes removing verification for some entities that have to report carbon pollution. Ontario’s environmental plan said it would set “emissions performance standards” for large polluters that don’t meet industry-specific targets.

The government is asking for feedback in its consultation in regards to three questions:

Editor's note: This story was updated on Feb. 9, 2019 at 8:30 p.m. with comments from Environment and Climate Change Canada.

Sometimes I wonder if Ford

Sometimes I wonder if Ford expects to be in power 12 years from now - and how he will answer to the questions that arise from his fumbling denial of climate change and his devastating failure to do every thing in the government's power to prevent disaster, and prepare for the outcomes. Both Federal and Provincial governments, even those that are somewhat pro-active on the environmental files are acting like drunkards, soused on their fossil fuel drug of choice, frantically fumbling around to secure their next fix.

It is probably too late for a twelve step program - nothing now will provide salvation except going cold turkey. The longer they delay, the deeper the pit they will have dug.

Mind you, this particular

Mind you, this particular thing isn't especially a Ford shenanigan. This is what Conservatives always do: Since they're wrong, to not seem that wrong they busily get rid of the evidence. Harper was always blocking science, ending research, throwing out libraries full of past research (OK, he only did that once), and generally avoiding the acquisition or retention of evidence related to his crimes--particularly environmental ones, but not only. Right wingers do it in the US as well, Conservatives do it in the UK, so it's no surprise Doug Ford is no different.

Please read below. Trudeau is

Please read below. Trudeau is no angel.

...and an interesting sidebar

...and an interesting sidebar out of the control of Premier Ford....enjoy.
Unpacking Canada’s Fossil Fuel Subsidies
Oil, gas and coal are multi-billion dollar businesses, yet every year fossil fuel companies get billions in tax breaks and handouts. In a world that’s shifting to cleaner sources of energy, those subsidies don’t make sense—especially when they work against the other actions we’re taking to fight climate change.
Prime Minister Justin Trudeau and his government have promised to stop subsidizing fossil fuels in Canada—that was a clear and specific promise in their election platform. But the federal government’s latest budget actually locked in some fossil fuel subsidies for another 10 years.
https://www.iisd.org/faq/unpacking-canadas-fossil-fuel-subsidies/

Revealed: oil giants pay billions less tax in Canada than abroad
Canada taxes its oil and gas companies at a fraction of the rate they are taxed abroad, including by countries ranked among the world’s most corrupt, according to an analysis of public data by the Guardian.
The low rate that oil companies pay in Canada represents billions of dollars in potential revenue lost, which an industry expert who looked at the data says is a worrying sign that the country may be “a kind of tax haven for our own companies.”
https://www.theguardian.com/environment/true-north/2017/oct/26/revealed-...

It may be worthwhile checking

It may be worthwhile checking on whether the Canadian report to the UN depends on some or a lot of reporting data supplied by the provinces.