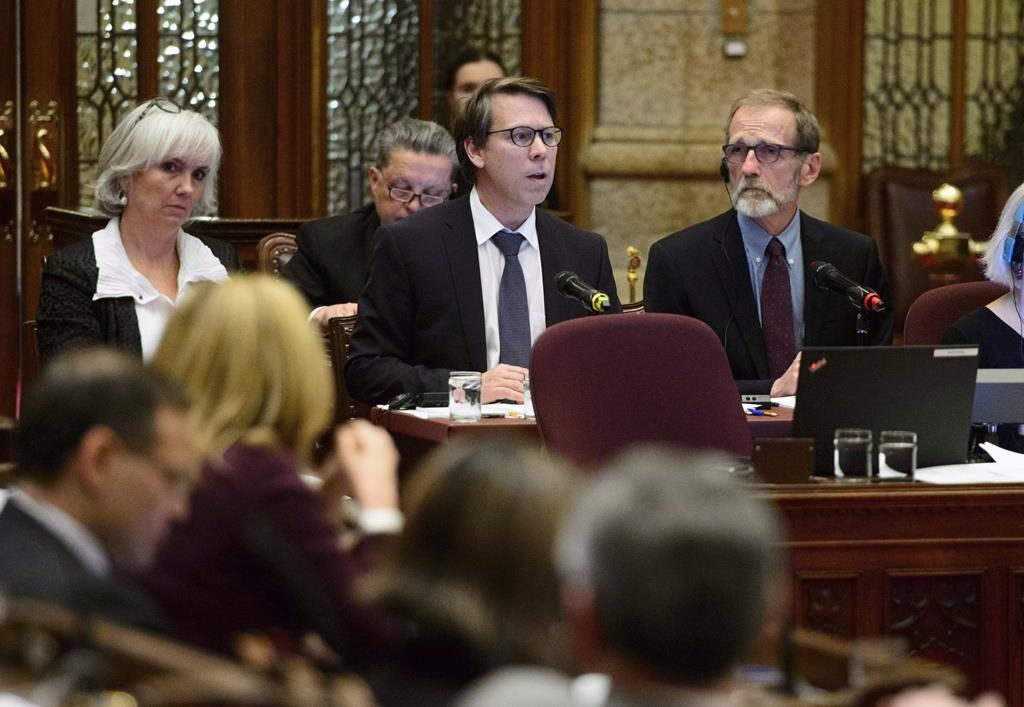 Stephane Perrault, Chief Electoral Officer of Canada, and Yves Cote, Commissioner of Canada Elections, appear as witness for a Committee of the Whole regarding Bill C-76 in the Senate on Parliament Hill on Nov. 6, 2018. File photo by The Canadian Press
Previous story
Next story

Canada's chief electoral officer says there's not much his independent agency can do to counter fake news circulated about a candidate in the midst of an election.

Stephane Perrault told a House of Commons committee Thursday there are some "minimal rules" that cover impersonation of parties, candidates or Elections Canada officials and some limited forms of disinformation.

But lies spread through social media can't be regulated by Elections Canada.

In an appearance Thursday before a House of Commons committee, Perrault refused to comment specifically on an ad that falsely suggests NDP Leader Jagmeet Singh, who is in the midst of a byelection contest in British Columbia's Burnaby South, owns an opulent mansion. But in general, he said there's no "silver bullet" to eliminate the dissemination of fake news.

The NDP has asked the commissioner of elections, Yves Cote, to investigate the mansion matter.

Cote's office would not comment Thursday on the NDP's complaint, other than to say "the allegations will be evaluated based on the case and a determination will be made as to how to proceed."

Omnibus legislation to modernize Canada's election laws, passed last December, includes a provision that makes it an offence to make false statements about a candidate for the purpose of influencing the outcome of an election. However, that provision applies quite narrowly to false statements about whether a candidate has broken the law or withdrawn from the election, as well as about a candidate's citizenship, place of birth, education, professional qualifications or membership in a group.

It does not appear to cover false statements about property ownership.

During testimony on the legislation last fall, Cote warned the provision was too limited and would exclude a whole range of false statements about a candidate’s character or beliefs, such as accusing someone of being racist or homophobic — allegations that “can be among the most serious and the most injurious” and which were previously prohibited.

“As these types of false statements appear to be resorted to more and more, as you very well know, in various electoral contests, this proposed amendment seems to me to be step in the wrong direction,” Cote told the Senate in November.

An ad claiming that Singh owns a $5.5-million mansion popped up recently in an online community newspaper, the Vancouver Courier, with a link to an article about "13 super luxurious celebrity houses" on the Attorney Cocktail website. Singh's face, which had been superimposed over a photo of one mansion, has since been deleted.

Singh has also been the target of another malicious online article, authored by the self-styled "NBCM News," (Native Born Canadian Movement), which falsely asserts the NDP leader is wanted for terrorism in more than 15 countries.

At committee on Thursday, New Democrat MP Nathan Cullen said lies have always been a feature of political campaigns. But he said the fake news attacks on Singh demonstrate the way in which lies have now been "weaponized" and "spread through Twitter and Facebook who themselves have no responsibilities under (the law) as far as we can tell to stop the lie." He lamented the inability of Elections Canada to do anything about it, except in very limited circumstances.

"And that's why precisely it's an all-of-government and an all-of-society response" that's needed, Perrault responded.

"There's no silver bullet to this. We can't have the Elections Act regulate all of social media content."

The Trudeau government has told social media giants that it "expects" them to be transparent and accountable for the content posted on their platforms. However, there is nothing in the law that compels them to take any action, other than to keep a public registry of all political ads disseminated through their platforms.