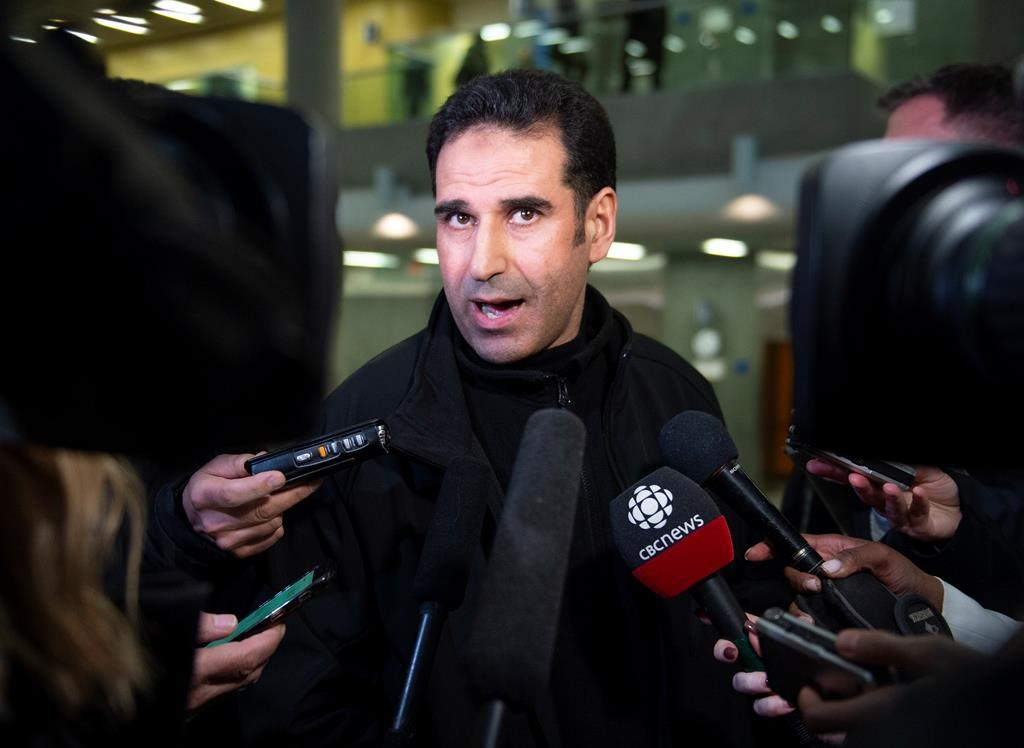 Ahmed Cheddadi, reacts to the 40-year sentence given by judge Francois Huot to Alexandre Bissonnette who pleaded guilty after killing six people in a mosque shooting in 2017, on Feb. 8, 2019 at the courthouse in Quebec City. Photo by The Canadian Press
Previous story
Next story

A Quebec judge's "unusual" decision to modify the Criminal Code as he sentenced six-time murderer Alexandre Bissonnette to a life sentence with no possibility of parole for 40 years highlights the ongoing legal debate over consecutive life sentences in Canada, according to legal experts.

On Friday, Quebec Superior Court Justice Francois Huot rejected the Crown's call to sentence Bissonnette to 150 years with no chance of parole, arguing a sentence of 50 years or more would constitute cruel and unusual punishment under the Canadian Charter of Rights and Freedoms.

Sentences that exceed an offender's life expectancy and offer no reasonable hope of release are "grossly disproportionate and totally incompatible with human dignity," he wrote in his 246-page decision.

But instead of sentencing Bissonnette to serve his six sentences concurrently, Huot rewrote the 2011 consecutive sentencing law, section 745.51 of the Criminal Code, to give himself the discretion to deliver consecutive life sentences that are not in blocks of 25 years, as had been the case. (First-degree murder carries an automatic sentence of life in prison with no possibility of parole before 25 years.)

In the end, Huot decided Bissonnette will serve at least 40 years in prison.

Bissonnette, 29, pleaded guilty last March to six counts of first-degree murder and six of attempted murder after he walked into the mosque at the Islamic Cultural Centre during evening prayers on Jan. 29, 2017 and opened fire.

Kent Roach, a law professor at the University of Toronto, described Huot's decision as "innovative."

"Charter challenges to the 2011 provisions had previously been denied on the basis that the judge was not forced to increase parole ineligibility for multiple murders," he wrote in an email.

"It may very well be appealed by both the Crown (who wanted far more than 40 years) and the defence, which may argue that if the judge thought the provision violated the Charter he should have imposed only 25 years of parole ineligibility."

But Renald Beaudry, a criminal lawyer who was at Bissonnette's sentencing, doesn't think the sentence would be easy to overturn.

He noted that Huot's lengthy decision included a comprehensive overview of worldwide jurisprudence on the issue of consecutive sentences, the philosophy behind the fundamental principles of Canadian law, and a summary of House of Commons debate on the issue.

"He really backed himself up, to use the expression," he said.

On Friday, lawyers for both the Crown and defence said they would study the decision before deciding whether to appeal the sentence. A spokesman for the Quebec Justice department also indicated its lawyers were studying the possibility of appeal.

Lisa Silver, a law professor at the University of Calgary, said the decision reflects the ongoing conversation in Canada surrounding the law that allows judges to "stack" life sentences for multiple murders instead of serving them concurrently.

"(The decision) does seem unusual, but it's also very consistent with what some judges are saying, not just about this section, but about sentencing and the larger discussion about these sections in the Criminal Code," she said.

The longest prison sentence in Canada to date is 75 years without parole, which has been given to at least five triple killers including Justin Bourque, who murdered three RCMP officers in a shooting spree in New Brunswick in 2014.

But other judges have rejected calls for consecutive sentences, including the Toronto judge who on Friday sentenced Bruce McArthur to life in prison with no parole for 25 years for murdering eight men with ties to Toronto’s gay village.

Silver said the difference in sentences can be problematic because it leads to comparisons, such as the perception that a gay or Muslim person's murder isn't "worth" as much as that of an RCMP officer.

But she said people should understand that a sentence isn't about putting a numerical value on a person's life.

"We need to remember that sentencing is individual, it takes in a number of factors, and those include the circumstances of the crime, the severity, the impact on the community, but it also has to reference the circumstances and background of the offender," she said.

Silver agreed that the Bissonnette sentencing is also likely to be appealed, and she believes that's a good thing.

She said she believes the consecutive sentencing law needs to be reviewed in order to provide more guidance for judges and avoid the harm caused by the perception of inconsistent sentencing.

"The difficulty in the street level is, these are communities that need to have some closure," she said. "And when you have appeals and decisions that, in a public view don't seem consistent, it's difficult for people to move on with their lives."