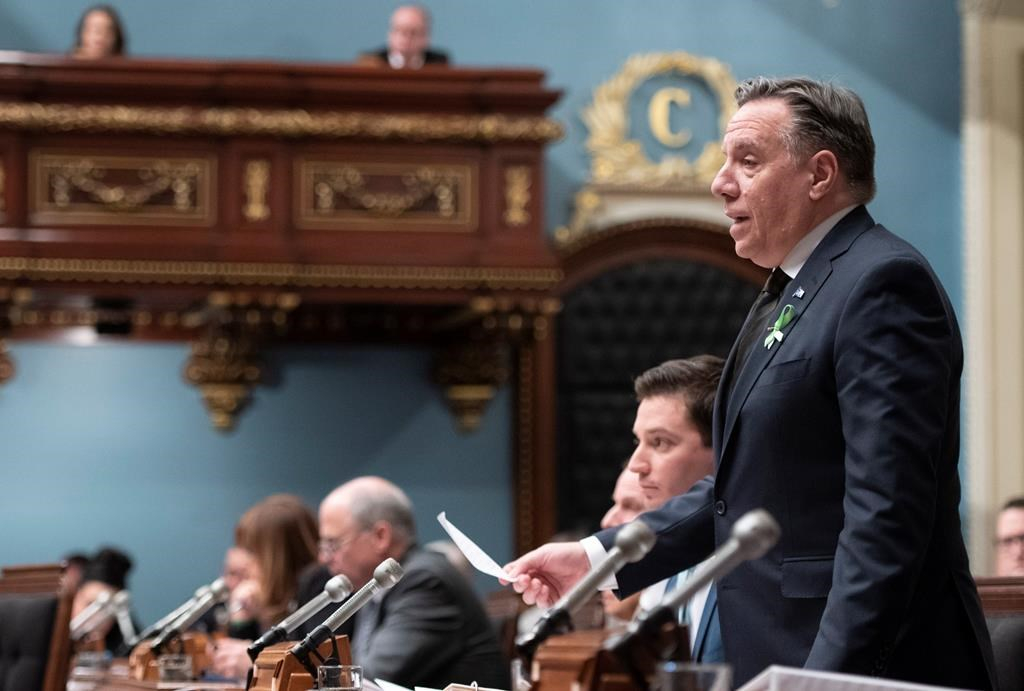 Quebec Premier Francois Legault responds to the Opposition during question period, on Tuesday, February 12, 2019 at the legislature in Quebec City. Photo by The Canadian Press/Jacques Boissinot
Previous story
Next story

Quebec Premier Francois Legault says he wants the federal government to settle with engineering firm SNC-Lavalin "as soon as possible" in order to protect jobs and the company's corporate headquarters in Montreal.

The embattled firm is vulnerable to a foreign takeover, Legault told reporters Thursday in Quebec City. And the longer its legal troubles drag on, the greater the chance it could fall prey to another company, he said.

"I want to do all we can do to protect this headquarters and protect the thousands of good, well-paying jobs we have at SNC-Lavalin."

The company has been lobbying the federal government for a remediation agreement to avoid a criminal trial on charges of bribery and fraud related to its efforts to secure government contracts in Libya.

Under a remediation agreement the prosecution would be dropped in exchange for SNC-Lavalin admitting its wrongdoing and paying a financial penalty. The Globe and Mail newspaper reported last week that the Prime Minister's Office pressured former attorney general Jody Wilson-Raybould to agree to such an agreement.

Legault said SNC should pay for its alleged crimes, but its employees and the province's economy shouldn't suffer as a result.

"We know that SNC-Lavalin, that they didn't follow legal rules — in Libya especially — and they have to pay for that, especially the people that were involved," he said. "SNC-Lavalin, I met the president, they are ready to put on the table very large amounts of penalty."

Without a settlement, he added, the case could drag on for years and SNC-Lavalin's business would suffer.

SNC-Lavalin had its debt rating downgraded Wednesday by Standard & Poor's. The agency cited the criminal charges against the engineering and construction giant and the 10-year ban from bidding on federal contracts that would accompany a conviction among its reasons for the downgrade.

Legault said the firm's legal woes are bad for the province. "Right now there is no controlling shareholder, so there's a real risk that this company could be bought by somebody, for example from the U.K. For me, it would be bad news for Quebec," he said.

He said that in discussions with Prime Minister Justin Trudeau he has asked, "Can you settle as soon as possible in order that we keep those jobs? We need those jobs."

Added to the company's troubles is news this week that Quebec prosecutors are working with the RCMP on the possibility of new criminal charges against SNC-Lavalin, in connection with a contract to refurbish Montreal’s Jacques Cartier Bridge.

While Legault had plenty to say about the federal charges, he stayed away from commenting on the provincial allegations. "I have no intention of doing (anything) with what's happening in Quebec jurisdiction," he said.

Certainly, Premier Legault is making a persuasive argument for protecting SNC-Lavalin from prosecution. Few Canadians want to see the company broken up, its assets stripped and moved off shore (though that is probably where a lot of its profits are parked)... His arguments probably fairly represent the "pressures" downloaded to Ms. Wilson-Raybould in her capacity as Minster of Justice, in charge of the legal pursuit. Who did the downloading is still to be determined and if not the PMO, then Liberal stalling on getting to the bottom of this will trail them like a nasty stink throughout the next election cycle.

There is ample precedent - especially in the U.S., for erring and criminal corporate actions to be paid for in punitive fines. The results have not always been helpful as the corporations seem to bounce back and continue to operate, teetering on the fine line between probity and malfeasance. Just how much of that Canada wants to tolerate is an open debate.

Is SNC too big to fail - as the premier believes, and as many Liberals no doubt agree?

There is an argument that some corporations are too big to operate with efficiency or, probity. When sheer size makes the mechanisms of command and control impossible to monitor, and the various tentacles are able to maneuver/manipulate semi-independently, the body of the whole is under attack from within and may well be ripe for an outside takeover. SNC could already be in this stage of disintegration.

The federal government, if considering a settlement, should also consider ways to enforce remediation, not just in financial terms but in terms of the health of the corporate body. It rarely happens in Canada but the U.S. Government - acting under anti-trust legislation has, not infrequently, forced corporations to split up, to "restructure", to let some light and competition into the sector they dominate.
Too big to fail is a perilous position for both corporations and for governments.