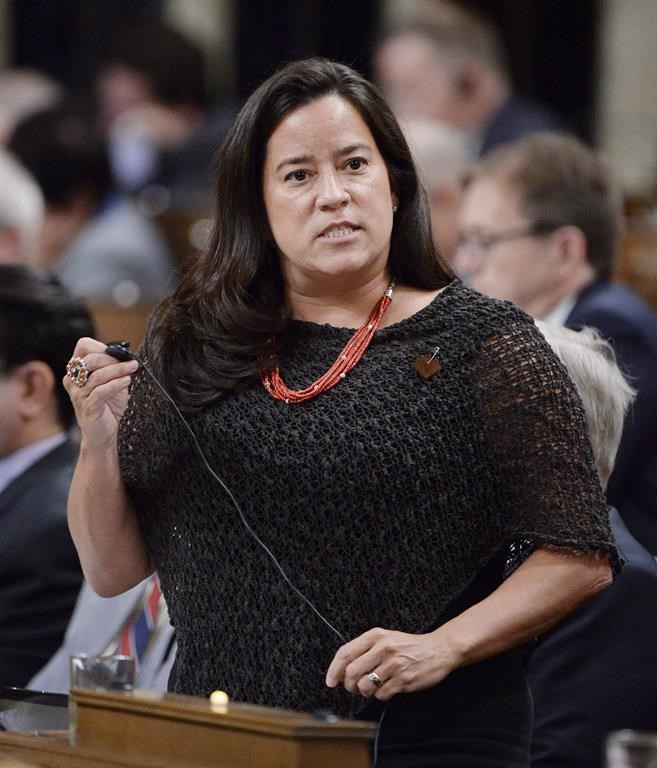 Justice Minister Jody Wilson-Raybould speaks during question period in the House of Commons on Parliament Hill in Ottawa on Thursday, Oct. 18, 2018. File photo by The Canadian Press/Adrian Wyld
Previous story
Next story

But they say her departure is a sign of how much work there is still to do.

"Even though some will see this as a threat to the promise and process of reconciliation, it is not," eight Indigenous senators said in a written statement issued Thursday.

"It is a measure of the distance they have yet to go and the challenges we have yet to overcome. As long as Ms. Wilson-Raybould and other men and women like her gain and remain on the national scene and show the integrity we need to persevere on this journey, change will occur."

The statement was drafted by independent Sen. Murray Sinclair, a former judge who led the Truth and Reconciliation Commission that examined the history of residential schools in Canada. It was signed by him and seven other Indigenous senators.

"I think Jody resigning from cabinet is a huge loss ... for Indigenous communities right across the country," said Don Rusnak, who represents the Ontario riding of Thunder Bay-Rainy River and was the inaugural chair of the Liberals' Indigenous caucus.

That said, Rusnak argued that no one person speaks for Indigenous communities, each of which is unique.

"I think, I know that the prime minister is sincere in what he is trying to do and the work will continue."

Wilson-Raybould resigned from cabinet Tuesday amid a furor over an allegation that the Prime Minister's Office improperly pressured her last fall to help Montreal engineering giant SNC-Lavalin avoid criminal prosecution on corruption and bribery charges related to government contracts in Libya. Wilson-Raybould was justice minister and attorney general at the time but was demoted to veterans affairs in a January cabinet shuffle.

The move wasn't explained at the time. On Thursday, Montreal Liberal MP Anthony Housefather speculated in a radio interview that Trudeau might have wanted a justice minister who spoke better French because "there's a lot of legal issues coming up in Quebec."

Housefather chairs the House of Commons justice committee, which voted on Wednesday to take up an examination of Wilson-Raybould's departure, though a much more limited one than opposition members want.

Wilson-Raybould made history when she became the first Indigenous justice minister back in 2015. She became a powerful symbol of Prime Minister Justin Trudeau's assertion that there was no relationship more important to him than that with Indigenous Peoples.

Some Indigenous leaders across the country have excoriated Trudeau for what they perceive as his shoddy treatment of Wilson-Raybould, which they assert proves his reconciliation agenda is a farce.

But the Indigenous senators' statement is much more circumspect, praising Wilson-Raybould for her "courage and leadership" while not taking sides in the dispute between the former minister and Trudeau.

Trudeau has said no one in his office improperly pressured Wilson-Raybould to instruct the director of public prosecutions to negotiate a form of plea bargain with SNC-Lavalin, rather than pursue a prosecution that could wind up bankrupting the company. If Wilson-Raybould had felt pressured, he has said, she should have raised her concerns with him.

Wilson-Raybould has so far given no reason for her resignation. She has cited solicitor-client privilege in refusing to comment on the allegation, levelled by anonymous sources in a Globe and Mail story last week. She has now hired a former Supreme Court justice, Thomas Cromwell, to advise her on what she may legally say.

The senators used their statement to commend Wilson-Raybould for her accomplishments as justice minister, praising her "personal strength of character, integrity and dedication to modernize the justice system and work towards reconciliation."

Trudeau and his office have taken pains since Wilson-Raybould's departure to try to soothe the nerves of rattled Liberal backbenchers. Trudeau spoke to his MPs Tuesday evening by teleconference.

According to MPs on the call, the prime minister assured them that there had been no wrongdoing. He acknowledged that there had been internal discussions about whether to intervene to halt the prosecution of SNC-Lavalin but said that was normal given the importance of the company and thousands of jobs at stake.

Trudeau took no questions from MPs but, since then, staff in charge of the various regional desks in the PMO have been calling backbenchers to answer questions. Trudeau's principal secretary, Gerald Butts, has also been calling MPs.

Privately, some Liberal backbenchers wonder how much longer Wilson-Raybould can continue to be a member of the Liberal caucus, given that she has apparently set herself at odds with the prime minister in what has become a huge political firestorm for the government in an election year.

For his part, Rusnak said he has "no idea" whether she can remain in caucus.