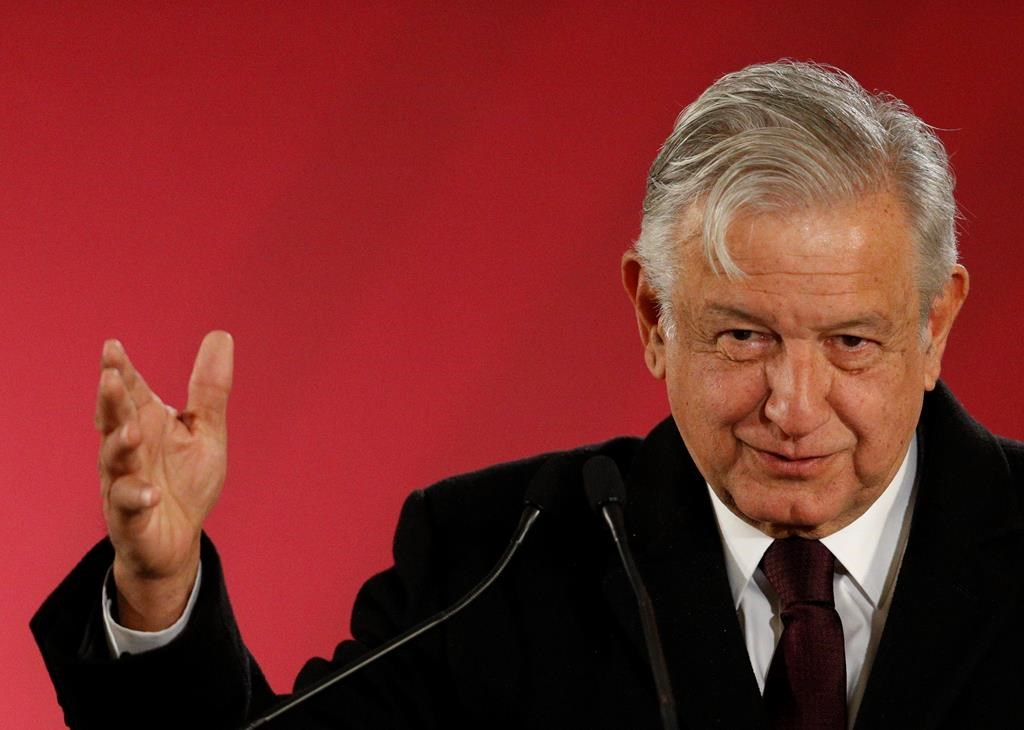 Mexican President Andres Manuel Lopez Obrador announced a $3.9 billion bailout for the country's cash-strapped, state-owned oil company Friday and promised it an additional $1.6 billion in revenue, making it a rescue package of up to $5.5 billion.

Lopez Obrador has made rescuing Petroleos Mexicanos, or Pemex, a centerpiece of his first 100 days in office, launching an offensive against fuel theft gangs that drill illegal taps into Pemex pipelines. The extra revenue is expected to come from increased sales for the company as sources of stolen fuel dry up.

The government package includes assuming pension debt, injecting cash and cutting taxes for the company. But the assistance plan is tiny in comparison to the staggering $43.8 billion in debt the company has incurred since 2013.

Lopez Obrador sees the company, which was nationalized in 1938 by his hero, ex-President Lazaro Cardenas, as a national symbol and engine for the economy.

"In Pemex there has been bad management and a lot of corruption, looting," Lopez Obrador said in announcing the plan. "If we end the corruption, Pemex will be reborn and that will apply to the country, as well."

In January, the Fitch ratings agency lowered the company's credit rating one step to "AA," with a negative outlook. It says Pemex is essentially insolvent, with negative cash flow and a debt exceeding the value of proven oil reserves.

On Friday, Fitch said the bailout "would likely not be enough to prevent continued deterioration in company's credit quality."

"The announced support measures are less than the $12 billion to $17 billion of additional annual cash requirements Fitch estimates Pemex needs to halt production and reserve level declines," the company said.

Mexico City-based oil analyst and consultant David Shield said: "They don't have the policies in place to turn around Pemex, but at least they're doing something."

To regain its position as a viable business, Pemex needs to invest more in exploration and production even though it has limited funds.

"Somebody will have to bring it (money) in and that somebody will probably be private," Shields said.

But he has been highly critical of oil and gas concessionary contracts granted under the energy reform of former President Enrique Pena Nieto, saying that private companies have been slow to make promised investments or produce much oil.

The president has also stressed the importance of investing government money in doing things like building refineries to reduce Mexico's dependence on imported gasoline, although those plans involve huge investments that don't immediately boost the company's output.

Lopez Obrador has also not shown a willingness to take on the oil workers' union, which has kept Pemex payrolls swelled with more workers than needed, siphoned off money and saddled the company with huge liabilities.

"I think there is still a battle to be fought there," said Shields. "I think the union issues may be coming to a head in the short term."

A dissident group formed earlier this month to try to organize a new union at the oil company.

Many pro-market critics in Mexico question the wisdom of sinking so much government money into the cumbersome giant.

"They are now saying it can't be done, that Pemex's debt is too big, that it is going to be impossible to rescue Pemex," said Lopez Obrador. "I accept the challenge. We are going to get Pemex back on its feet and it is going to be a productive company, a profitable one."

A rise in oil prices could help him prove the critics wrong. "If oil prices rebound, he may look like a genius," Shields said.

US 'might' lift tariffs once new trade deal is signed: incoming Mexican minister