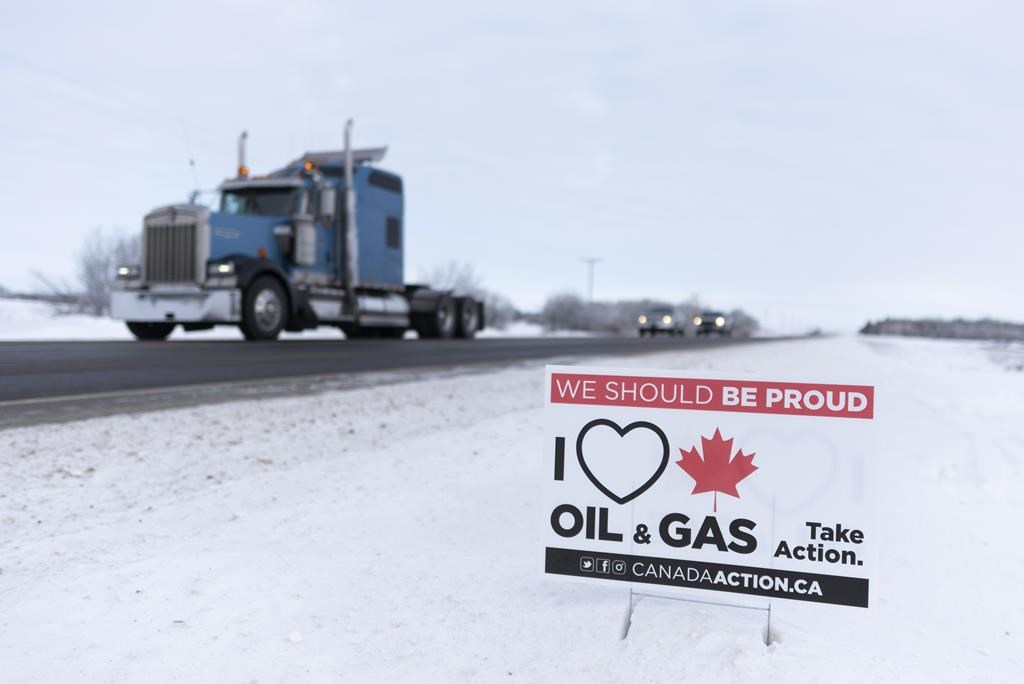 A truck arrives to a pro-pipeline rally at IJACK Technologies Inc. near Moosomin, Sask., on Saturday, February 16, 2019. Photo by The Canadian Press/Michael Bell
Previous story
Next story

The premiers of Saskatchewan and New Brunswick joined Conservative leader Andrew Scheer on a panel at a rally in rural Saskatchewan on Saturday that was held to draw attention to legislation that would overhaul how major energy projects are assessed.

"We have a very thorough process that does work. What we need is a federal government that supports our resource industries across this nation," Moe told a crowd of hundreds in southeastern Saskatchewan.

"Unfortunately what we have is a federal government that is pressing forward with Bill C-69."

Scheer vowed that if elected in October, he would repeal C-69 if it passed, but his government's first job would be to scrap the carbon tax.

He said he will spend from now until the federal election fighting against Trudeau's energy policies.

"We want Justin Trudeau to get out of the way."

Rally organizer Sinclair Harrison said before the event that he hoped the rally would encourage TransCanada Corp. to reapply to build Energy East, a pipeline that would have transported oil from Alberta and Saskatchewan to New Brunswick and Quebec.

Energy East would have featured a tank terminal in Moosomin, Sask., near where the rally took place. There were also plans for additional pipelines to be built further south.

Harrison said the area already sees tax revenue coming from the existing TransCanada mainline and is reaping the benefits from construction taking place on another nearby pipeline.

"We're here to speak for the silent majority that are in favour of pipelines," said Harrison.

"The more pipelines, the better off we are."

Afterwards, Moe said he is willing to work to improve C-69 and has submitted suggestions as part of the consultation process to the federal government.

He also said he is talking to different premiers, including Higgs, about developing more energy corridors throughout Canada.

Saturday's crowd also heard from local business and municipal leaders who spoke about the importance of pipelines to the sustainability of rural communities and the construction industry, as well as safety.

An undetermined amount of oil leaked, CN said, but it was later contained and there were no reports of injuries or a fire.

Marlene Spear from Langenburg, Sask., who's husband works in oil and gas and whose son-in-law was at the derailment, attended the rally and believes more pipelines are needed because it is safer than moving oil by rail.

"Travelling the oil and gas across our country by train is not necessarily any safer than travelling it though a pipeline," Spear said.

Marc Porter, from Wawota, Sask., was also at the rally, and said times are tough.

"This is the first year that I've ever applied for unemployment insurance, probably since I was a kid, so it hasn't been that great."

Saturday's rally comes as a truck convoy that started in Red Deer, Alta., is making its way to Ottawa as part of a protest in support of the energy sector.