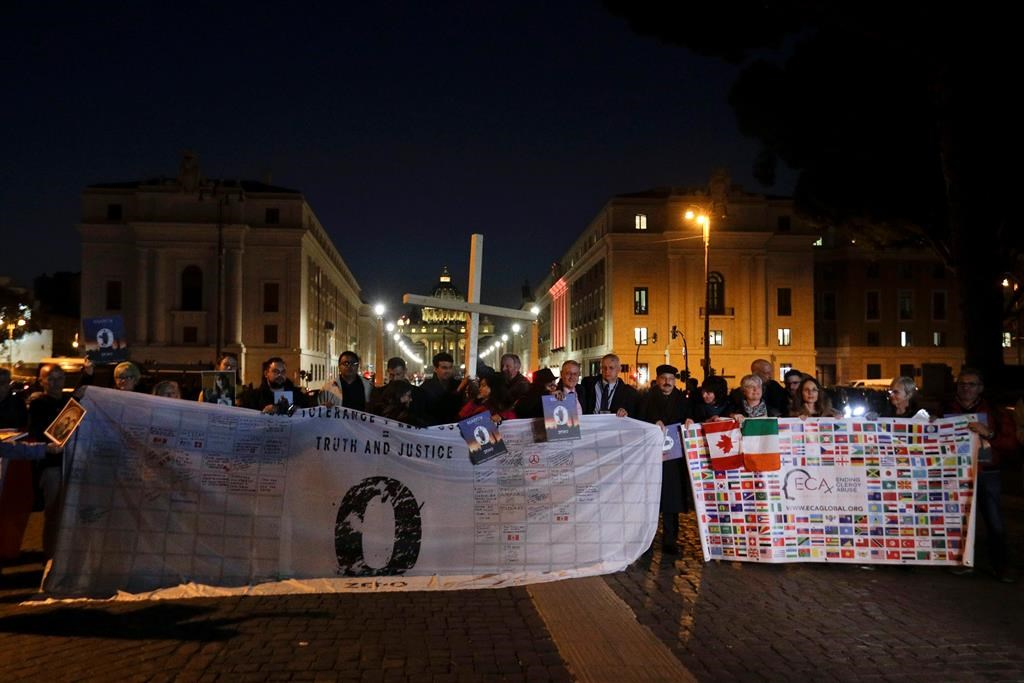 Survivors of sex abuse hold a cross as they gather in front of Via della Conciliazione, the road leading to St. Peter's Square, during a twilight vigil prayer of the victims of sex abuse, in Rome, on Feb. 21, 2019. Photo by The Associated Press
Previous story
Next story

One by one, a dozen survivors shared their shattering tales of sexual abuse at the hands of Catholic clergy with high-ranking church officials gathered to listen to the stories they'd declined to hear for years.

Leona Huggins, the only Canadian in the gathering that took place ahead of a historic summit at the Vatican this week, said the energy built "like a tsunami" as victims hailing from Spain to Jamaica urged clergy to take concrete action to begin a new chapter for the church.

But she said the tide ebbed quickly as soon as the harrowing accounts were presented.

Huggins said one archbishop reacted by saying "I guess we'll have to get to work," prompting her to ask why such work had not already begun. That question was answered with a demand to be respectful, she said, eroding hope that this week's summit meant to tackle sexual abuse in clerical ranks would result in true change.

"We were truth-tellers in that room," the Vancouver-based school teacher said in a telephone interview from Rome. "It's really hard for me to think how anyone could hear those stories and not take courageous action."

Huggins, 56, had limited hopes for the international meeting, called by Pope Francis in a bid to quell a scandal that has dogged his tenure as head of the Catholic Church.

The pontiff himself was not at the gathering of survivors held a day before the official summit got underway Thursday, a point that did not sit well with those who shared their stories.

Huggins, who has gone public with her story of abuse, said her experience played out like so many others. She said she was groomed and ultimately abused by a Catholic priest who worked in her British Columbia parish in the early 1970s.

He was ultimately convicted in 1991 of sexual offences against two women, including Huggins, but continued working as a priest in communities ranging from Lethbridge, Alta., to Ottawa until his death in 2018.

Huggins, who used some of her time at the closed-door gathering to call for recognition of Canadian Indigenous victims of abuse, said the Pope's presence would have been an important sign that the church was serious about addressing past wrongs and preventing new ones from unfolding.

Pope Francis expressed many high-minded intentions at the summit's official opening on Thursday, acknowledging the need for concrete action and significant, internal change.

"Listen to the cry of the young, who want justice," he told the gathering. "The holy people of God are watching and expect not just simple and obvious condemnations, but efficient and concrete measures to be established."

People from five continents shared their stories of abuse, including an unnamed woman from Africa who told the gathering of the three abortions her former priest forced her to have during the decades in which he raped her.

The Pope, for his part, handed out a list of 21 proposals for the church to consider, including specific protocols to handle accusations against bishops.

One idea called for raising the minimum age for marriage to 16 while another suggested a basic handbook showing bishops how to investigate cases.

But for Huggins, the specifics of the 21 points did even more than Wednesday's gathering to chip away at what little optimism remains, lamenting the newly raised minimum age is still wildly out of step with societal norms and criticizing the church for not having a handbook in circulation long ago.

Huggins said she feels she still has to "hold out hope" that leaders will make good on their promises of reform. If they don't, she said, she fears an entirely new generation would be at risk.

"I don't see how anyone can continue to bring their child to a church that will not promise their child's safety," she said.

— with Files from the Associated Press.

The Vatican 'owes God an apology,' activist says in letter to Pope Francis

A brain-jolting failure of Catholic hierarchy to reasonably address the attacks on vulnerable people upon whom their underlings preyed. Women are not good enough to be Catholic spiritual leaders- wrong sexual organs- but they are good enough to be sexual victims of those who are. Amen.