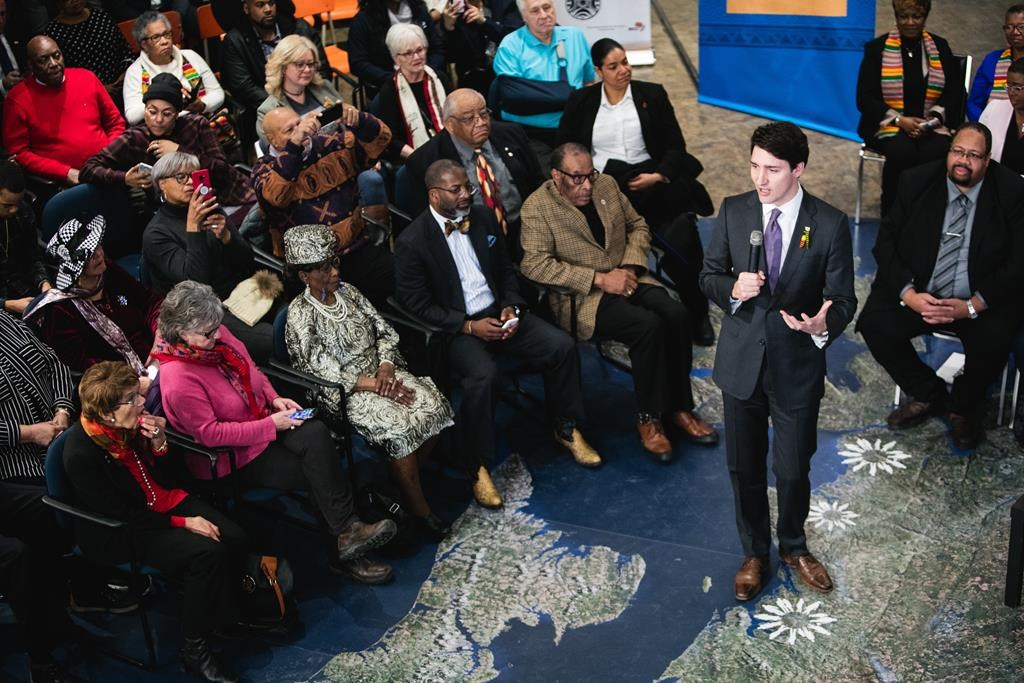 Prime Minister Justin Trudeau speaks during a media availability at the Black Cultural Centre For Nova Scotia in Dartmouth N.S., on Thursday, Feb. 21, 2019. Photo by The Canadian Press/Riley Smith
Previous story
Next story

Justin Trudeau told an audience of African Nova Scotians on Thursday that an incident of apparent racial profiling on Parliament Hill shows that racism, unconscious bias and systemic discrimination still can emerge anywhere in Canada.

The prime minister was referring to an incident this month during a lobbying event called Black Voices on the Hill, where several young participants have said they were referred to as "dark-skinned people" and asked to leave a parliamentary cafeteria by a security guard.

"A group of young people ... faced discrimination and marginalization," Trudeau said during an event at the Black Cultural Centre for Nova Scotia in Cherry Brook, a suburb of Halifax with a large African Nova Scotian population.

"They faced a stark reminder that even in that one place that should be theirs ... that anti-black racism exists, that unconscious bias exists, that systemic discrimination exists in this country today."

Trayvone Clayton, a Halifax student who said he was racially profiled, met with Trudeau ahead of the event to discuss the incident.

"We all had our say," he told reporters of the 30-minute meeting with the prime minister. "We respect his apology."

Clayton, in his second year at Saint Mary's University, said he was "very hurt" by the incident.

"We should be accepted for who we are, and what we do. We should not be turned down just because of our skin colour."

The Federation of Black Canadians said several participants in a Feb. 4 event in Ottawa were asked to wait in the parliamentary cafeteria ahead of meetings with cabinet ministers.

The federation said a security guard referred to their skin colour and requested their departure, despite rules that allow civilians with the appropriate passes to be in the area.

The Parliamentary Protective Service apologized at the time of the incident and has said the force was investigating.

In the House of Commons on Tuesday, Speaker Geoff Regan called the service's apology a welcome first step, but said it shouldn't be seen as closing the issue or as a way to erase the unacceptable reality of what occurred.

Meanwhile, Trudeau told a large audience on Thursday that it was particularly worrying that such an incident would occur during African Heritage Month in a public building that belongs to all Canadians.

"We still have a country where discrimination based on the colour of a person's skin is all too common," he said. "We have much, much work to do."

Trudeau — the first sitting prime minister to visit the black cultural centre — praised its role in preserving the history of the province's black residents.

Trudeau also noted his pride that Ottawa has introduced a $10 bill with a vertical portrait of Nova Scotia civil rights advocate Viola Desmond.

Desmond was arrested after refusing to leave a whites-only section of a theatre in New Glasgow, N.S., in 1946.

"Canadians can see and know a part of our history that Canadians haven't seen and recognized," he said, adding that unfortunately the discrimination Desmond faced hasn't disappeared and incidents continue too frequently in current times.

Earlier in the day, Trudeau was at another location on the outskirts of Halifax, announcing up to $86.5-million to improve an expressway into Halifax, predicting the work will make commutes safer and swifter.

He said the federal money would help extend the Highway 107 Burnside Connector and build a high-speed bypass to connect Highways 101, 102, and 118.

"We know that families are going to get to work and back home quicker because of this investment," the prime minister said.

"We know that moving forward on something that's been talked about for so many decades ... is something that a lot of families around here have been waiting for."

The federal money from the Building Canada Fund is in addition to $107-million announced by the province. Halifax Regional Municipality said Thursday it is funding only an interchange in Burnside.

"Meanwhile, Trudeau told a large audience on Thursday that it was particularly worrying that such an incident would occur during African Heritage Month in a public building that belongs to all Canadians."
"We still have a country where discrimination based on the colour of a person's skin is all too common," he said. "We have much, much work to do."
Mr. Trudeau's specialty? Overstating the ills of Canada and portraying himself as everyone's saviour. His virtue signalling knows no bounds.