Did I get booed by the People's Party of Canada?

The packed room erupted into applause when I introduced the by-election candidates. It was standing room only. Friends of Canadian Broadcasting had brought the four parties together on the topic: 'Can Canada survive Facebook?' But it didn't feel like that was the top thing on people's minds that night in early February.

Looking out from the podium, I saw a sea of Canadians showing up for a by-election and making their voices heard. Moments before, I'd met the four candidates in a private room at the Delta Hotel and Casino where they all sat around a banquet table nursing glasses of water as they waited for the event to begin. They greeted each other graciously. Laura-Lynn Tyler Thompson is the candidate for the People's Party of Canada, a far-right populist party led by Maxime Bernier. Jagmeet Singh is the leader of the NDP contending with Conservative Jay Shin and Liberal Richard Lee. Jagmeet Singh was the last to come in and when I said hello, he corrected my pronunciation of his name — it's pronounced "Jug-meet," he told me.

This is Canada, I thought as I observed them, thinking, of course, of the mania and polarization south of the border — stuff some of my Canadian friends tell me just can't happen here. I felt privileged to be shaking hands with the first person of colour to lead a federal party, the savvy, highly educated Conservative candidate, the seasoned Liberal candidate, and the People's Party of Canada candidate who smiled warmly as she said hello. It all felt very civil.

And so, I started the evening as moderator of the Burnaby South all-candidate's debate with an observation. "It's so great to see democracy in action!" I meant it: I love grassroots politics. I grew up working in political campaigns that brought all kinds of people from different backgrounds and values together to work for one person, one goal. I respond to the headiness of elections, the hope and potential they bring to make a better world. That better world that never seems to come, but always might this time be in reach.

Anyway, since I moved to Canada in 2001, I often insert somewhere in speeches, a little self-deprecating joke. I haven't ever been able to kick my distinct Southern accent. I figure my Tennessee twang confuses people when I am being introduced as the founder and editor in chief of Canada’s National Observer so I say, 'you may notice from my accent that I'm not a native Canadian. And since moving here in 2001, I've been learning how to be a Canadian. Learning to apologize.' Then, I apologize for something very American that I really don’t like. In the early days of being here, I apologized for George W. Bush. Then came Obama and the joke no longer worked for me. Then came Trump.

The room erupted. Some booed at the name "Trump" (NDP, Liberals, Conservatives?), but many more were booing at the fact that I was joking about Trump (People's Party of Canada?). Loudly. Very loudly. A big wave of boos.

So much that I burst out laughing. Hey, I've never been booed!

And this crowd was going for it.

Standing on the stage it was like a wave coming at me.


"Well, this is going to be an interactive evening," I said.

I wish I could have taken notes on the policies and positions the candidates discussed. I remember being impressed by the reflective responses of Singh, Lee and Shin. I remember thinking Laura-Lynn Tyler Thompson's answers were sometimes shocking, sometimes down to earth. At moments, she sounded a lot like Donald Trump, to her supporters' delight and cheers. She was true to her self-description: "Tired of political correctness! Freedom is our greatest gift. TV host, author, speaker. Stand with courage or sink with cowardice." Why am I talking more about her than the other candidates? Because she was colourful and creative. Following prepared notes, she surprised, deconstructed, and seemed determined to undermine the status quo. The other candidates provided a calm foil that absorbed the shocks, while she kept the fire burning in her supporters.

She made all the other candidates look extremely moderate. Jagmeet Singh held his own very well, never losing his cool, as the waves of populism surged and subsided through the night. The other candidates kept their cool admirably.

It was my first live experience with the People's Party's brand of populism, and I'm guessing we will see the same scenario replay in riding after riding across Canada. Last night, the final all-candidates debate took place in Burnaby South, and tensions apparently continued to climb. I wasn’t there, but according to Burnaby Now’s excellent report, audience members yelled insults at candidates and each other, yelling 'Shame on you!' over immigration and security. NDP leader Jagmeet Singh and PPC candidate Laura-Lynn Tyler Thompson clashed on immigration, with Thompson bringing up the 2017 murder of a 13-year-old girl by a Syrian refugee, while Singh denounced "coded language" used to smear minorities. A Liberal supporter stood up from the crowd and heatedly accused Thompson of racism, sparking a shouting match with other audience members. Some of NDP leader Jagmeet Singh’s answers were cut off by aggressive jeers from the crowd, Kelvin Gawley reported. The riding has a diverse population, but the debate showed intense polarization among people from all political stripes.

The polarization and heated rhetoric from Burnaby South offers a striking warning for Canada. Canada's top civil servant commented that he fears "someone is going to be shot" during the upcoming federal election campaign. Privy Council clerk Michael Wernick lamented the "vomitorium of social media" and worried that the reputations of honourable people who have served their country were "being besmirched and dragged through the market square." Across Canada, nonetheless, candidates are preparing to enter this treacherous arena. At stake is which party will set the tone for Canadian values for the next 4 years.

Get ready for it. The election is coming to a riding near you. 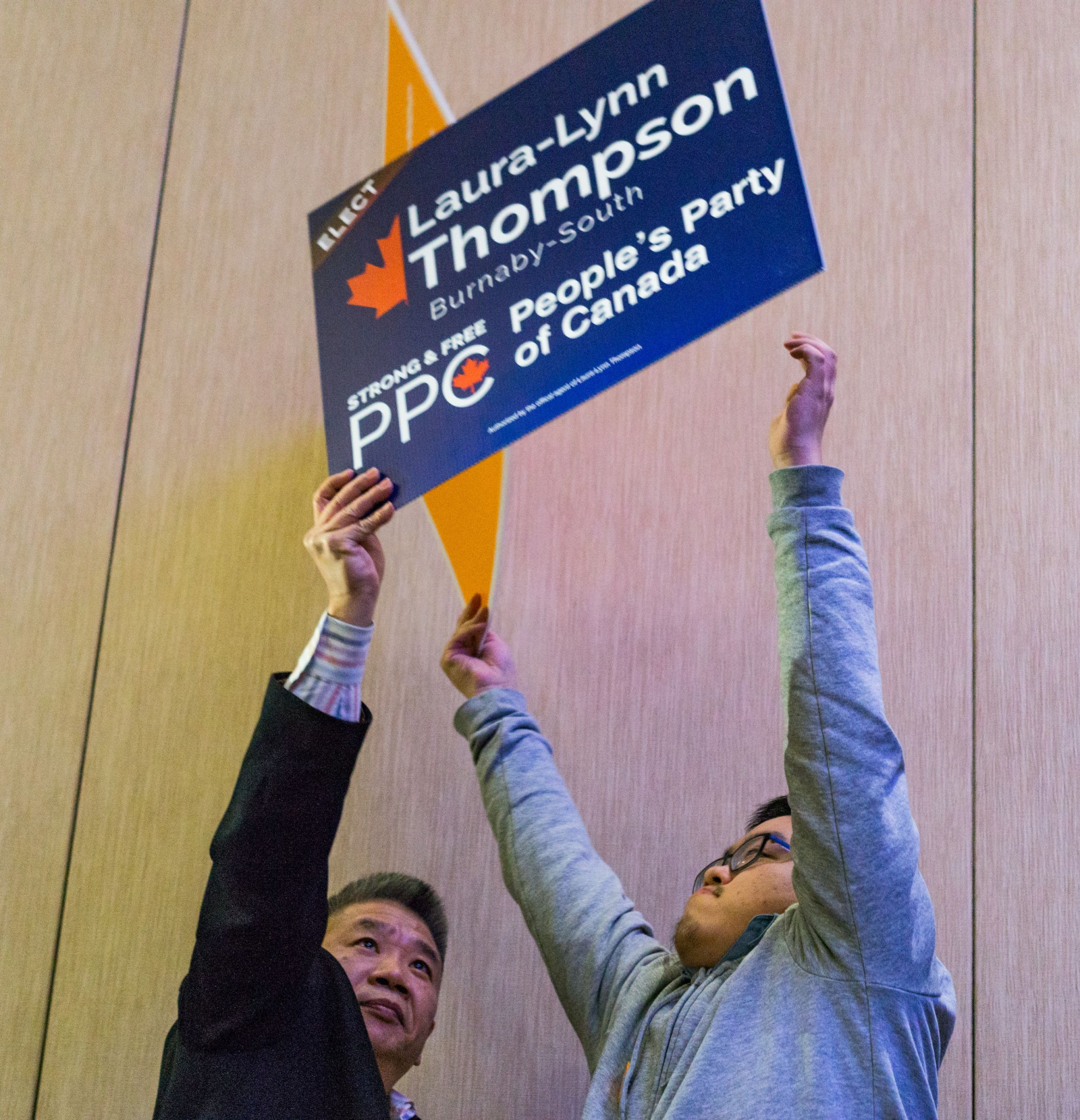 People's Party of Canada supporter and NDP supporter jostle to get their signs best visibility.

2019 will be the year of the climate reporter

Good time to be old.

Good time to be old.

I think I know what you mean,

I think I know what you mean, but if you could elaborate, that would be really interesting, Dana.

Friends of Canadian Broadcasting organized this event hoping to get exposure for the important issue of tax fairness in Canadian tax law particularly with respect to the FANG group of corporations (Facebook, Amazon, Netflix, Google). These internet-based corporations aren't taxed by Canada for the business they conduct with Canadian citizens and companies. The case of advertising revenue is most often cited as an obvious problem since it absorbs so much of Canadian media dollars spent on advertising. Another important issue with the FANGs is 'fake news' and political interference that is at the centre of debate in US politics and soon to be our problem in the coming federal election. What Linda saw in Burnaby is an example of what will become more frequent in Canadian politics. We see this with the Alberta protests particularly the truck thing in Ottawa. We need independent and high-quality information in the News industry. National Observer provides this as would a properly funded CBC. Somehow that message got highjacked in Burnaby that night.

Hi Graham, Thanks for adding

Hi Graham, Thanks for adding this comment. You provide some really important context for why the event was taking place and you rightly say that the key reason for the event got lost for the most part in the theatre of politics. I really appreciate your view of National Observer and, think CBC is fundamental to giving Canadians a shared sense of truth and facts, but that it can't do this alone. We live in interesting times.

We need more of the National

We need more of the National Observer and we truly cannot do without CBC. I have never before heard anything referring to CBC not being properly funded, have actually heard the opposite. Would this be something the Nat. Obs. could look into?
I have been shocked at how fast we are gaining bigots and racists and guns in Canada. A year ago I would not have believed what I am hearing somewhere every day now.

Thank you so much for your thoughtful comments about the National Observer and the need for fact-based journalism, Sherry.

Yes, I am worried about the

Yes, I am worried about the impact of 'Trumpism" on our country. It is very frightening.

The rhetoric and divisiveness

The rhetoric and divisiveness is simply fear. The Peoples party is a response, to fear of european settlers(myself included in that group) that the white world is shrinking.
It is! And that is a wonderful thing. I would welcome a more diverse group of neighbors, Syrian, Sengelese, Muslim, Buddhist or any other. We cannot consume from the world without welcoming all of it.

"And that is a wonderful

Great comment, JSmith; however, you still live in Canada, I presume, and not the USA. And, neighbours is spelt as such.

Beware of the bullying

Beware of the bullying instinct within that makes us cover up our fears with the fleeting feeling that we must win. At any cost. Booing is the bully's response to dialogue and to democracy.

Sounds like the Roman Forum - Did the lions and tigers win? Did the rabble rousing People's Party mob vote with thumbs down? How much do you bet that facebook followers have no idea where those thumbs came from? or that they signaled life or death? "Lock her up" indeed!

I AM old, and after a lifetime of silence now feel free to let loose my opinions - so yes, it is a good time to be old - lots of room for speaking out!

If age gives one permission

If age gives one permission to speak and the respect having lived a long time on this earth should command, then I really hope more of our 'old' will speak and speak fiercely. I just read Max Eisen's 'By Chance Alone'. This Canadian's memoir of the climate that allowed fascism to erupt in Europe and how he survived as a teenager and a Hungarian Jew Auschwitz and other work camps, is a powerful reminder of everything that's at stake. He laments that he has lived long enough to see the resurgence of fascism in Europe. A difficult but very worthwhile book.