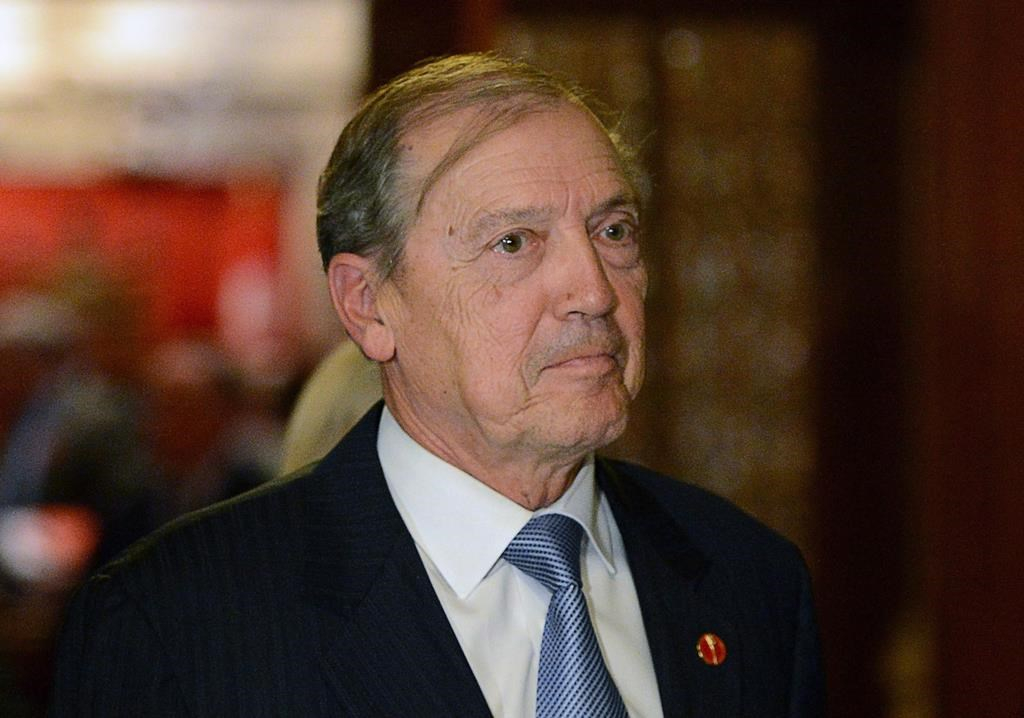 Conservative Sen. David Tkachuk says he won't apologize for comments he made at a pro-pipeline rally in Ottawa, calling criticism that he was inciting violence "manufactured outrage."

Tkachuk spoke Tuesday to the United We Roll convoy, which left Red Deer, Alta. on Feb. 14 and expressed a wide variety of demands, some related to the oil and gas sector. The convoy participants opposed bills that will overhaul environmental assessments of energy projects and ban oil tankers from the northern coast of British Columbia.

Tkachuk told the crowd, many of whom had driven across the Prairies and Ontario in pickup trucks and semis, to "roll over every Liberal left in the country ... Because when they're gone, these bills are gone."

The Saskatchewan senator said in a statement the comment was a figure of speech, in the context of an election year.

"This is manufactured outrage by the Liberals to distract from the real plight of our and gas industry and the harm they are doing to the West — to my province — with their policies," it read. "The words I used may not have been as artful as I would have liked and certain individuals are happy to misinterpret them to suit their own self-interest, but I am not going to apologize for that."

Privy Council clerk Michael Wernick prefaced an appearance at the House of Commons justice committee on Thursday by voicing grave reservations about the state of political dialogue.

Wernick did not mention Tkachuk directly but said it was "totally unacceptable" that a parliamentarian would incite people to drive trucks over others after 10 pedestrians were killed in a van attack in Toronto last year.

"I hope that you as parliamentarians are going to condemn that," he said.

Vaughan said the remark was in reference to the "whack-a-mole" carnival game, where players hold a mallet and hit targets as they randomly pop up from a board.

The senator is speaking for

The senator is speaking for the fossil fuel industry when he says reaction to his comment is simply meant to "distract from the real plight of our and gas industry and the harm they are doing to the West — to my province — with their policies."
Did western Canadian farmers not experience the drought that dried out fields across the northern hemisphere last summer? Do they stand mute, praying for better weather, or do they simply decline to comment?
Can National Observer readers not expect to hear of some murmurs of concern from a now strangely mute sector that will be in the vanguard of those affected by already observable violent changes taking place in Earth's biosphere?

What century does this

What century does this Senator imagine he is living in? And I wonder if he calls himself a Christian, while encouraging one group of people to roll over another until none are left?
Has he somehow missed the IPCC report giving us all 12 years to get it together before global warming, much of it caused by the production and use of fossil fuels, makes our survival on our one planet very difficult?
Has he not heard that renewable energy jobs are now numbering in the 10+ millions? Why is he, and all oil workers, not using their collective efforts to pressure their governments to get on with new technology and the related jobs in design, fabrication, installation and maintenance?
Honestly, is it jobs they want, or just a fight with those of us who believe the top scientists in our world, and simply want to change course to keep the place habitable for the next generations, including their children and grandchildren?