By Mike Blanchfield | News, Politics | February 26th 2019
#90 of 109 articles from the Special Report: State of Journalism 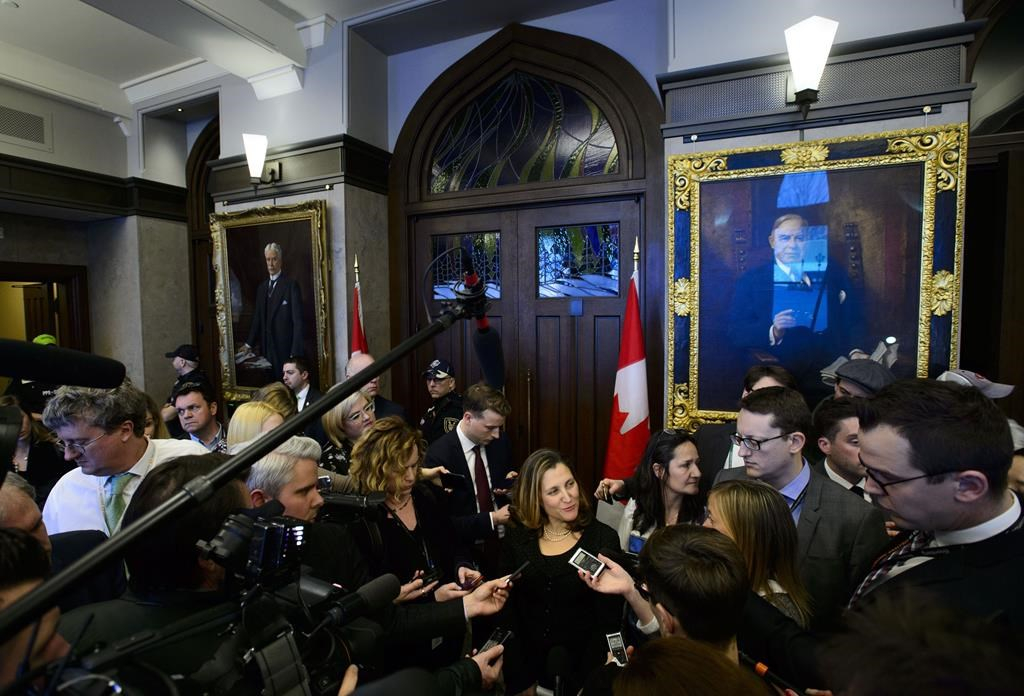 Chrystia Freeland talks to media as she makes here way through the foyer of the House of Commons in the West Block of Parliament Hill as she arrives for question period in Ottawa on Jan. 28, 2019. File photo by The Canadian Press/Sean Kilpatrick
Previous story

Canada and Britain will co-host an international summit in London this summer on the growing threats to freedom of the press, and to promote better protection of journalists, The Canadian Press has learned.

Sources say Foreign Affairs Minister Chrystia Freeland — a journalist before she entered politics — and her British counterpart Jeremy Hunt have been working on the idea for months.

Canadian officials spoke on the condition of anonymity because they weren't authorized to discuss the conference before it was formally announced.

Sources say the talks between Freeland and Hunt have progressed to the point where they have now set a date for a two-day gathering starting July 10, which will include members of governments, civil society and journalists.

They say Freeland has been influenced by two high-profile cases: the imprisonment of two Reuters reporters who were sentenced to seven-year terms in Myanmar for violating the country's Official Secrets Act and the murder and dismemberment of Washington Post columnist Jamal Khashoggi at the Saudi Arabian consulate in Istanbul last fall.

U.S. President Donald Trump has repeatedly called the news media "the enemy of the people," but sources denied suggestions that his anti-media rhetoric was also a factor.

"It's a theme Minister Freeland has been thinking a lot about in general, particularly because of the cases of the two journalists in Myanmar and the Khashoggi case," said one source.

"But also in general, the current climate is affecting journalist's ability to do their work freely." Freeland and Hunt "have this shared concern and that was the genesis of all of this."

Freeland, who used to work at Reuters, condemned the seven-year sentences meted out to Wa Lone and Kyaw Soe Oo, who were reporting on the persecution of Rohingya Muslims in Myanmar's Rakhine State. A military crackdown drove an estimated 900,000 Rohingya out of Myanmar and into neighbouring Bangladesh.

The two journalists were reporting on a massacre of the Rohingya people by the Myanmar military in 2017 and say they were framed by police.

"This verdict gravely undermines the rule of law and freedom of the press in Myanmar, and betrays the decades-long struggle by the Myanmar people for democracy," Freeland said in a written statement in September.

Britain and the United States also condemned the verdict, along with numerous international human rights organizations.

Freeland has called Khashoggi's killing "abhorrent and represents an unconscionable attack on the freedom of expression and freedom of the press." Canada also imposed sanctions on 17 Saudis linked to killing, freezing their assets and barring them from entering the country.

She has repeatedly called for an independent international investigation so Khashoggi's killers can be brought to justice.

Freeland and Prime Minister Justin Trudeau have repeatedly defended a free press as a necessary part of a thriving democracy. While they have not criticized Trump directly, their steadfast defence of the media has come amid unprecedented attacks on press freedom by the American president.

Trump has called the news media "the enemy of the people" and derided it for selling "fake news" to its readers. He has also called journalists "crazed lunatics."

"The Fake News Media in our Country is the real Opposition Party," Trump said in one January Tweet. "It is truly the Enemy of the People! We must bring honesty back to journalism and reporting!"

In December, the rights group Reporters Without Borders reported that the United States had, for the first time, formally entered the ranks of the top five deadliest countries in the world for journalists to work.

On June 28, four journalists and a sales associate were killed by a gunman who opened fire in the offices of the Maryland newspaper Capital Gazette in what was the deadliest attack on the media in recent U.S. history.

In December, the annual report by the Committee to Protect Journalists said the number of journalists killed across the world in retaliation for their work nearly doubled in 2018.