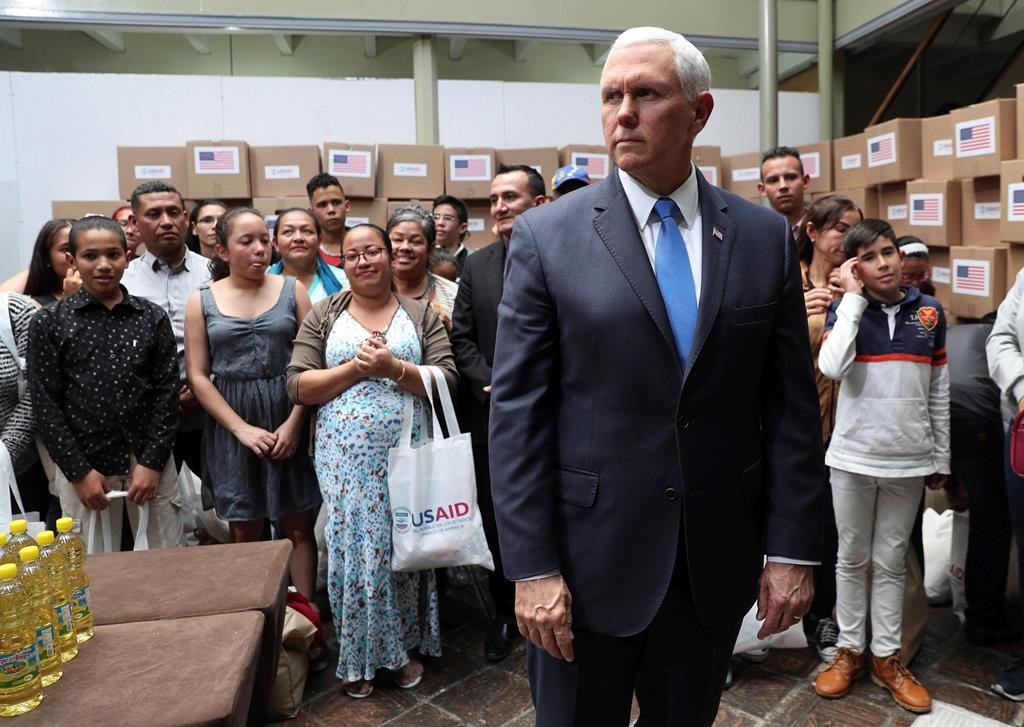 Vice President Pence stands in a room filled with humanitarian aid destined for Venezuela where he met with a group of Venezuelan migrants, in Bogota, Colombia, on Monday, Feb. 25, 2019. Photo by The Associated Press/Martin Mejia
Previous story
Next story

And she said Canada and its allies are looking at ways of ratcheting up sanctions on Nicolas Maduro, Venezuela's socialist leader, so they will have "more bite."

"Work is very much underway at quite a high level of detail on ways to support Venezuela the day after the democratic transition," Freeland said Monday from Colombia after a day-long meeting of the Lima Group countries that also includes the United States.

She said work is being done with opposition leader Juan Guaido as well as international financial institutions because there needs to be a plan to help Venezuela recover from hyper inflation and a massive humanitarian crisis that includes shortages of food and medicine.

"A lesson of history is those initial days after a democratic transition can sometimes be the most difficult," she said.

"I think medium and long term, Venezuela's prospects are excellent but there is a crisis today and part of our responsibility is to help the interim government have a really clear and effective plan."

In the shorter term, she echoed U.S. Vice President Mike Pence, who announced new sanctions on supporters of Maduro as the U.S., Canada, its Latin American allies in the Lima Group and dozens of other countries seek to propel Guaido into power.

"They are the ones who are committing flagrant abuses of human rights in Venezuela, who have systematically dismantled Venezuela's democracy," Freeland said. "We are discussing with our partners now ways that sanctions list can be expanded in order to have even more bite."

Pence called on Canada and its Lima Group allies to transfer frozen Venezuelan assets in a speech at their summit in Colombia.

The Washington think-tank Inter-American Dialogue and the Centre for International Governance Innovation in Waterloo, Ont., have proposed repurposing the billions of dollars of assets seized from Venezuela's corrupt leaders to help countries coping with Venezuelan refugees and to support Guaido's new government.

Freeland suggested it is too soon to consider doing that, saying it was a intriguing ideal worth exploring, but she added: "It's important to remember these are assets that belong to the people of Venezuela. The situation in the country is really dire, and as soon as a democratic transition has happened these are assets that are going to be desperately needed to finance a recovery plan."

Fen Hampson, the executive director of the World Refugee Council and the head of CIGI's global security program, said "there are millions approaching billions in frozen assets of Maduro and his henchmen in U.S. banks and elsewhere. Those ill-gotten gains should be repurposed to help the victims of his policies, including the three million Venezuelans who have been forced to flee political persecution and economic deprivation."

Ben Rowswell, a former Canadian ambassador to Venezuela, said the suggestion is "a promising policy prescription" that would help the international community raise the estimated $30 billion that will ultimately be needed to rebuild the country's economy.

Other countries need to start talking about a rescue package to rebuild the country's economy, which has shrunk by half, "to show the seriousness, resolve and long-term commitment to the democratic restoration of Venezuela," said Rowswell, the president of the Canadian International Council.

"My understanding from following the World Refugee Council is that they have had quite extensive international legal expertise informing that advice, and it is entirely doable to have international assets of sanctioned individuals like Maduro, and his cronies, seized," said Rowswell.

"This is a groundbreaking area of international jurisprudence … but it makes eminent sense as a policy prescription."

Three weeks ago, when Canada hosted the last Lima Group meeting, its cornerstone recommendation was to urge Venezuela's military to switch allegiance and support opposition leader Guaido as the true leader of their country.

So far that hasn't happened, but Rowswell and other analysts say there are still signs it eventually could.

Last weekend, an estimated 170 Venezuelan soldiers defected after clashes on the borders of Colombia, where pro-democracy supporters were escorting trucks filled with food and medical supplies, said Ivan Briscoe, the program director for Latin America for the International Crisis Group.

That may be a small number given the combined size of Venezuela's security forces is about 200,000 people, but it is not insignificant, said Briscoe.

"The desertion we're seeing at the moment is a slow erosion and it's not certain whether it would actually generally turn into a sufficient move to actually weaken the regime," said Briscoe. "That said, there is no doubt that discontent is great."

Venezuela: Getting Our Facts Straight

By Oscar Hernández | Opinion | February 6th 2019
Letters to the Editor