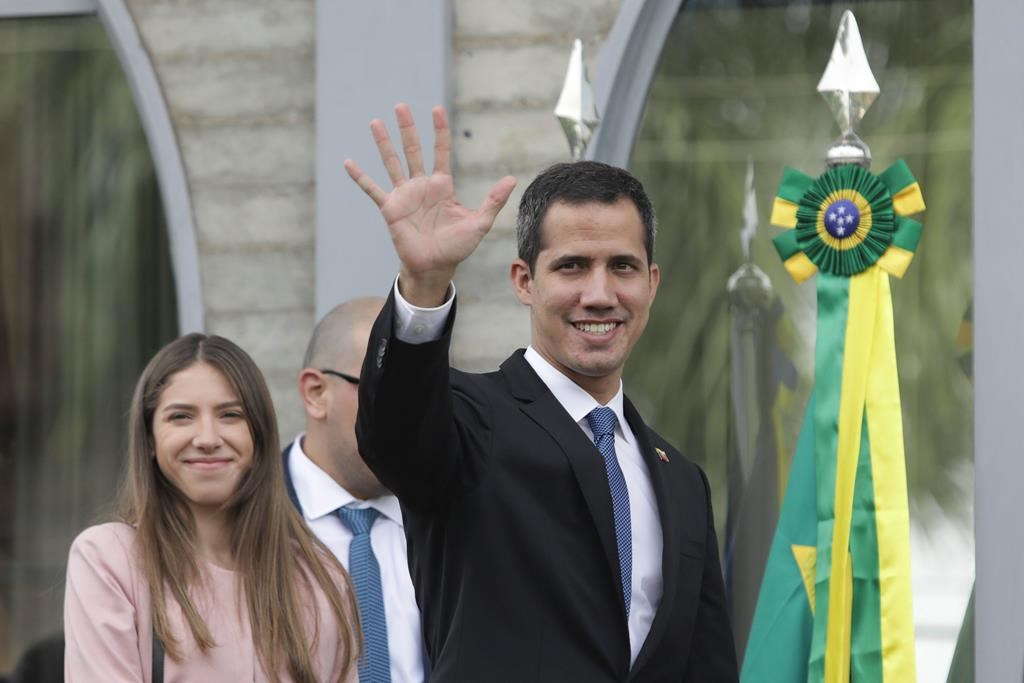 Venezuela's self-proclaimed interim president Juan Guaido waves at the press as he arrives for a meeting with ambassadors and representatives from European Union, in Brasilia, Brazil, on Thursday, Feb. 28, 2019. Photo by The Associated Press/Lucio Tavora
Previous story
Next story

Canada and Mexico may be united in wanting to bring closure to North America's unresolved trading future, but they are diametrically opposed on how to solve Venezuela's political and economic crisis.

The cleavage between Canada and Mexico over the upheaval enveloping their broader hemispheric neighbourhood — the meltdown of once prosperous Venezuela that has spawned a three-million-plus refugee crisis — was on full display this week as lawmakers from both countries met in Ottawa to discuss their shared interests.

Mexico was a charter member of the Lima Group of countries when it formed in August 2017 before socialist firebrand Andres Manuel Lopez Obrador was sworn in on Dec. 1 as Mexico's new president.

Lopez Obrador's government has been conspicuously absent from the Lima Group's recent declarations recognizing opposition leader Juan Guaido as the legitimate interim leader of Venezuela, and the group's calls for the military to switch allegiance to him from the country's socialist president, Nicolas Maduro.

"It's a very complex issue because we believe — the new government believes strongly — in not intervening in the internal affairs of other countries," Sen. Hector Vasconcelos, head of the Mexican senate's foreign affairs committee, said in an interview.

Part of that complexity involves the other major North American country that was never in the Lima Group — the United States.

As Canadian officials routinely explain, not having the U.S. in the Lima Group coalition of more than a dozen Western Hemisphere countries is seen as effective. The reason is because it divorces calls for Maduro's ouster from the baggage of what is seen as past American meddling in Latin America.

Many don't buy that rationale, pointing to the fact that the U.S. remains in lock-step with the Lima Group while the Trump administration refuses to rule out potential military action in Venezuela.

"When you have a major international power trying to impose a solution to a political situation, to a political crisis anywhere in the world, not only in Latin America, the prospects for success are not very good," said Vasconcelos.

He cited American interventions in Iraq and Afghanistan in this century and Vietnam four decades ago as some U.S. failures.

Mexico has offered to mediate between Guaido and Maduro to find a solution that's satisfactory to the Venezuelan people, Vasconcelos said.

Canada, its Lima Group allies, the U.S. and dozens of other countries say international support for the opposition is intended to embolden Venezuelans, with the help of a military it wants to see switch loyalties, to take democratic control of their country.

"If the armed forces decide to stop supporting president Maduro, then that would be finding an internal solution," he said, stressing that doesn't mark a departure from the current Mexican position. "Believe me there are reasons for this. And I think that Mexico derives benefits from that position even today after 100 years of trying to follow that line."

A Liberal MP who took part in this week's parliamentary meetings with Mexico says Canada is trying to persuade Mexico to support the Lima Group.

"Obviously, Canada has a difference of opinion. We think Mexico, as a serious player in the hemisphere, should be working with us. They haven't walked away from Lima necessarily, but they're being very cautious," said Bob Nault, the former head of the House of Commons foreign affairs committee.

"My advice is to keep working with Mexico very quietly to convince them the policy of the past is not going to work in the scenario that's unfolding in Venezuela and other countries."

Despite the difference on Venezuela, Vasconcelos and other members of the Lopez Obrador's governing Morena party see several broad areas of co-operation with Canada. In addition to ratifying the newly renegotiated North American free trade pact, these issues include trying to tackle the northward flood of migrants from Central America, and combating climate change without a willing partner in the United States.

"Mexico and Canada agree on many things, but not the United States and that's an awful thing because the United States, their environmental impact is really big," said Mexican Sen. Antares Guadalupe, also a Morena member.

"It is important to try and get the United States with us in these efforts."

Venezuela: Getting Our Facts Straight

By Oscar Hernández | Opinion | February 6th 2019
Letters to the Editor

The fact is that

The fact is that international observers who went and observed the presidential elections which Maduro won, concluded that they were free, fair and transparent, just like the last dozen or more Venezuelan elections. And I'm not even talking the kind of "Well um I guess it's OK" that you get in places like, I dunno, most of the Lima group. I'm talking in many ways better than Canada. The US did not send observers (probably since they knew what those observers would find and didn't want to go to the trouble of suppressing the results). Neither did the UN (after the US leaned on them not to send any). Even though the Venezuelan government invited both.

So. Whatever the economic turmoil in Venezuela, Maduro is the legitimate elected president. Guaido is not, he's attempting a coup at the request of the US and Canadian governments. Canada should be even more ashamed of this action of our government than of Trudeau and co.'s actions around SNC-Lavallin. Under cover of empty, dishonest rhetoric about democracy and the rule of law, the Trudeau government is helping Donald Trump scheme their overthrow.

Even calls for "dialogue" are disingenuous. There is nothing to have a dialogue about. If the opposition parties want to run Venezuela, they can offer up a good enough policy vision and trustworthy enough proponents of it that their control of much of the media will allow them to win elections. Up to now, Venezuelans have usually failed to vote for parties who call for American invasions of their country; why this supposedly astonishes the members of the Lima group is unclear.