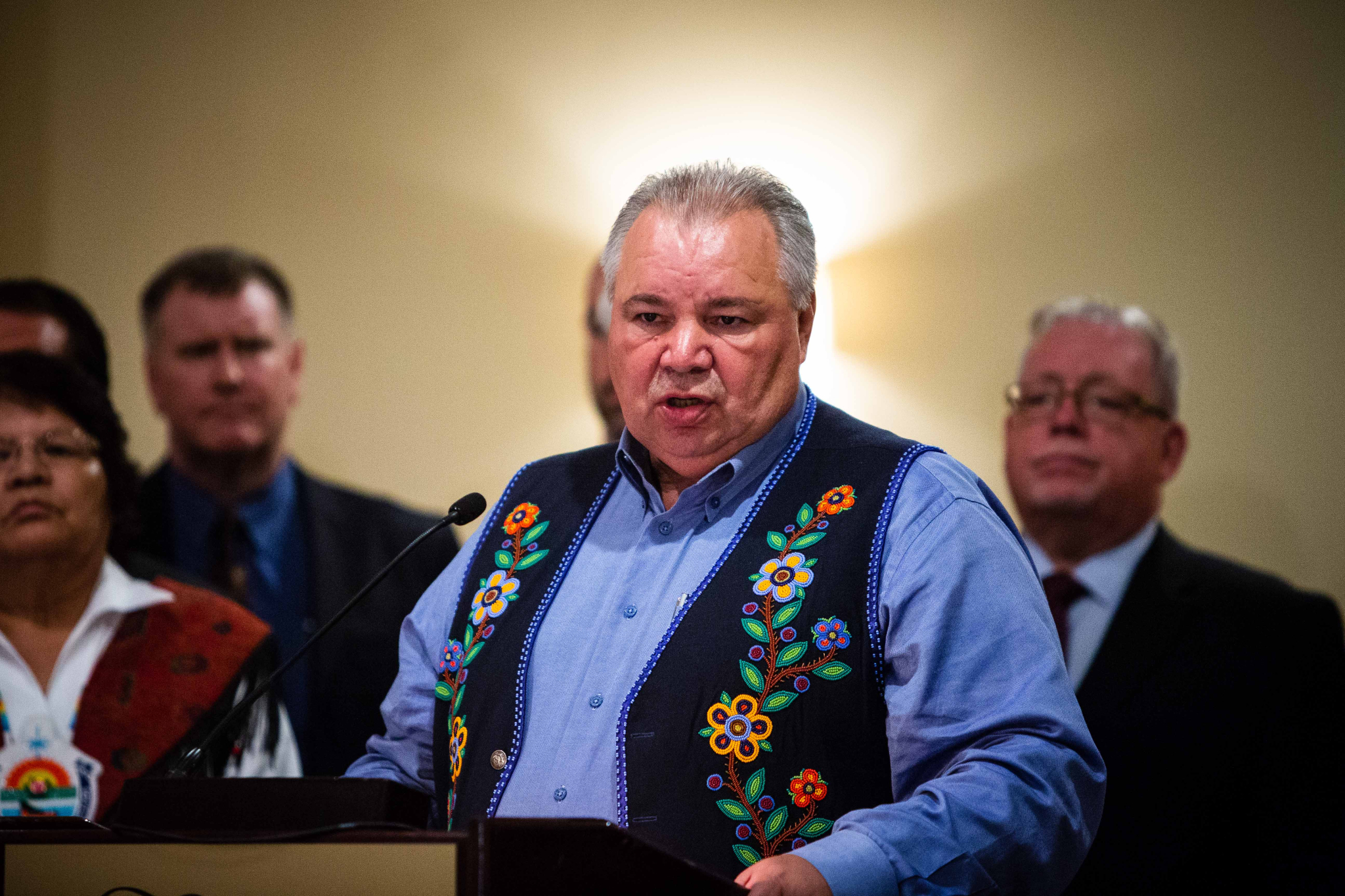 David Chartrand, president of the Manitoba Métis Federation, speaks in support of the Trans Mountain pipeline expansion on May 23, 2018 in Ottawa. Photo by Alex Tétreault
Previous story
Next story

A senior member of the Métis Nation is backing Justin Trudeau in the wake of Jody Wilson-Raybould's testimony, arguing Indigenous relations with Canada shouldn't be defined by the testy relationship between the prime minister and his former attorney general.

His comments follow Métis National Council president Clément Chartier's Feb. 20 declaration that he stood "with the prime minister and his government" concerning the SNC-Lavalin affair, and that no Canadian government in history has done more to bring Métis people into the federation.

Wilson-Raybould resigned her seat at the cabinet table on Feb. 12 after being shuffled to the veterans affairs portfolio, following what she called inappropriate pressure from Trudeau and a string of government officials to help Quebec-based engineering company SNC-Lavalin avoid a criminal trial.

On Wednesday in front of the House of Commons justice committee, she accused Trudeau, Finance Minister Bill Morneau and their aides of applying relentless and inappropriate pressure on her when she was minister of justice and attorney general.

Chartrand has previously spoken out in support of another Trudeau government initiative, the Trans Mountain pipeline. In May 2018, shortly before the government announced it would buy the pipeline with public money, he said at a press conference that Indigenous people were “being used” by anti-pipeline protesters and asked for them to "go home."

In his statement Friday, Chartrand said he was concerned that Wilson-Raybould's comments "may form the narrative of the relationship" between the government and Indigenous rights holders.

"It would be unfortunate if the media continued to give the impression that Indigenous peoples as a whole do not support the prime minister. Let me be clear: The Métis Nation supports Justin Trudeau and his government," he said.

"The work this government has accomplished under the leadership of Prime Minister Justin Trudeau, with support from ministers such as (Crown–Indigenous Relations Minister) Carolyn Bennett, is a first and has moved forward the relationships and livelihoods of Métis across the homeland."

In split with broad Indigenous support for former attorney general, senior Métis leader @MMFPrez backs @JustinTrudeau, says that @Puglass has "abandoned her post" before a settlement with Métis veterans.

In the days after Wilson-Raybould's remarks, some Indigenous leaders and advocates have expressed their support for her.

Grand Chief Stewart Phillip of the Union of BC Indian Chiefs said he "unequivocally stands behind Jody Wilson-Raybould and denounces the inappropriate efforts of the Trudeau government to undermine her prosecutorial discretion and secure a strategic deferred prosecution agreement with SNC-Lavalin.”

APTN News has also reported that Indigenous politicians have been split on their support.

Robert Falcon-Ouellette, co-chair of the Liberal Indigenous Caucus, told APTN that Wilson-Raybould could have been more flexible, while Manitoba Keewatinowi Okimakanak grand chief Garrison Settee praised Wilson-Raybould's "truth-telling testimony" to the news outlet as "one of those moments where Indigenous people stuck to their principles."

Assembly of First Nations national chief Perry Bellegarde said on Thursday that Wilson-Raybould's suggestion that the justice committee study the possible separation of the roles of justice minister and attorney general meant that "something good can come out of this."

Chartrand's federation is one of the five governing members of Chartier's national council.

In his Feb. 20 statement — released after Wilson-Raybould had resigned from cabinet but before she gave testimony to the committee — Chartier said citizens of the Métis Nation "will have to make up their own minds on the Trudeau government" in the upcoming national election.

But he added the Trudeau government, "more than any other government in Canada's history," brought Métis people into the federation "and as full participants into the social life and economy of our great country."

"We stand with the prime minister and his government in maintaining and building on this relationship and expanding opportunities for our people to have a better life in Canada," he said.

Asked his response to Chartrand's comments Friday, Chartier's executive assistant and communications officer Ke Ning pointed to the Feb. 20 statement, saying it "speaks for itself."