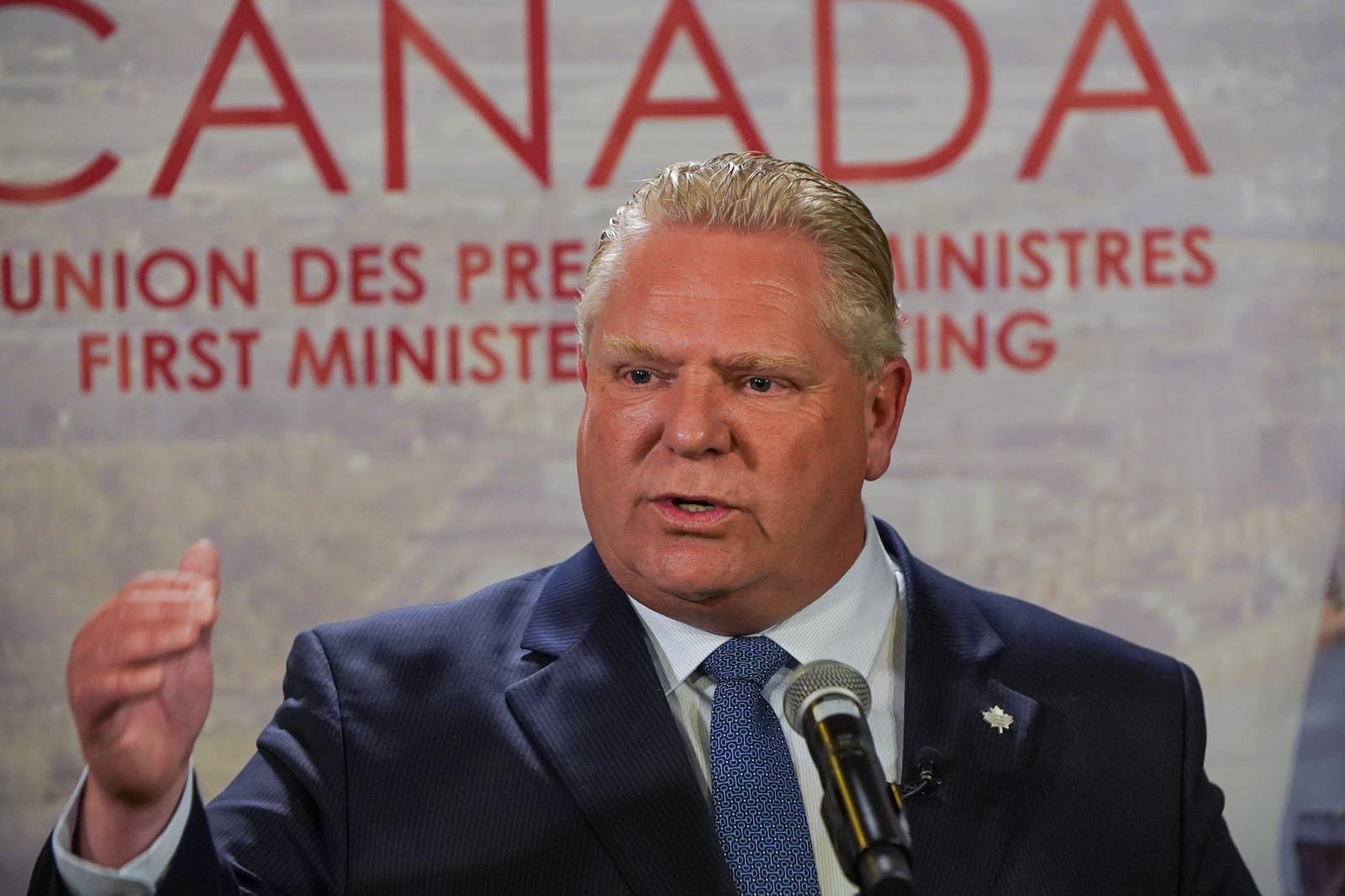 Outspoken Ontario police deputy commissioner Brad Blair is out of a job after accusing Premier Doug Ford of interfering with police operations.

Blair had spoken out against Ford on several issues, including the nomination of the premier’s friend as the new police commissioner, as well as Ford’s efforts to get a personalized travel van, while keeping it “off-the-books.”

Blair, who was serving as interim commissioner, is asking an Ontario court to legally mandate the province’s ombudsman to investigate the appointment of Ford's longtime friend Toronto police Supt. Ron Taverner, 72, as the new head of the police force.

Carolle Dionne, a spokesperson for the Ontario Provincial Police told National Observer in an email that Blair "was terminated this morning (March 4) at the direction of the Ministry of Community Safety and Correctional Services (MCSCS), as approved by the Public Service Commission."

"An interim incumbent will be identified by the ministry," the spokesperson added.

The shocking termination comes after Blair faced internal pushback from police union boss Rob Jamieson, who wrote to Maria Di Tommaso, deputy community safety commissioner, last Thursday. In his letter, Jamieson noted that Blair’s decision to release an email expressing the premier’s concerns about unfamiliar officials staffing his security detail caused harm to a police officer involved, according to reports from The Globe and Mail and the Toronto Star.

The officer who was the subject of the emails released by Blair has since been removed from the detail, the letter said, despite the fact that he “has done absolutely nothing wrong.”

Neither Blair, nor his lawyers could be reached for comment.

Di Tommaso, used to be Taverner’s boss when he served with Toronto Police, and was also a member of the hiring committee that appointed Taverner to the top cop position.

The government made contradictory claims Monday that the decision was made “independently” by the police force without their knowledge or involvement, but OPP spokesperson Dion told National Observer in a phone call that while Couture was consulted on Blair’s termination, “ultimately the final decision was the deputy minister’s.”

Ontario NDP leader Andrea Horwath interrupted the legislature's question period Monday to alert the members about the “absolutely chilling” news of Blair's removal. She condemned the firing of "the only person who was acting with integrity in this whole fiasco.”

There is a cesspool of political interference surrounding the Ron Taverner appointment.
Brad Blair is a distinguished officer who deserves better than to be fired by the Ford government for blowing the whistle to protect the OPP’s integrity. #onpoli

"The public service commission in consultation with the OPP made a decision independent of the political process to terminate the employment of Mr Blair," she told the legislature Monday.

“I will not be commenting, nor should anyone else on private HR issues,” she said.

Speaking later at a news conference, Jones told reporters “there was zero political interference” in Blair’s dismissal, noting that the dismissal came from Di Tommaso, the deputy minister of community safety and correctional services, and was approved by the Public Service Commission.

Jones repeatedly told reporters Monday afternoon that she “was not asked for permission or advice.”

But, according to an internal memo obtained by iPolitics, Di Tommaso informed Jones of the impending move on Friday, calling his termination a “serious step” that needed to be taken because Blair acted “contrary to instruction” and “contrary to his legal and ethical responsibilities as a deputy commissioner and senior public servant.”

“I am writing to inform you that earlier today, after careful consideration of legal advice, I recommended to the Public Service Commission that the Commission exercise its authority under the Public Service of Ontario Act, 2006 to terminate the employment of Deputy Commissioner William Bradley Blair,” Di Tommaso writes in the memo.

“The Public Service Commission has accepted that recommendation.”

Jones told reporters repeatedly that only a notification of Blair’s termination was communicated to her — a decision that was made in consultation with Interim Commissioner Gary Couture. She refused to answer questions about who Couture may have consulted in the process.

“The decision was made, the information was given to me, as minister,” she said, noting again that her advice was not requested.

But Jones’ remarks claiming no knowledge of how the decision was reached changed half hour after her press conference when she stood to give a statement in the legislature’s afternoon sitting.

She told provincial parliament that Blair was dismissed in part because of his disclosure of “confidential information” to media and in court filings, citing a section of the code of conduct under the Police Services Acts that “prohibits a police officer from communication to the media without proper authority.”

“All public servants take an oath of office. It appears this oath was breached,” she said. “(Blair) released confidential, private information for his own personal gain. He used his role, and uniform, for his own desire to the commissioner of the OPP.”

“It is for these reasons that I was notified of his dismissal earlier today.”

Previously, Taverner has previously commented to the Toronto Sun on the hiring process, but soon after had those comments scrubbed from the story.

Liberal MPP Nathalie Des Rosiers responded to the news by calling for parliamentary hearings to investigate the firing.

"This harsh disciplinary action comes after he raised legitimate concerns about the process surrounding the proposed appointment of Ron Taverner as the next OPP Commissioner, as well as concerns about various requests from the premier's office, including 'off-the-books' changes to the premier's transportation van and changes to the schedule of the OPP officers accompanying the premier," wrote Des Rosiers in a letter to the chair of the parliamentary justice committee, Tory MPP Parm Gill.

"Interim Commissioner Brad Blair's dismissal raises concerns about interference from the premier's office and the minister of community safety and correctional services in the OPP management," Des Rosiers wrote.

Please see my letter to @ParmGill , chair of the Justice Committee, requesting Mr. Di Tomasso’s presence at the committee. It’s time for clarity in the Ron Taverner case. #Onpoli pic.twitter.com/3wkN5M5Lg3

“The premier and the premier’s office should be embarrassed by those emails,” he told reporters, referring to the emails that led to Blair’s dismissal. “You have the premier of this province interfering in police business.”

Opposition leaders were quick to recall that this is not the first time Ford has been accused of interfering in policing operations. In November 2018, the premier’s chief of staff Dean French wanted officials to order police to raid outlaw cannabis stores on the day the drug became legal, sources told the Toronto Star.

Green Party leader and MPP Mike Schreiner is calling for a public inquiry into the scandal, saying he is “deeply concerned” about the government’s apparent interference in the operations of provincial police.

"We need a Jody Wilson-Raybould on the government benches to speak truth to power and tell the Premier to stay out of police business," writes @MikeSchreiner after today's abrupt firing of the deputy OPP commissioner. https://t.co/tY8M2KkB8K #onpoli

According to court filings, emails disclosed by Blair show details of a customized van Ford sought from the OPP, which NDP MPPs have dubbed as a “souped-up man cave on wheels” and “a Taj Mahal on wheels.”

Among many additions, the over $50,000 van is shown to include a reclining leather sofa, mini-fridge and a 32-inch television with a Blu-ray player.

In a July 2018 email that was submitted with the court filings, Ford is quoted as saying “It feels like I’m not being heard, like I’m getting f---ed around by the OPP and I’m getting more pissed off.”

“I’m going to call the commissioner and sort this out,” he said in the email. “This is the last straw.”

Ford's government invoked extraordinary powers to change municipal election rules and cut Toronto city hall almost in half in the middle of an election campaign, while a Washington state regulator citing political interference in denying Hydro One a takeover. Then there is the allegation that French intervened to have Alykhan Velshi, an ex-staffer for former PC Party leader Patrick Brown, removed from a middle management job at Ontario Power Generation.

In addition to requesting an investigation by Ontario’s ombudsman into Taverner’s appointment, Blair has also threatened to sue Ford, alleging that his reputation has been damaged by the government’s accusations that he acted in an unprofessional and unethical manner

An investigation by the province’s integrity commissioner is also underway; Taverner’s appointment has been delayed until its completion.

OPP spokesperson Carolle Dionne told National Observer that Blair's replacement would be appointed by the government. Interim Commissioner Couture can "provide feedback," she said but "ultimately, the ministry decides" whether they consider his feedback or not during the consultation process.

Editor's note: This story was updated at 6:10 p.m. EST with additional comments from Ontario MPPs and details about Brad Blair's court filings.

Calling this situation "fishy" is an insult to the entire fish species. Only humans can make the kind of stink that is billowing up in the wake of Premier Ford's petulance. The question really is - just who does Ford think he is? a tinpot dictator? He certainly acts like one - no vestige of any intellectual or ethical rigour in his conduct as a political operative. As for the "man cave on wheels", our plus sized premier would obviously require a plus sized/appointed wheeled barge to accomodate his inflated sense of entitlement. How is it all these millionaires who rise to governing positions cannot spend their own money on the luxuries they require the taxpayers to fund - to further their self-importance?!

If you are looking for a person or entity to blame for this, blame the Progressive Conservative Party of Ontario. In our regressive first-past-the-post system they have the responsibility to present Ontarians with a real candidate and not someone like Mr. Ford. Entrusted with this responsibility they chose a crazy electoral-college-like system and the result was that Mrs. Christine Elliot had more votes and more ridings than Mr. Ford, but still, somehow, lost out to Mr. Ford when the 'electors' were counted up.

Ontarians, after nearly two decades of Liberals (I think that's right?), were simply looking for change: I'm sure that if Mr. Doug Ford's neighbour's cocker spaniel was on the ballot instead, s/he still would have won in a landslide.