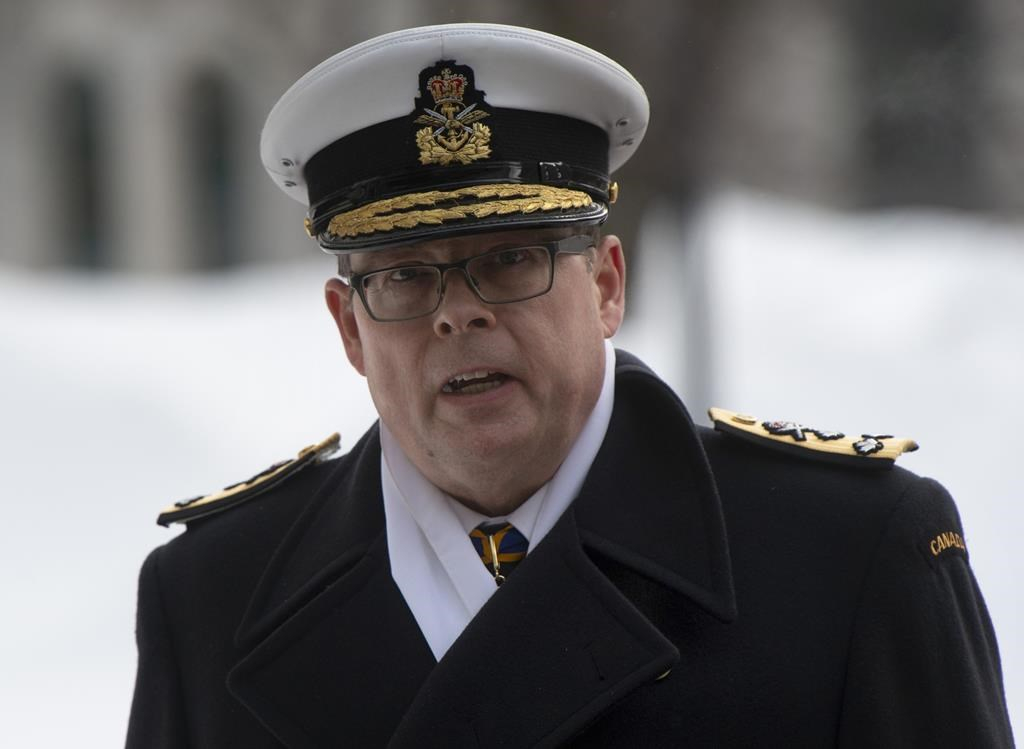 Vice-Admiral Mark Norman makes his way to the courthouse in Ottawa, on Wednesday, Jan. 30, 2019. Photo by The Canadian Press/Adrian Wyld
Previous story
Next story

The second public official accused of leaking cabinet secrets about a $700-million naval contract intends to fight the charge, according to his lawyer.

The assertion by Matthew Matchett's lawyer was made on Tuesday during a brief court hearing, the first since the suspended Public Service and Procurement Canada official was charged with one count of breach of trust last month.

Lawyer Matthew Day told the court that his client, who did not appear in person, plans to plead not guilty and seek a jury trial as the case, which is expected to have many parallels to Norman's, moves through the judicial system.

Matchett is the second person after Vice-Admiral Mark Norman, the military's former second-in-command, accused of leaking information about the contract between the federal government and Davie Shipbuilding in Quebec.

The contract, negotiated by Stephen Harper's government and finalized by Justin Trudeau's new government in 2015, involved leasing a converted civilian ship to the navy as a temporary support vessel.

Norman has denied any wrongdoing. The court has so far heard several days of pre-trial arguments as Norman's lawyers fight for access to thousands of government documents related to the case. A formal trial is scheduled to begin in August.

Day told the court that he had received a "voluminous" amount of documents from the Crown that would need to be reviewed.

Speaking to reporters afterward, Day said many of the documents contained redactions — blacked-out sections — and that he may have to follow Norman's lawyers in seeking more information from the Crown and government.

At the same time, he said the results of that legal fight, which is scheduled to resume with another pre-trial hearing day on Wednesday, could affect what other documents are freely provided to his client.

Day would not comment on how his client was doing, saying he would leave it to Matchett to comment himself at a future date.

RCMP investigators had previously indicated in court filings that they believed two government officials, acting independently of each other, had leaked government secrets in November 2015.

That was when the new Trudeau government decided to hold off finalizing the contract with Davie pending a review. It ultimately decided to approve the deal a few days later.

Court filings from Norman's team in October identified the second person as Matchett, who worked at the time at the Atlantic Canada Opportunities Agency. He later moved to Public Services and Procurement Canada.

The filings included emails obtained by Norman's lawyers from the RCMP that seemed to show Matchett updating Ottawa lobbyist Brian Mersereau, whose clients include Davie, as the Liberals prepared to review the deal.

They also talked about Matchett dropping off documents — referred to as "the motherload" — at Mersereau's office.

Mersereau later told the RCMP in a witness interview, also obtained by Norman's lawyers, that he found a draft memorandum to cabinet and two PowerPoint presentations waiting for him when he returned to the office.

The RCMP reported in separate court filings recovering a draft memorandum to cabinet and other secret documents after a search at Mersereau's firm, Hill+Knowlton Strategies.

None of the documents or witness statements has been entered as evidence or tested in court. The charges against Matchett and Norman have similarly not been tested in court.

Court heard in December, during a pre-trial hearing for Norman, that Matchett's security clearance was withdrawn last June and he was suspended without pay in October after Norman's legal team named him in filings.