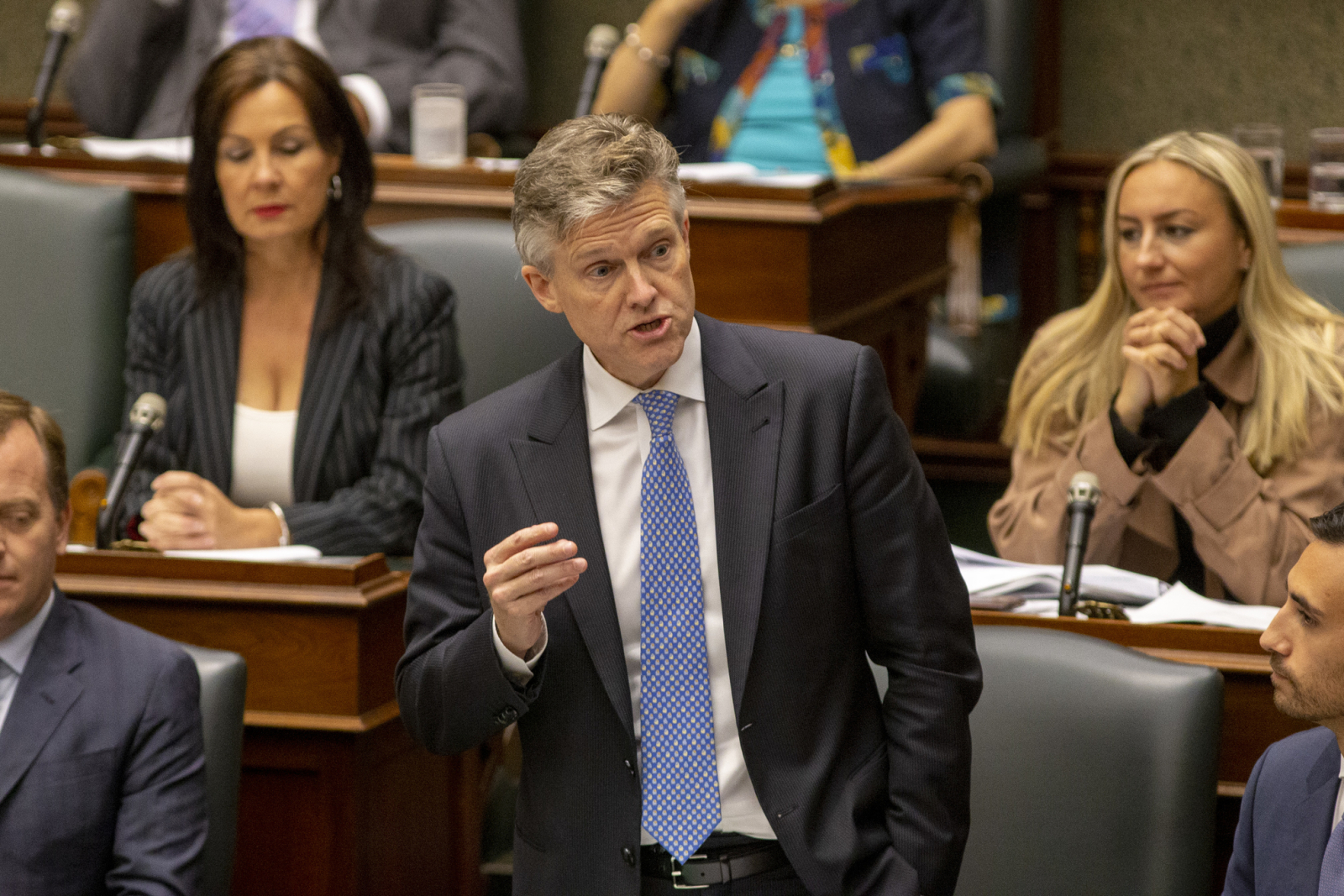 Ontarians have consistently recycled almost a third of their waste every year for the past decade, the province’s environment minister said at a breakfast event on Tuesday, as he hinted at policies that go beyond an election promise to clean up litter and tear apart carbon pricing.

To start, Ontario will explore how to reduce garbage by exploring ways to make producers responsible for packaging; ways to recover energy from waste; ways to reuse excess soil and redevelop commercial land more effectively; and dictate clear, concise rules on compostibles, Environment Minister Rod Phillips explained to the business crowd in Mississauga.

The details are to be released on Wednesday in a new discussion paper from his department, Phillips said.

He didn't reveal whether the province is planning to achieve its new objectives through regulations or by creating incentives or a voluntary program.

But Phillips spoke at length with Mississauga’s Board of Trade, about the Progressive Conservative government’s efforts to reduce regulations for businesses across the province while balancing environmental protections.

Phillips released a “made-in-Ontario” climate plan in November 2018 that, alongside the province’s scaled-back regulations of industrial greenhouse-gas emitters and a $400-million carbon trust, includes the creation of an official day dedicated to picking up litter.

At the time, Phillips said the government will consult with residents about how to improve waste management across the province — a consultation that closed last week, and has received over 1,400 comments.

On Tuesday, Phillips indicated that there were many more policies in the works that would “modernize” environmental regulation to create "a more business-friendly environment" that would encourage development.

In the coming weeks and months, the province will also be "modernizing" the Environmental Assessment Act, which mandates an extensive consultation process and consideration of environmental protections and conservation for any proposed development.

Phillips noted that when the act was first written in the late 1970s "it was a highly innovative piece of legislation and a model for many others," but that it hadn't been "modified" in two decades.

As part of the controversial Bill 66, which the government says would streamline reporting processes across the province, Phillips is also proposing to repeal the Toxics Reduction Act by 2021.

The act demands industry to report publicly on their use and reduction of certain toxic substances every 5 years. Unclear is how this will impact communities already dealing with toxic emissions, who are demanding more data. In October 2017, a joint investigation by National Observer, Global News and the Toronto Star exposed a pattern of industrial leaks and spills in Sarnia, Ontario with no alerts from the city and few consequences for the companies. One year later, little had changed.

In July 2017, five local petrochemical companies that said they couldn’t meet Ontario’s stringent benzene standard and were approved instead for an alternative process, called a “technical standard.” Under this standard, companies are not breaking the law if they don’t meet the benzene standard - but are required to make progressive technical modifications, including greater leak detection and repair.

On Tuesday, Phillips told Mississauga businesses he visited the petrochemical industry in Sarnia, Ontario recently, where he met with the general managers, who said they had never met an environment minister before them. Phillips said they told him they believed the previous Liberal government considered their production of petroleum "evil."

Phillips said repealing the Toxics Reduction Act would end the duplication when it comes to toxicity reporting, which is already required by the federal government. According to the bill, by 2021, all substances regulated by Ontario will be covered by the federal program. "We don't think our industries should have to do the same things twice," he said.

According bill 66, "to reduce regulatory burden for facilities while maintaining oversight over release of industrial wastewater, the government would transfer applicable requirements from the nine regulations into the (Environmental Compliance Approvals) for these facilities, and then revoke the nine regulations."

Changing MISA would "allow those industries to continue to operate without regularly having to report," Phillips said, so they could focus on being more innovative and competitive.

The minister also told the Mississauga business audience that the province's Environmental Activity and Sector Registries (EASRs), which provides permits to take water, and for storm and sanitary sewers, during development, would be expanded to "a permit-by-rule" system that would allow business to begin operations faster.

"So when we're discussing what rules and regulations we can cut at the caucus table, we as a government truly do understand that the wealth of our country and the resources of money that allow us to afford the healthcare, afford education, afford transportation, that that is generated by a vibrant and active private sector," he said. "We understand, and I understand very much as a business person, that all (those regulations) put your money and your investors at risk."

‘Reduction in greenhouse gases came at a price’: Phillips

The government's efforts so far have been rooted in three principles "that our leader has driven home to each of us in caucus," Phillips told the Mississauga audience in the prelude to the proposed changes. Those principles are: proving affordability, increasing competitiveness and balance.

To date, Ontario's Ministry of Environment has eliminated what Phillips touts as the previous Liberal government's "unaffordable and ineffective" cap and trade program, noting Tuesday that "everybody including the leader of the Green Party said the program was no longer effective."

The ministry has also cancelled the Drive Clean Program to make room for a different emission standard for diesel trucks. A public consultation to repeal the Endangered Species Act to find "efficiencies for business" ended Monday.

Phillips has also put forward two new proposals. One is a plan to to impose a carbon tax-like emissions standard on industrial facilities that would limit the growth in pollution by setting greenhouse gas emissions to a facility's level of output or production. The other proposes to eliminate the mandatory reporting of carbon pollution from the fuel sold by oil and gas companies

Oil and other fossil fuels produce greenhouse gas emissions when consumed as energy; this pollution contributes to climate change and must be dramatically reduced to avoid the worst impacts of severe floods, extreme weather and heatwaves, say scientists. In October, United Nation's Intergovernmental Panel on Climate Change predicted there are 12 years to contain global warming to a maximum of 1.5C or risk further extreme weather occurrences.

"Its a system that tough but fair, its cost effective and it’s also customized to the circumstances of our province," he said.

When asked about what the minister is doing to help business that suffered as a result of the cancellation of the cap and trade program — including two hydrogenics companies in Mississauga — Phillips said the government had been elected "very clearly" to end that program and that they believed it "was the wrong-headed approach."

In its wake, Phillips emphasized the Ontario carbon trust proposed in the Progressive Conservative government's climate plan, which, he said, will leverage private money and support businesses that are making "demostrable reductions in greenhouse gases."

"It’s a different view from the previous government and we don’t apologise for it," he said. "We don't think government is very good at picking winners and losers when it comes to business... but we do want to, where appropriate, provide support."

"We’re going to achieve these goals without imposing a carbon tax or raising electricity rates," Phillips said. "As business people and citizens of Ontario, You should never feel in any way uncomfortable or ashamed of the contributions all of us have made in terms of greenhouse gases.”

Phillips told the audience that the 2005 elimination of coal plants from the province has reduced emissions in Ontario by 22 per cent as compared to the three per cent reduction in the rest of the country. "That reduction in greenhouse gases came at a price," Phillips said. "It was the right thing to do for the environment. It also cost $40 billion."

Phillips added that the government was boosting the province's manufacturing industry by reducing red tape, without offering specific details.

"New technology is cleaner technology," he said, noting that he had visited Honda's manufacturing plants in the United States recently. If industries don't move in that direction they are at risk of heading on a "non-virtuous circle downwards."

"If you don't create the certainty we need around business...gradually you see the quality of your manufacturing base get dirtier and dirtier, less efficient and less efficient till it leaves," he said. "That is the place we're at today. The previous government had that kind of relationship with the business community."

"It’s part of the big picture, but that our objective," he said. "We want to be a place where you put the latest technology for your big industrial facility. That will drive down emissions, that will increase efficiencies, that will increase jobs and that’s what they all want."

McKenna shouldn’t be ‘so dogmatic’ about carbon tax: Phillips

The Mississauga business community briefly asked Phillips about Ontario's ongoing legal battle with the federal government over the carbon tax that is set to take charge on April 1. The moderator asking the minister what his solution was for the issue.

Phillips said that from the onset of his appointment he had spoke to federal Environment Minister Catherine McKenna ("who is actually a delightful lady,” he said) about the topic.

Both agree on the objective of tackling climate change, Phillips said. "How we do that shouldn’t be the important point, he said, noting that he has encouraged McKenna, both publicly and privately, "to not be so dogmatic about requiring a carbon tax."

Phillips had previously endorsed carbon pricing after being recruited as a Tory candidate under former Progressive Conservative leader Patrick Brown. Now he has a different position.

"We cannot afford as a province, to layer one more level of taxation on our businesses and on individual families. We simply can't," he said. "More importantly than that, from my point of view, we don’t have to."

"Because of investments we’ve made in the past, and governments like to take credit for this but its all of us collectively who paid for it, we were able to establish a target...and agree to meet it and be confident in doing that without applying a carbon tax," he said.

"Nobody believes that a government is going to increase taxes and put more money in your pockets."

The claim about the

The claim about the requirements of the Toxics Reduction Act to be duplicating federal requirements is bogus. Writing for Prevent Cancer Now in a submission on Schedule 5 of Bill 66, Dr. Meg Sears, a toxicology specialist, writes: "The submission by the Canadian Environmental Law Association, and writings by David McRobert LLB, have detailed the history and successes of the TRA and similar Acts in achieving measurable reductions in use of toxic substances in industries, as well as emissions of toxic substances." The TRA deals with uses and emissions, and plans on how to reduce them, while federal requirements relate to reporting only.