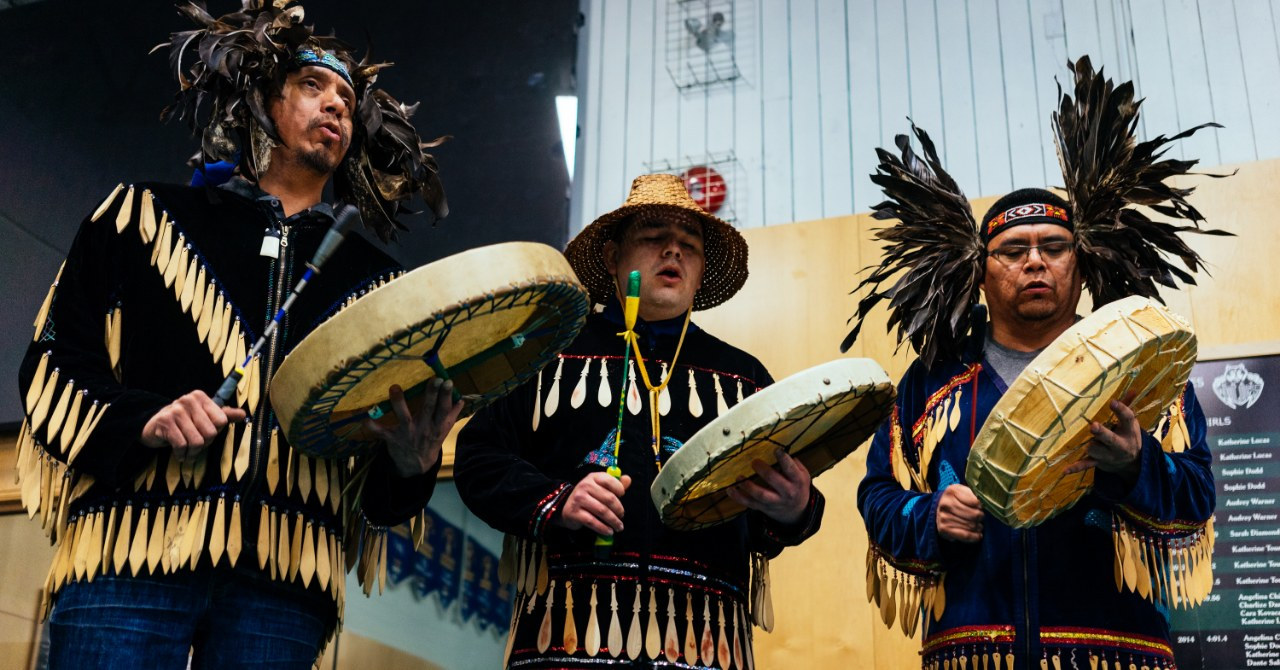 Indigenous drummers and dancers set the mood at the launch of the Jericho Lands consultations. Photo by Michael Ruffolo
Previous story
Next story

Centuries ago, the Jericho Lands were home to large cedar plank longhouses, where thousands of people from up and down the Pacific Coast would gather.

They would fish for smelt, coho and chum from nearby creeks and the ocean and hunt for deer and elk on the land. The people of the Musqueam, Squamish and Tsleil-Waututh Nations called it ʔəy ̓alməxʷ  or the slightly different Iy ̓álmexw. It was pronounced Ee’yullmough.

Now, the three nations and the Canada Lands Corporation, who together own the land, and the City of Vancouver, are inviting Vancouverites to create a vision for the area’s future.

Calling the historic process “Inspire Jericho," the partners launched a two-year community consultation process on Saturday to determine what this 90-acre parcel of land in Vancouver’s Point Grey neighbourhood, home to sweeping, jaw-dropping views of Burrard Inlet and the North Shore Mountains, will look like for the next century.

Will the lands be home to high-rise condos, densely packed shopping strips and new Broadway subway stops or meandering walkways, sprawling lawns and westside mansions? That answer won’t be known until at least 2021, because the partners want community members to help make the decision.

Chief Wayne Sparrow from the Musqueam Nation told a crowd of about 300 people who came out to get a first look to rest assured, there will be full consultation.

“If anybody knows what consultation is, it’s us,” Sparrow said. “I want to assure each and every one of you that we’re here and we respect our relationships with the federal government, the provincial government and the City of Vancouver. Hopefully this will be a journey we can all go on together.”

The lands lie between Fourth Avenue and Eighth Avenue and stretch from Highbury Street to near Discovery Street, where Trimble Park begins. There are two parcels, with the one to the east zoned for single or two-family homes, including secondary suites and laneway houses, and the western half zoned for many uses including residential, cultural, recreational, institutional and public utility. Those zonings could be changed through the planning process.

The land is on the unceded traditional territories of the Musqueam, Squamish and Tsleil-Waututh Nations and is owned by the three nations, under the name MST Nations, and the Canada Lands Company.

Chief Maureen Thomas, an elected chief of the Tsleil-Waututh people, said her hope is that this growth can be embraced and done in a positive way.

‘We have taken care of these lands for thousands of years’

But even earlier than that, for thousands of years, it was home to Indigenous people including the ancestors of Khelsilem, an elected councillor with the Squamish Nation. About six years ago, he said he was given an ancestral name by his grandmother.

“For those who might not know, the giving of ancestral names in our three cultures is considered a big honour, Khelsilem said. "With it comes the responsibility to carry that name in high esteem to the level that your ancestors carried it and to perpetuate the character and good deeds that they encapsulated,” he added. “We carry that name — we don’t own it — but then we hand it down to the next generation.”

The name he was given came from “Old Man Tom,” his great-uncle several generations back, who was born around 1800 and lived in the Ee’yullmough village’s long house with his relatives, including Jericho Charlie. Charlie worked for Rogers, transporting lumber by canoe from what is now Point Grey to what is now downtown. Charlie’s son Dominic Charlie said in 1971 that his father lived in a longhouse on Jericho Beach that could hold 1,000 people.

“The message I really want to share is that these lands were always ours. We were given these lands by our ancestors,” Khelsilem said. “Our ancestors lived here for thousands of years.”

Since the time of Old Man Tom and Jericho Charlie, Jericho Beach has been home to a golf course and a seaplane base, but today it’s a public beach and park. The lands that will be redeveloped are the hills that sit above the beach and park. From about 1930, most of the property operated as a national military base.

In 2014, a $307-million deal saw the eastern portion of the land as well as two other large properties transferred from the federal government to the three nations and the CLC. The military brigade moved to the Seaforth Armoury in 2018 and 110 homes on the property are still leased to military personnel, until 2020.

In 2016, the province sold the western portion to the three nations for $480 million. Parts of it are now leased to West Point Grey Academy, a private school, and the Vancouver Park Board, which operates Jericho Hill Centre, part of the West Point Grey Community Centre.

The return of the lands to the First Nations was a landmark deal, arrived at after the three nations and the Lil’wat Nation served as the four host nations of the 2010 Olympics.

“There was a turbulent time in Canadian history where we were removed from our territories and removed from our homes and communities,” Khelsilem said. “Due to the constant struggle of our leaders and our people, we were able to achieve a greater success for our people to feel like we can achieve the goals and aspirations that our ancestors wanted for us.”

He said the kinship between the three nations has always been there.

“There were times when our communities were going through a lot of grieving, a lot of challenges and a lot of hardships and it was our neighbours who would come and support us,” he said. “We’re all related and connected and it feels nice to get together with your family sometimes to celebrate the things that you can do together that you can’t do on your own.”

Like Sparrow and Thomas, Khelsilem promised the three nations will do this project right.

“For us and our communities the return of these lands is monumental and historic, but the next part of this journey and this story is to do the next historic thing, which is to build a community here that is inclusive and progressive and that achieves all of the values that have sustained us for thousands of years,” Khelsilem said. When MST Development Corporation — the company that is shared by the three Nations — does a development, we do it like nobody else does and we’re very proud of that.”

The three nations and CLC are also developing the Heather Lands, a 21-acre site between 33rd and 37th Avenues at Heather Street.

Reconciliation is a key goal of the project

In describing the lands, Stewart talked about Spanish Banks, which he said is he and his wife’s favourite place in the city.

“We come to walk when there is low tide and I can’t help thinking that if you were one person standing there for the last 10,000 years, what would you have seen rolling in the shores? I think there were some very beautiful days there, but also some very sad days,” Stewart said. “This is a great day when the communities are coming together to take our city to a place where it needs to go. It’s not only good for our city, it’s good for the whole country.”

The site's design will be welcoming and inclusive of all people and use Indigenous principles in the project’s landscapes, art, public areas and building designs, the city says in its information materials.

Sustainability is also important, with reducing greenhouse gas emissions and waste and building energy efficient buildings among the goals. Transportation is also key, with the possible Broadway Subway extension to the University of British Columbia likely to pass very close by the development. The city says the six-station extension of the Millennium Line to Arbutus is approved and funded and should be complete in 2025. The extension to UBC is still being considered, but may have a station near the Jericho Lands.

Bob Howald, executive vice-president of the Canada Lands Company, a federal Crown corporation that specializes in real estate, said the development will recognize the cultural significance of the lands and will include “authentic and robust public engagement.”

A ‘transformative opportunity’ exists with this site, MP says

The lands are one of the last large urban sites available for development in the entire country, said Vancouver Quadra Member of Parliament Joyce Murray.

“It has an important historic role, including as the defence base during the past world wars and its prior history serving Indigenous communities. Precontact, it was home to a rich and thriving set of communities that depended on it. It’s an amazingly beautiful setting.”

Gil Kelley, the general manager of planning for the City of Vancouver, said he was humbled to think about how much had happened on the lands in the past.

“Captain Vancouver’s arrival in the Vancouver area was just down here on the shoreline. What a disruptive influence that had in the period of history that we’re considering — both powerful and painful — and what the opportunity here that is so humbling represents for all of us I think, which is to envision a future that is both about healing and about envisioning a place where we can all come together,” Kelly said.

The consultation kicked off Saturday, with a call by Stewart to spread the word, so the city gets as much information from community members as possible. There will be a speaker series and site walks in the next few months and the policy statement will go before council in 2021. To have your say, fill in the online survey.