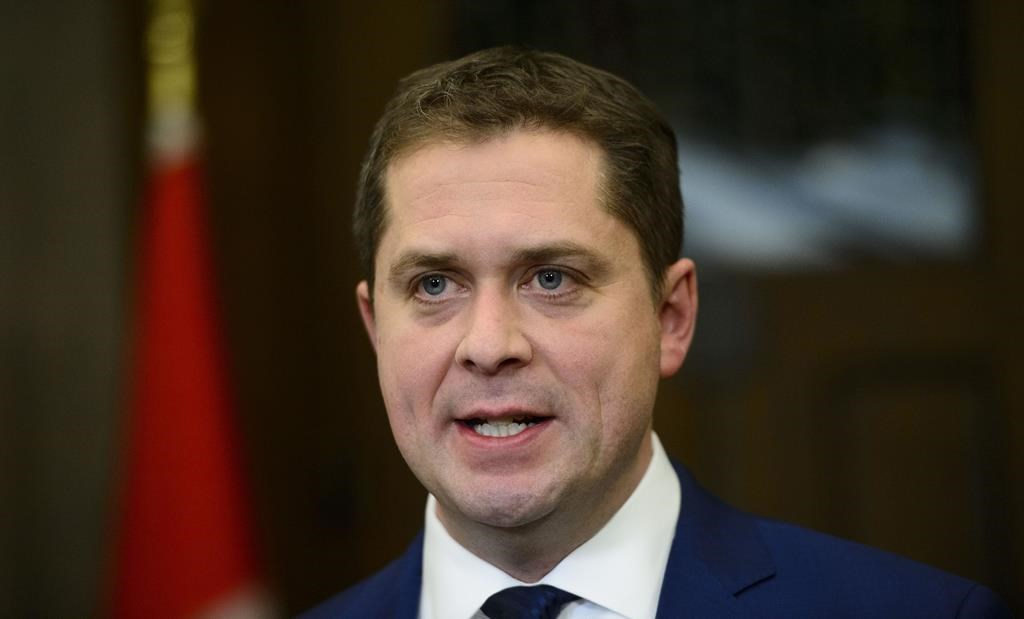 Conservative Leader Andrew Scheer holds a press conference in Ottawa on Wednesday, Feb. 27, 2019. Scheer is promising to remove the GST from Canadians' home heating bills as part of an early election campaign commitment. File photo by The Canadian Press
Previous story
Next story

If elected in the October federal election, Scheer says he would offer rebates to Canadians for the five per cent tax charged on all residential home energy, including heating oil, electricity, natural gas, propane, wood pellets and other heating sources.

Scheer estimates this could save Canadians an average of $107 per year.

The rebate would be capped at a maximum of $200 per household and would not be available for commercial energy costs.

The heating bills for investment properties would also not be eligible.

People who live in provinces that have harmonized provincial and federal sales taxes would get the same rebate.

"Heating your home in winter isn't a luxury for Canadians. It is a necessity," Scheer said. "We don't tax other basic necessities like groceries and we shouldn't be taxing home heating."

The Conservatives estimate the measure would cost the federal treasury $1.6 billion.

Scheer's promise comes as Prime Minister Justin Trudeau has launched a campaign — complete with a series of Liberal party ads — aimed at drawing the public's attention to his carbon-pricing plan and how money raised from his imminent carbon tax will be rebated directly to residents of the four provinces that have no equivalent measures of their own.

The Trudeau government is requiring provinces to impose a price on carbon emissions, starting at $20 per tonne this year and rising by $10 per tonne annually until it hits $50 in 2022. Ottawa is imposing its own tax on Ontario, Saskatchewan, Manitoba and New Brunswick, as they continue to refuse to impose their own carbon pricing plan that meets federal targets.

Scheer has been a vocal opponent of the carbon tax and said the sales-tax cut would come along with scrapping the carbon tax if he becomes prime minister.

Encouraging byelection result has Greens hoping for a breakthrough in Quebec

This seems so typical of the

This seems so typical of the best Conservative thought these days. Trot out little, disconnected ideas, with no overall theme, with the only purpose of buying votes with taxpayer money. This does nothing for Canada's future, puts a few dollars in pockets, and probably spends more administratively than the total amount that Canadians will receive. So, in the end, for very $1 someone gets, the government's cost in lost taxes and administrative overhead, will be about $2. THIS is the best Conservative thought we have? Come on. Do better.

You don't understand. Sure,

You don't understand. Sure, it's all that stuff--but it's also a carbon anti-tax. It's a gift to the natural gas and fracking sector, who will be insulated from non-emitting competition and will have room to bump prices. It is, basically, an attempt to go above and beyond "market forces" in blocking any transition to clean energy.

Well, I'll admit that's not quite true. It doesn't block competition from simple substitution of, say, electric heating for natural gas heating. But most environmentally sound alternatives involve making homes require less heating in the first place, and/or things like heat pumps. Both of those involve paying little for heat on an ongoing basis, but having bigger up-front costs to install. Since Scheer's deal is to cut the GST on payment for ongoing heating, it makes inefficient solutions where you just pay for lots of heat cheaper relative to solutions that boost efficiency by spending more in capital costs to reduce how much heat you need to pay for.
What we need is the opposite--government help to refit homes and other buildings for efficiency, alleviating up-front costs to make transition to electricity, heat pumps and whatnot easier and the ongoing savings from using less energy more attractive. That was one of Jack Layton's signature policies.

Please explain the benefit of

Please explain the benefit of Mr. Trudeau's promise to give big oil and gas rebates, forgiveness of carbon taxes and so on only to put those same taxes on the backs of taxpayers doing their level best to keep up with their heating, housing food and transportation costs.
So far the most prominent complaint against Scheer by Liberal voters is his dimples. It's a very sad statement from Liberals showing the shallowness of those who voted for a book by its' cover....and now he's come back to haunt all of us.

I could understand the tax

I could understand the tax reduction on heat-energy cost if it would be associated and inconjunctions with the installation of energy-saving/clean energy producing appliances like heat-pumps, solar panels, small windmills etc. But as a cost relieve on any energy consumption will invite a greater consumption and will increase our GHG Emmissions.

This sounds like a conspiracy by the oil industry to encourage people to burn more fossil fuels. It certainly is a financial punishment to me as I live a fossil fuel free (zero carbon) lifestyle with solar, batteries, and a ground source heat pump for heating/cooling, hot water, appliances, lights, Electric Vehicle charging. I would not get any of the largess from government so would be penalized for being off fossil fuels. Clearly a move by big Oil to teach me a lesson. .