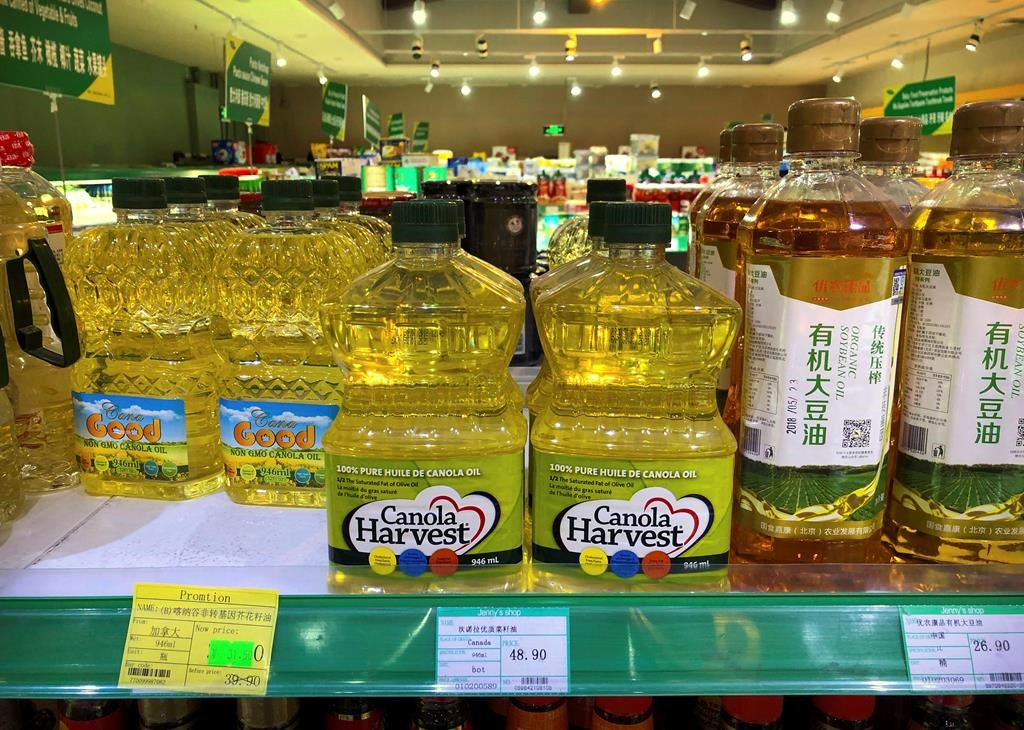 Bottles of Canola Harvest brand canola oil, manufactured by Canadian agribusiness firm Richardson International, are seen on the shelf of a grocery store in Beijing, on Wednesday, March 6, 2019. Photo by The Associated Press/Mark Schiefelbein
Previous story
Next story

Canola prices have taken a hit in the wake of China's decision to block certain Canadian imports, a move that has created a logistical headache for exporters reliant on the key overseas market.

China's foreign ministry said Wednesday that it is blocking imports from Richardson International Ltd. — one of Canada's largest grain producers — due to fears of insect infestation, a day after the company confirmed its import permit had been revoked.

Some have suggested the block may be the latest swipe against the Canadian government for arresting a top Chinese tech executive.

"We've seen a huge drop off in canola prices, especially over the past couple of weeks," said Bruce Burnett, director of weather and markets at Glacier FarmMedia.

He called it a major drop for the commodity, which likely wouldn't have happened without the backdrop of a deteriorating relationship between China and Canada. The fallout follows the arrest of Chinese tech giant Huawei CFO Meng Wanzhou in Vancouver on Dec. 1, 2018.

On Dec. 3, the May futures contract, which he noted was not the most actively traded at the time, closed at $496 per tonne. Wednesday afternoon, it was trading at about $456 — a roughly eight per cent drop. Exports to China had previously been expected to remain strong through most of the crop year, he said, with fairly solid prices.

Canada supplies about 40 per cent of China's canola imports. Canada exported about $3.6 billion worth of canola seed, oil and meal to China in 2017, according to the Canola Council of Canada's most recent figures.

The two countries have generally had a good relationship, said Brian Innes, vice-president of public affairs for the council, with Canada sending a stable supply of a high-quality product to feed growing Chinese demand, in part to feed its livestock. But issues like this latest permit revocation arise from time to time, he said.

"It's a concern for the whole industry because it injects uncertainty into the market," said Innes.

That sentiment makes it difficult for everyone in the supply chain and industry to make decisions as they're thinking about the future, he said. Farmers, for example, would be concerned about when they'll sell their current canola stores and what they'll grow in the upcoming season.

"So, all members of the canola value chain are paying very close attention because China's a very important market for Canada."

Now that China has blocked Richardson's shipments, the question becomes: what will happen to other companies, Burnett said.

It's possible others could have their permits revoked. But, unlike Winnipeg-based Richardson, other players in Canada tend to be part of large multinational organizations. Regina-based Viterra Inc., for example, is part of Switzerland-based Glencore International.

While it's hard to gauge what the Chinese government is thinking, it's likely these companies will be very cautious, he said.

"There's large amounts of money involved here that the companies will be very wary of shipping cargoes that could be rejected or that type of thing."

They could try to turn to other markets that import Canadian canola, said Burnett, such as parts of Southeast Asia.

"Can they wholly replace the demand that China represents?" he said. "That's probably a hard thing to happen."

Al Mussel, research lead and founder of Agri-Food Economic Systems Inc., said it's a convenient time for China to decrease the amount of canola it imports because the country is grappling with an outbreak of African Swine Fever, a fatal disease that targets pigs.

That means China doesn't need as much canola to feed its pig herd, said Mussell, adding that some estimate the country will drop its pork production by up to 20 per cent this year.

Rick White, CEO of the Canadian Canola Growers Association, said the lower commodity price and blockage of some exports could have a detrimental impact on farmers.

He was hopeful the two countries will work out a solution within a month or so, before the situation creates long-term effects such as farmers growing less canola or locking in this year's crop at the current low price.

"We are calling on Ottawa to stop its navel-gazing about its internal controversies and fight back," she said, adding Alberta farmers and workers could lose hundreds of millions of dollars and up to 3,000 jobs if the issue is not resolved.

Foreign Affairs Minister Chrystia Freeland expressed concern about the situation on Tuesday and said the government is "working very, very hard with the Chinese government on this issue."