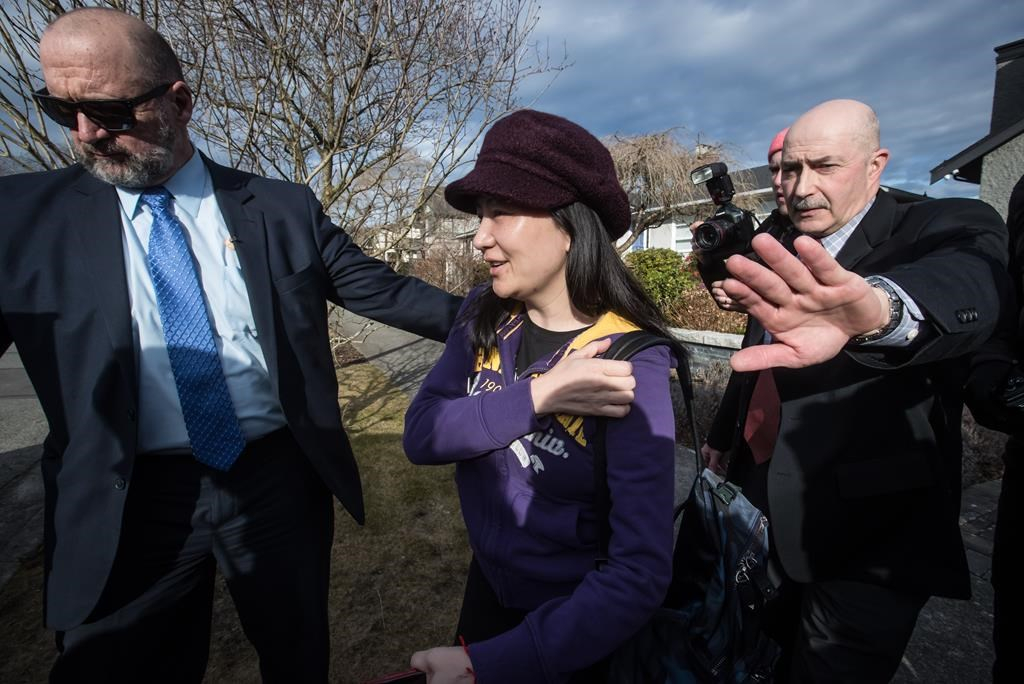 Huawei chief financial officer Meng Wanzhou is accompanied by a private security detail as she leaves her home to attend a court appearance in Vancouver, on Mar. 6, 2019. Photo by The Canadian Press/Darryl Dyck
Previous story
Next story

A request by the United States to extradite the chief financial officer of China's Huawei Technologies raises serious concerns about political motivations and will take time to unfold, a defence lawyer says.

Meng Wanzhou was arrested in December at Vancouver's airport at the request of U.S. authorities, sparking outrage from China. Canada announced last week it intends to proceed with the extradition case.

"This is a rare case in the extradition context, if not unique," Richard Peck told a judge in British Columbia Supreme Court on Wednesday. "There are serious concerns of a legal and factual nature that arise, concerns not common in the extradition jurisprudence

"There are concerns involving the political character of the motivations, comments by the U.S. president ... There are issues arising out of the treatment of Ms. Meng on her arrival at the Vancouver International Airport and her detention and subsequent arrest."

U.S. President Donald Trump has said he'd intervene in the case if it would help secure a trade deal with Beijing. Prime Minister Justin Trudeau has maintained Canada is following the rule of law.

Meng's defence team has also filed a lawsuit against members of the Canada Border Services Agency, the federal government and the RCMP, accusing officers of violating her rights by detaining and questioning her for three hours before she was notified of her arrest. No statements of defence have been filed in the lawsuit and none of the allegations has been tested in court.

Peck told the judge it will take time to properly develop all the issues involved in the "complex" case. The defence and Crown agreed to put it over until May 8 to fix dates for upcoming hearings.

Abuse of process motions will likely be brought and the defence has also filed access to information requests with the border services agency and the RCMP, Peck said. Both agencies have missed deadlines to provide information, and the defence team is now pursuing complaints with the privacy commissioner, he added.

John Gibb-Carsley, the prosecutor representing the Attorney General of Canada, said over the coming weeks the Crown and the defence will discuss the scheduling of the applications that need to be brought forward.

The U.S. Department of Justice has laid out 13 criminal counts of conspiracy, fraud and obstruction against Huawei and Meng, who is the daughter of company founder Ren Zhengfei. The indictment accuses Huawei and Meng of misrepresenting their ownership of a Hong Kong-based subsidiary between 2007 and 2017 in an effort to circumvent U.S. sanctions against Iran.

Both Meng and the company have denied any wrongdoing and the case has set off a diplomatic furor, with China's embassy calling it a "political persecution."

After Meng's arrest, two Canadians were detained by Beijing and Chinese state media said this week they face allegations of spying.

One of Canada's largest grain processors has also been blocked from exporting canola to China due to fears of insect infestation, although some analysts tie the decision to the Meng case and Foreign Affairs Minister Chrystia Freeland is following up with the Chinese government.

Meng has been under house arrest since mid-December at one of her two multimillion-dollar Vancouver homes. As she waited for her brief hearing to begin Wednesday, she chatted and laughed with her lawyer and interpreter.

Outside the courthouse, protesters gathered to support Meng while others criticized the Chinese government and called for the release of the two detained Canadians, entrepreneur Michael Spavor and former diplomat Michael Kovrig.

Kuang Yang burned a small Chinese flag and said through a translator that he opposes the Communist government using the two detained Canadians as "political pawns."

"The Chinese government is prosecuting ... the two Canadians as retaliation to Canada, but Canada is just doing its due process to extradite Meng to the U.S. to get a fair trial," he said.

Richard Kurland, a Vancouver immigration lawyer who attended the hearing on Wednesday, said outside court he expects the litigation to take five to eight years.

It's also possible the case will disappear if Trump gets a satisfactory trade deal with Beijing, he said.

"This is a highly politicized case. The president has made no secret of using the extradition case as a trade negotiation case, which poisons the extradition process from my view."

Detained in China: The Trials of Kun Huang