The most troubling aspect of the pro-pipeline rally 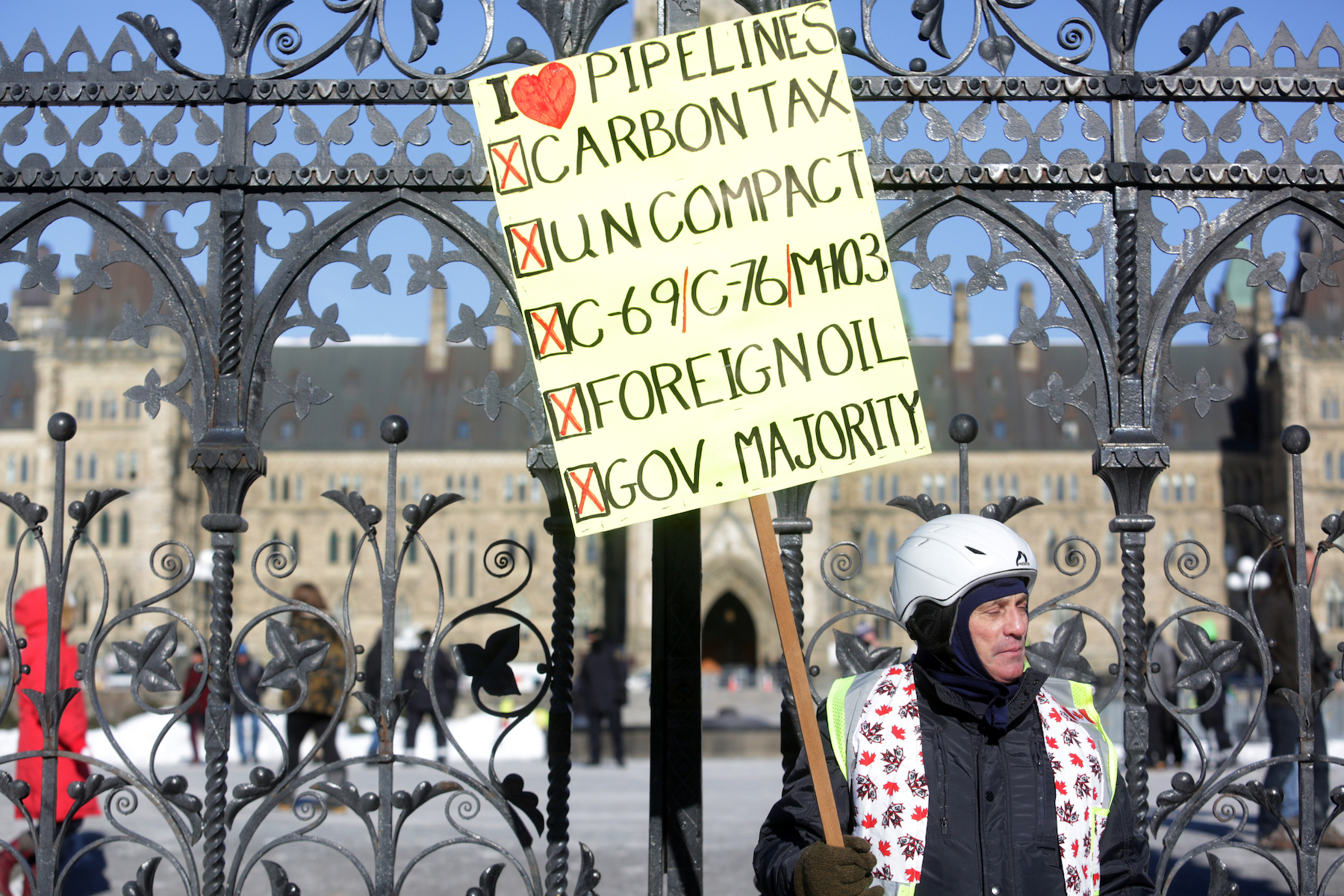 A protestor holds a sign on Parliament Hill in Ottawa on February 19, 2019. Photo by Andrew Meade
Previous story
Next story

On a recent trip to Ottawa, my wife and I visited the National Gallery to view 'Anthropocene'.

This exhibition depicts the ruination of the natural world through man's rapacious and limitless hunger for MORE. Case in point, drilling for oil, bitumen extraction and gas fracking are powerful sources of energy. However, the overall consequences of these extractive activities are among the preeminent contributors to the worst aspects of global warming. It is almost impossible not to feel despair for humanity's future after experiencing this haunting exhibition.

During that same trip, a caravan of vehicles festooned with slogans such as "we love gas and oil" arrived on Parliament Hill on February 19th comprised of about 70 vehicles and 150 participants, considerably less than an overwhelming presence. Their demand ... more pipelines to ship even greater amounts of dilbit (diluted bitumen) to tidewater. More pipelines, ever greater amounts of bitumen extraction from northern Alberta, significantly expanded despoilment of limited water reserves ending up in ever more enormous tailing ponds of lethal chemical toxins that will someday rupture ... everything 'Anthropocene' tragically depicts.

Consider these few facts. The present ‘sky is falling’ rhetoric, absent applying a critical analysis lens, would have people believing that Alberta oil production has been halted. However, production levels (even with the slowdown) are approximately 3.3 million barrels a day. There are approximately 210,000 inactive, abandoned and orphaned wells in Western Canada, with the lion’s share in Alberta. The enormous cleanup task remains in limbo. Industrywide, the AER pegs total liabilities at about $58.7-billion. However, documents made public by the regulator say the industry’s ultimate cleanup bill for everything from pipelines to tailings pits could swell to $260-billion. Meanwhile, oil and gas corporations have only offered up $1.6 billion.

For or against pipeline expansion, the most troubling aspect of the pro-pipeline rally was the brutish message generated by the significant numbers of ‘yellow vest’ participants. There were unabashed displays of hate speech, anti-immigrant sentiment and “treason” signage. One well-known white supremacist shouted at Indigenous counter-protesters "If you don't like our country, leave it". Ironically, media reports on this seemed scant considering the pronounced presence of such dangerous spewing.

Andrew Scheer attended this rally and was seen at one point standing next to a billboard calling for Prime Minister Justin Trudeau to be "tried for treason". He proudly stated "we are fighting for you, we are standing with you." He made no effort to decry the vitriolic anti-immigrant, white supremacist, white nationalist language being brandished about by many of those assembled. Was Mr Scheer’s silence a signal of acceptance of this hate rhetoric and a welcoming of same into his party?

Being Canadian generally means being open, welcoming, fair and respectful of others. So for a rally on pipelines to descend into a litany of vitriolic and hateful attacks on a wide swath of others was extremely chilling. For Mr Scheer to not call out these remarks and simply allow them to stand was highly disturbing.

Canada will need to rely on carbon-based energy for some time to come. However the days of repeated Wild West boom and bust, ‘drill, baby, drill’ then walking away with impunity, leaving the despoilment cleanup to the state must end. The federal and provincial governments must begin to hold oil and gas companies legally responsible for land reclamation costs. Both need to make a more concerted effort to shift their focus to financial and long-term planning support for renewables. Through these initiatives, legions of well-paying jobs can be created to support the renewal of Alberta's natural environment. No more kicking the can down the road.

We need political leadership that shows respect for, but halts kowtowing to, big oil and gas interests. We need leaders that firmly speak out when energy issues become the cover for hate-based falsehoods, mistruths and hooligan-like denunciation of any opposing commentary including the truth itself. To pander to the dark underbelly of roiled fears and engineered hatred of the other is a downward spiral that ends very badly for all. Canada needs to prudently and thoughtfully move forward. Change is difficult, however wallowing in a ‘good old days’ mindset only impedes the development of a progressive 21st century vision of prosperity for all Canadians.

Being Canadian generally means being open, welcoming, fair and respectful of others, so for a rally on pipelines to descend into a litany of vitriolic and hateful attacks on a wide swath of others was extremely chilling.

Thank you for your well

Thank you for your well-considered opinion, Mr. Sanderson. I believe your views resonate with many many Canadians across the country.