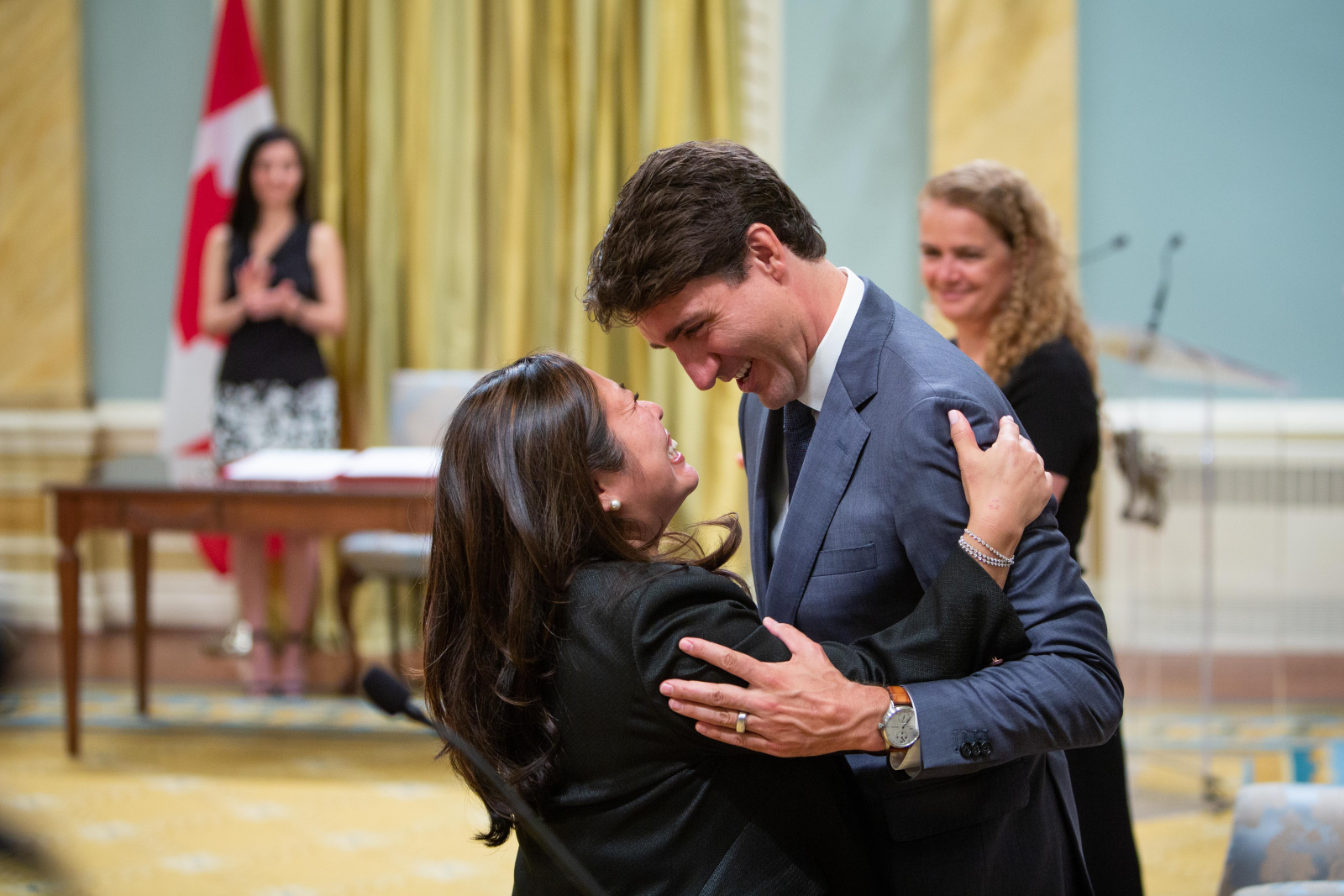 Mary Ng, Member of Parliament for Markham, becomes Minister of Small Business and Export Promotion during swearing in ceremony for new ministers after summer shuffle at Rideau Hall in Ottawa, on July 18th, 2018. File photo by Alex Tetreault
Previous story
Next story

Haneen Abu-Remaileh is co-founder and CEO of Locumunity. Since 2016, her business has worked to streamline healthcare recruitment by directly connecting job-seeking physicians with healthcare facilities.

“I was trying to solve a healthcare issue through technology, so that’s how my journey ended up in entrepreneurship," said Abu-Remaileh, who is also a physician. "I don’t come from a business background. It was a steep learning curve.”

Abu-Remaileh pieced her entrepreneurship education together through mentors and accelerator programs. She applied for a grant under Ottawa’s $20-million Women Entrepreneurship Fund, but she recently learned her business was deemed ineligible because it was less than two years old at the time.

“When the minimal viable product was out there, there was some traction. It wasn’t just a sketch on a napkin. But I found that early-stage funding is generally lacking in Canada,” Abu-Remaileh told National Observer in an interview. “That’s what sent us down to the States. An accelerator was willing to invest $120,000 USD for six per cent of the company, plus give us access to their network.”

Her situation highlights a challenge faced by women in business that the Trudeau government is attempting to address as part of a $2-billion strategy Introduced in the 2018 federal budget.

The new strategy aims to support women in entrepreneurship and double the number of women who own businesses in Canada by 2025. According to StatCan, there are around 309,000 women-owned small and medium-sized enterprises in Canada. Men are majority owners in over a million enterprises.

“I think [Canada has] made major headway with this new investment,” she added. “There just needs to be further assessment into how we can make investment available to earlier-stage companies.”

Abu-Remaileh made the comments following a panel discussion on Thursday about women in business and tech. The discussion was moderated by federal Small Business and Export Promotion Minister Mary Ng.

The event was staged to coincide with an announcement on Friday, International Women's Day, as the Trudeau government unveiled the first 15 recipients of direct funding to women-owned and led companies, as part of Ottawa’s Women Entrepreneurship Strategy. The government says that some 200 businesses will receive funding through the program through announcements made in other local communities over the next month.

The funding would provide $100,000 for each business to be distributed over the next two years.

“While 99 per cent of our businesses in Canada are small and medium-sized, only 16 per cent are women-owned and women-led. Something needs to be done,” said Ng during an interview with National Observer.

Alongside the $20 million fund, the 2018 budget allocated $85 million over the next five years to create “ecosystems” for women entrepreneurs — an approach that seeks to support women across the entrepreneurship landscape, from direct financial investment, debt financing, and inclusive procurement to networking and mentorship programs.

“That mix and funding different elements that are solving different barriers is a really unique approach,” said Vicki Saunders, founder of the Toronto-based non-profit SheEO. “It’s the beginning, I hope, of a multi-year strategy.”

SheEO operates on the principle of “radical generosity” to fund women-led ventures in Canada, the U.S., New Zealand, and Australia. Every year, the initiative brings together 500 women, who each contribute $1,100 to a pool that’s loaned out at zero per cent interest. After being paid back over five years, the money is loaned again. Their goal is to reach 10,000 women-led ventures and a $1 billion perpetual fund to support future generations of women entrepreneurs.

Saunders estimated that every one of SheEO's Canadian ventures also applied for the WES Ecosystem Fund.

Lack of gender parity a “massive loss to the economy”

SheEO’s model is designed to address one of the most significant barriers for women entrepreneurs — access to capital for starting and growing a business in the early stages.

“We’ve heard over and over again [about] the lack of available capital to help small and medium-sized companies start and scale,” Minister Ng said.

“Women are twice as likely to be turned down for capital,” she added.

Research showed that when men and women delivered the exact pitch for funding (identical word-for-word), men got funded 68% while women only 32%, according to Minister of Small Biz @mary_ng. I’m grateful the gov is investing in women and we need to do more! #SheEOSummitCan

According to Saunders, female entrepreneurs receive less than four per cent of funding that’s doled out, including venture capital and loans.

“There’s a massive loss to the economy by not having gender parity in this space,” she said.

“We know that women are highly capital efficient. They get to profitability really quickly. They will use that $100,000 (from the WES Ecosystem Fund) to hire people, create more connective tissue in their local community, and build sustainable solutions for challenges we’re facing.”

In addition to direct federal investment in the women-led businesses, the Business Development Bank of Canada (BDC) has increased its lending to women, setting a target of $1.4 billion in lending by 2021. A total of $200 million will go to technology ventures specifically. The Business Women in International Trade Program aims to help women-led businesses reach new export markets, while Ottawa has committed to boosting its own procurement from companies led by women.

A new national Women Entrepreneurship Knowledge Hub will also serve as a “one-stop source of knowledge, data and best practices for women entrepreneurs," as part of the federal funding.

Vancouver is a regional hub in this network.

A 2017 report by the McKinsey Global Institute estimated that by 2026, empowering women in Canada’s economy could boost incremental GDP by $150 billion. According to McKinsey, that amounts to a 0.6 per cent increase to GDP growth annually — six per cent higher than “business-as-usual” GDP forecasts over the next ten years.

"So those are some of the ways that our social policies are complementing our financial investments," Ng told National Observer. "We are providing the support in a way that allows us to collaborate respectfully, so that we are continuing to work towards a reconciliation for our Indigenous people.”

“I’ve pitched with myself alone and then with my male co-founder, and I’ve seen the questions change,” she said. “We’re pitching the exact same vision ... but I was always put on the defensive. I think it comes unconsciously, but the bias is there.”

Great to be among so many talented women on the eve of International Women's Day to discuss women in tech and the economy. #IDW2019 pic.twitter.com/RhUhutNsne

However, in 2009, the auditor general reported that GBA+ had very little influence on decision-making across the country. A subsequent report found that between 2009 and 2013, just 25 of 110 federal departments and agencies formally committed to implementing the government-wide action plan on gender-based analysis. The federal government renewed its commitment to GBA+ in 2015 and is working to identify barriers to its implementation.

Prime Minister Justin Trudeau made headlines when he unveiled his first cabinet and explained that it had an equal number of women and men "because it's 2015."

That is is no longer the case after Jane Philpott’s resignation on March 4 as president of the Treasury Board.

Ng had limited time for her interview with National Observer and the conversation ended before the minister could take questions about the controversy surrounding the departures of Philpott and Jody Wilson-Raybould from Trudeau's cabinet.

However, in a separate interview with the Canadian Press, Minister Ng expressed her disappointment that Philpott and Wilson-Raybould left their cabinet posts, but maintained their resignations have no bearing on the government’s commitment to feminism.

“The work that we are doing as a cabinet and as government, particularly for women, is extraordinary,” Minister Ng told the Canadian Press.

Justin does believe our tax

Justin does believe our tax funds grow on trees. Has there ever been a PM that was so fiscally irresponsible? Our great grand kids will still be paying off debt accrued by this man. A billion here...a billion there.....it's only confetti.