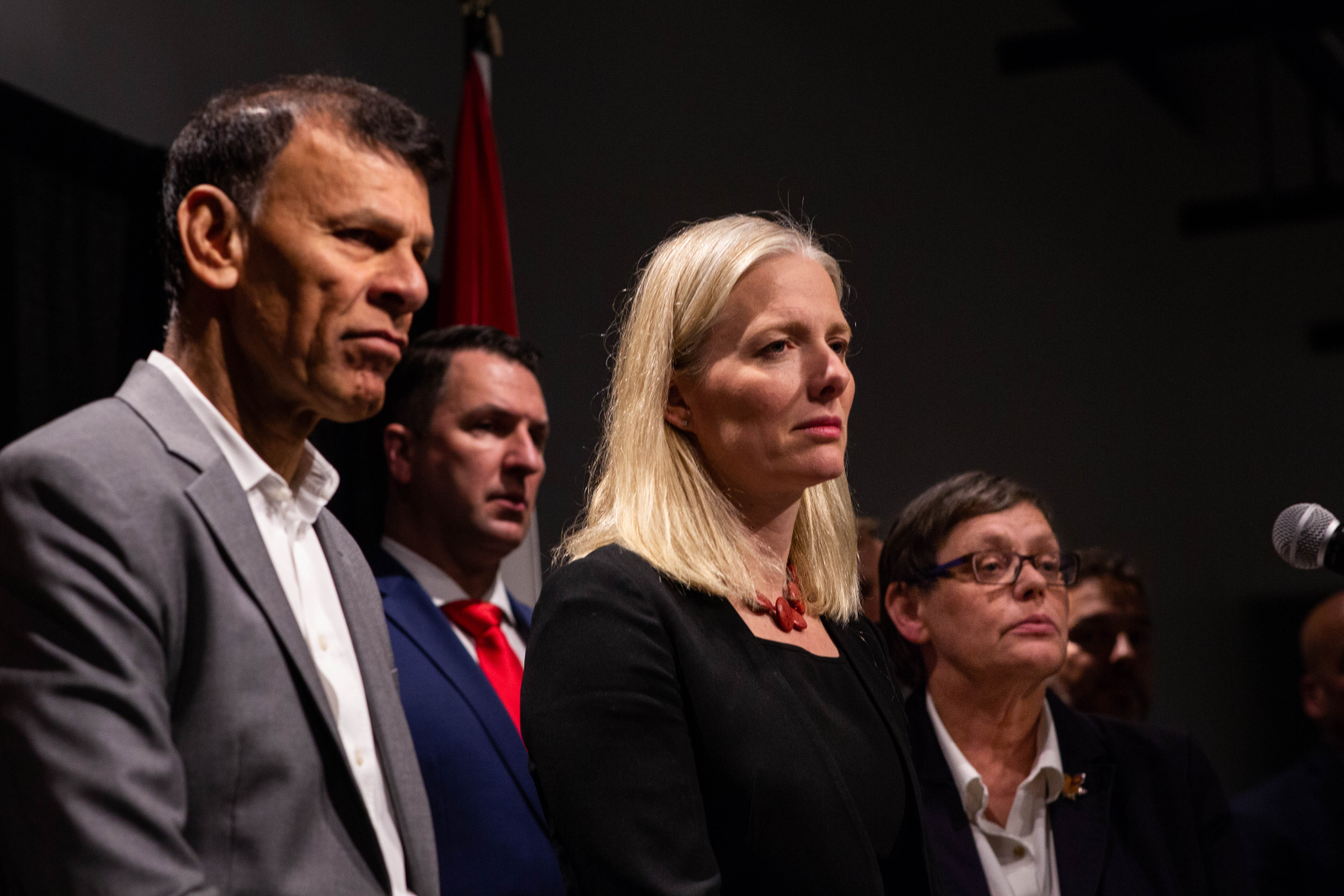 There is mistrust and suspicion of government intentions. There are fears about devastating impacts to communities. There's anxiety over whether officials can deliver on promises. And there's frustration with being disparaged as dirty.

These are some of the stark assessments from the thousands of workers in coal mines and coal-fired power plants across Canada that were captured by 11 experts appointed by the government almost a year ago.

The special task force was launched by Environment and Climate Change Minister Catherine McKenna on April 25, 2018 to investigate how to fairly provide for these workers as their livelihoods are taken offline over the next decade.

They delivered their findings in a 41-page report that recommends federal spending “well into the hundreds of millions of dollars” on a long list of new infrastructure, financial and jobs programs, employment training and other solutions.

As part of its research, the Task Force on Just Transition for Canadian Coal Power Workers and Communities toured seven facilities, visited over a dozen communities and met with workers and others across the four provinces where coal power is still used: Alberta, Saskatchewan, New Brunswick and Nova Scotia.

Their recommendations include a "pension bridging program" for workers who will retire earlier than planned due to the phase-out. This program would provide a “financial bridge to retirement without compromising workers’ earnings and retirement benefits," the report stated.

They are also recommending a jobs program to provide affected workers with employment insurance benefits of up to 75 per cent of income for two years, and wage top-ups of up to 90 per cent of previously-earned income for up to two years for workers that get lower-wage jobs.

Other recommendations include funding for continuing private healthcare coverage, for education and skills building and to offset the expense of travel or relocating for new employment.

In a statement issued Monday afternoon, McKenna thanked the task force and said she was reviewing its conclusions. “Phasing out coal is a necessary step to ensure the health of Canadians and the protection of our environment," she said.

"At the same time, the government of Canada needs to support workers, families, and communities who rely on coal through this transition. Canadians are at the centre of Canada’s climate policies, which is why the work of the task force is critical to ensure a successful transition."

Following a similar announcement in Alberta in 2015, and the closing of all coal plants in Ontario in 2014, the Trudeau government said in 2016 it was moving to eliminate coal power nationwide by 2030.

Canada put new regulations into effect in December 2018 that raised standards on the 15 coal plants still operating, to the point that almost all cannot continue. Plants must either close, convert to other fuel sources like natural gas or capture their pollution like the Boundary Dam plant in Saskatchewan.

Coal plants produce significant amounts of air pollutants like sulphur dioxides and mercury, create acid rain and smog and raise the risk of asthma. Burning coal is also one of the largest sources of carbon pollution that leads to climate change.

But phasing them out will have significant effects on nearly 50 communities that have nearby generating stations or coal mines that supply them. Not only will roughly 4,000 workers be directly affected, the towns and businesses that have come to rely on them will also take a hit.

A significant portion of the workforce is over the age of 50, the task force found, with many in the second or third generation in their family to work in the industry. Older workers feel vulnerable in the job market, “often having not applied for a new job in decades.” Many are “frustrated that the coal sector is not only being phased out but also disparaged as ‘dirty.’”

Previous industry closures that led to sudden or unexpected job losses have left emotional scars, and many believed they were making a responsible decision to work in the coal industry because electricity generation is seen as stable, long-term employment. As a result, workers, families and communities are worried that without careful planning, “ they may face devastating impacts” again.

“Coal workers and community members have many questions about when, if, and how the coal transition will affect them personally as well as professionally. Furthermore, many expressed sincere doubt about the ability of government to support them through a transition, and mistrust of government’s intentions and capabilities,” reads the report.

“Given worker and community suspicion of government, some representatives called for ongoing external oversight and advice. A lack of confidence, given past transition failures, is driving anxiety and fears that the government will not deliver on just transition.”

The task force wasn't asked to examine a potential transition in Canada's oil and gas sector — an industry that would also be expected to shrink dramatically if the world succeeds at preventing the worst impacts of climate change, according to the International Energy Agency.

The Trudeau government has not yet announced any transition plans for Canada's oilpatch.

The government’s 2018 initial commitment of $35 million to kick-start the coal phase-out “should be the beginning of a longer plan,” the group concluded in their report.

“Based on what we heard, the direct and indirect costs of the phase-out will stretch well into the hundreds of millions of dollars and the timeframe will go beyond 2030,” they wrote.

“While there are opportunities to re-prioritize, reallocate and dedicate some existing funding, including for infrastructure, achieving a just transition will require additional and more substantial investments in Budget 2019 and budgets thereafter.”

Lois Corbett, executive director of the Conservation Council of New Brunswick and a co-chair of the task force, said in an interview that the group avoided publishing an overall dollar figure, because they found every community was facing unique challenges and would have to develop customized strategies.

“For the task force to say, ‘Here’s your recipe, get out and bake your pie,’ would have been the wrong thing to do,” said Corbett, who chaired the task force alongside Canadian Labour Congress President Hassan Yussuff.

“It’s very hard to say — and in fact we’re quite deliberate — in not coming up with a one-size-fits-all approach.”

She said she had “confidence” that there will be some new financing for the coal phase-out in this year’s federal budget, due to be unveiled March 19. “Like most of us watching the federal budget, we’re in that wait-and-see place.”

Ottawa is already investing billions of dollars to mitigate and adapt to climate change, the task force noted.

“If the government is strategic with these existing funds and commits to new support extended over the several years of transition planning, affected workers will see new economic opportunities in their communities that can employ and sustain them, their families, and their neighbours for years to come.”

One of the central concerns heard by the task force was that workers are unable to plan for their futures due to a lack of details about potential support from the government. Timely and accurate information helps reduce anxiety, they said, and gives workers confidence when they make decisions affecting their families.

“I think one of the points that hopefully comes across in our advice to the federal government, is that it’s much better to plan for the transition than have it thrust upon you,” Corbett said.

The task force said it learned that locally-run transition centres are an important resource, serving as a hub where information on re-employment and skills training can be shared, connections can be made and education and financial services offered.

One of the group’s recommendations is for Ottawa to work with “provinces, municipalities, regional organizations, employers, and unions” to establish these centres before job losses kick in, and keep them open at least two years after the phase-out.

The group also recommended including provisions related to the coal phase-out in federal-provincial agreements, such as equivalency deals under the Canadian Environmental Protection Act, as well as bilateral labour and infrastructure agreements.

Failure to do this, the group noted, would put climate action in jeopardy. This warning comes at a time when the federal government is rolling out a suite of policies to address climate change.

These include the introduction of a standard that would make individual Canadians and businesses pay for carbon pollution, combined with regulations that would require them to use cleaner fuels, as well as regulations requiring the oil and gas industry to measure and reduce their methane pollution.

The oil and gas industry in Alberta has also suffered tens of thousands of job losses due to fluctuating prices and a global market that is gradually moving towards energy sources with lower environmental footprints.

“Widespread support for continued climate change action is at risk of eroding if strong just transition provisions are not embedded in climate change and labour policy,” it said.

Corbett said the political element of negotiating new agreements with provinces that may not see eye-to-eye with Ottawa comes with the territory.

“Is it any different if we’re talking about new employment programs for First Nations in different parts of the country? Is it any more complicated than dealing with the transition when a fishery collapses? Is it harder on the heart when an armed forces base shuts down? I don’t think so,” she said.

The task force wants to see a lead minister assigned to oversee and report on progress, including “annual public reporting and a detailed report to Parliament every five years,” as well as a “research fund” for studying the impact of the phase out.

It also recommended a public labour market “inventory” of coal workers, with things like skills profiles, that would be a starting point for a job bank to match skill sets and employers.

“This inventory, or products based on it, would be developed in partnership with employers, unions, provinces, and municipalities, and be made available to workers, employers, transition centres, and researchers studying coal phase-out transition, while respecting privacy restrictions,” the report reads.

Let's hope there is

Let's hope there is substantive action on this file as "transitions" from resource dependence are going to be a major feature of the economy for many years to come...

This is right and just. I

This is right and just. I hope there will be a good transition for all these workers. Oil and Gas workers next. The move to sustainable energy rests on this. These are the skilled trades that will do it once we get over the fear of change.

Kudos to National Observer for publishing this. We need more reporting on how communities, workers and governments are going to manage the transition to a low carbon future.