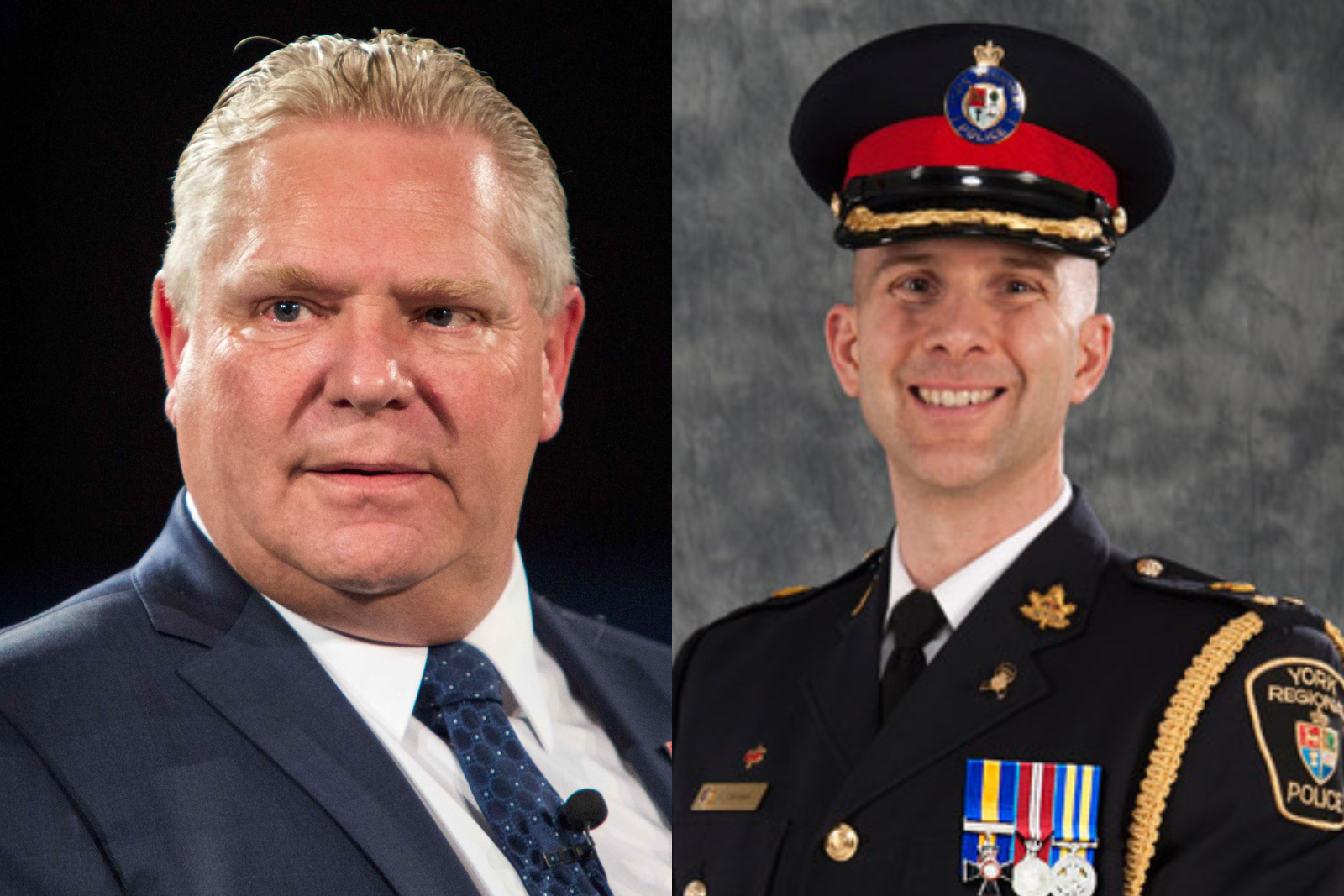 Just five days after Doug Ford's long-time friend and Toronto Police Supt. Ron Taverner, 72, withdrew his name from consideration for the province's top police job, the Ontario government has announced a new choice — one who hasn't met the premier.

Thomas Carrique, a 29-year veteran of the York Regional Police, which covers municipalities just north of Toronto to the southern border of Lake Simcoe, will take the helm at the Ontario Provincial Police (OPP) for a three-year term starting on April 8.

His hiring is intended to clear the bad blood and calm the tumult around Taverner, whose appointment led to widespread complaints of government interference in policing led by OPP deputy commissioner Brad Blair.

The government fired Blair, another candidate for the job, earlier last week after he launched a legal challenge to decide whether the province's ombudsman should be forced to investigate the alleged conflicts of interest in Taverner's appointment.

Speaking at a news conference at York Regional Police headquarters in Aurora, Ontario, where he currently serves as the force’s deputy chief, an emotional Carrique said he is “extremely honoured” to be taking the job.

"No one is more surprised than me," he told reporters Monday.

Carrique said he did not originally apply for the position, and was approached last week about taking on the job by deputy community safety minister Mario Di Tommasso.

Di Tommaso, who used to be Taverner’s boss when he served with Toronto Police, was also a member of the three-person hiring committee that appointed Taverner to the top provincial cop position.

Carrique said he and Di Tommaso had a "very lengthy and deep discussion" about policing in the province and spoke about the importance of having a "permanent, fixed leadership moving forward." (The police service has been without a permanent commissioner since Nov. 2018.)

The hasty choice was made "to move forward," Jones told reporters while standing next to Carrique, adding that the search began last week after Taverner's withdrawal.

Thomas Carrique has been appointed new @OPP Commissioner after a distinguished career w/ @YRP. Deputy Chief Carrique’s experience will be vital as the OPP tackles priorities like guns, gangs, and human smuggling. Please join me in wishing him the best! https://t.co/j2JChr4cK8

Jones said she had no discussions with Taverner prior to receiving his memo announcing his withdrawal last Wednesday. After that, "we moved decisively as a government to find an individual who would serve as the incoming commissioner and I'm very pleased with the choice," she said.

When asked about how Carrique was chosen, Jones said a number of candidates were assessed and reviewed but that she wouldn't "get in an HR discussion" about the process.

Given Blair’s complaints that the appointment process has been riddled with personal interests, reporters questioned if Carrique’s appointment was made by an independent process minus any interference from Di Tomasso or the premier.

Jones said Di Tomasso is "an excellent deputy" whom she relies on for "advice and counsel" but assured reporters that the decision was made by cabinet as a whole.

The role is a "critical one," she said and the right candidate had been chosen. "It's important for our government to show we are moving forward."

"I have no relationship whatsoever with the premier or the Ford family. I have not met the premier before," he said.

Di Tommaso and Carrique are "professional acquaintances," he said, from when they both served as inspectors on police management teams that oversaw joint operations in the Greater Toronto Area.

When asked if he would support an external investigation into Taverner's appointment, Carrique said that's not a question he should be addressing.

"I have no connection to any previous processes," he said, adding that he knew Taverner from "years of policing on a shared jurisdictional boundary."

"I have not spoken to Supt. Taverner since the initial process started to today's date," he added.

"Operationally, there is no question that the OPP remains independent," Carrique said. "There's not a direct connection between the premier of the province and the commissioner of the OPP."

"I'm accountable to the deputy minister of community safety," he said, who willl provide direction. "Save and except, there needs to be a close working relationship to ensure adequate resouces, funding and support."

Jones interjected to say "directing the police in any way is inappropriate. It always has been and always will be."

Carrique added: "In my role as deputy chief I frequently have conversations with elected officials. A conversation with an elected official or their staff is not inappropriate. We must communicate, we must have a mutual understanding of our respective roles within law and within society."

Ford should 'fully disclose the details of the new hiring process'

Opposition leaders welcomed Carrique's appointment but urged the government to be more transparent about how the decision was reached.

Green Party leader and MPP Mike Schreiner said he is "pleased" with Carrique's appointment but concerned as to how the government got here and called on the government "to fully disclose the details of the new hiring process."

"The quick replacement following Mr. Taverner’s withdrawal raises questions," Schreiner wrote in a statement. This scandal broke the trust of the public, so we need to know that a sound process was followed to arrive at Mr. Carrique, free from political interference or conflict of interest."

NDP leader Andrea Horwath said in a statement that the appoinment "does not give the public confidence Doug Ford has learned his lesson about police independence."

"In light of Doug Ford’s record on this file and the public’s lack of confidence in the integrity and transparency of the Ford government, I would expect the minister to provide a full public report on the process it followed in hiring Deputy Chief Carrique," she said.

The appointment is welcome, but does not change the fact that there are important questions still surrounding Ford’s conduct in appointing his close friend Ron Taverner, and it does not give the public confidence Ford has learned his lesson about police independence. 3…

Carrique replaces Ron Taverner, who was appointed last November after the initial job posting was lowered by two ranks to allow him to be eligible. Initially, the job posted demanded applicants have a minium rank of deputy chief, which Carrique meets.

An Order in Council was signed on March 8, 2019 to confirm his appointment by cabinet. Previously, a recruiting firm had been hired to aid the search that led to Taverner's appointment.

According to his biography on the York Regional Police website, Carrique is currently responsible for investigations and support and has previously worked in a variety of areas in the force including uniform patrol, criminal investigations, investigative services, traffic, marine, public order and the administration and operations branches.

He holds a certificate in terrorism studies from Scotland's University of St. Andrews in Scotland and is a graduate of the National Policing Improvement Agency's International Commanders Program in the United Kingdom and the United States Department of Justice Drug Unit Commanders Academy.

Moving forward, his priorities will include combating guns and gangs, illegal drugs, traffic safety and “to ensure we are doing everything in our power to rescue the victims of human trafficking and bring to justice” those who exploit them, he said.

"I will work hard each and every day to earn the trust and confidence of members of the OPP and citizens of this province."

Taverner’s appointment continues to be the focus of a conflict of interest investigation by Ontario’s integrity commissioner. Ford has repeatedly denied any involvement in the decision.

All three opposition parties have called for a public inquiry.

Editor's note: This story was updated on March 11 at 4:00 p.m. with a statement from NDP leader Andrea Horwath.