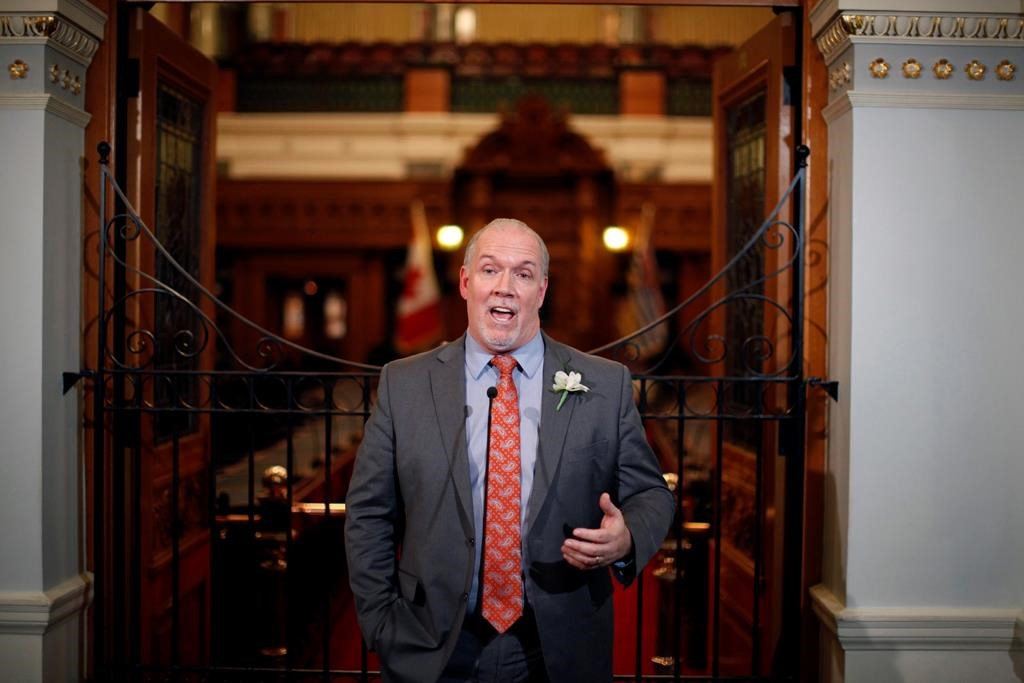 Premier John Horgan answers questions from the media during a press conference following the speech from the throne in the legislative assembly in Victoria, B.C., on Tuesday, February 12, 2019. Photo by The Canadian Press/Chad Hipolito
Previous story
Next story

The height limit for wood buildings in British Columbia is rising to 12 from six storeys in a move that Premier John Horgan expects to spur development using timber and give the province a headstart on other parts of the country.

B.C. is changing its building code to allow the construction of taller wood buildings as a safe, economic and environmental alternative to concrete apartments and office buildings, Horgan said Wednesday.

B.C.'s building code changes come one year ahead of expected changes in the national building code, which are also expected to increase height limits for wood buildings to 12 storeys, Horgan said.

"We're not waiting for the rest of the country to get here," said Horgan. "We already know that the product we're building, that we're creating here, is fire resistant. We know that we can build faster and we know it's better for the environment."

Horgan made the announcement at Structurlam, a timber production company in Okanagan Falls near Penticton that has been a North American leader in wood products used in buildings.

"We need to get more value out of every log," he said. "It's cost effective. It's environmentally sensitive and it's putting British Columbians to work with a B.C. product."

A mass timber building is one where the primary load-bearing structure is made of either solid or engineered wood. Encapsulated mass timber is where the timber components are surrounded by fire-resistant materials like drywall.

Hardy Wentzel, chief executive officer of Structurlam, said the height change allows the company to continue being an innovator on mass timber products and building designs.

He said the company uses B.C. wood, including spruce, pine and fir.

Canada is a leader in wood technology, using different forms of timber and lumber to create products that can be formed into pre-fabricated wood used as beams, columns, walls, arches, floors and roofs, says the Canadian Wood Council.

Wentzel said mass timber buildings are safe and faster to build, but the long-standing tradition of concrete buildings holds strong.

"The builders may be set in their ways, but when they actually do the economics of building 12-storey wood buildings versus a 12-storey concrete building, and they do a full cradle to grave analysis, they're going to find this is the better way to build," he said.

"I do believe a lot of people are going to start having an awareness and that's going to lead to more tall wood construction," he said. "It's got some natural characteristics and it just looks better."

A Housing Ministry news release says mass timber buildings meet or exceed performance standards for safety, structural resilience and fire protection. It says the 17-storey Brock Commons student residence at the University of British Columbia was the world's tallest mass-timber building when it opened in 2017.