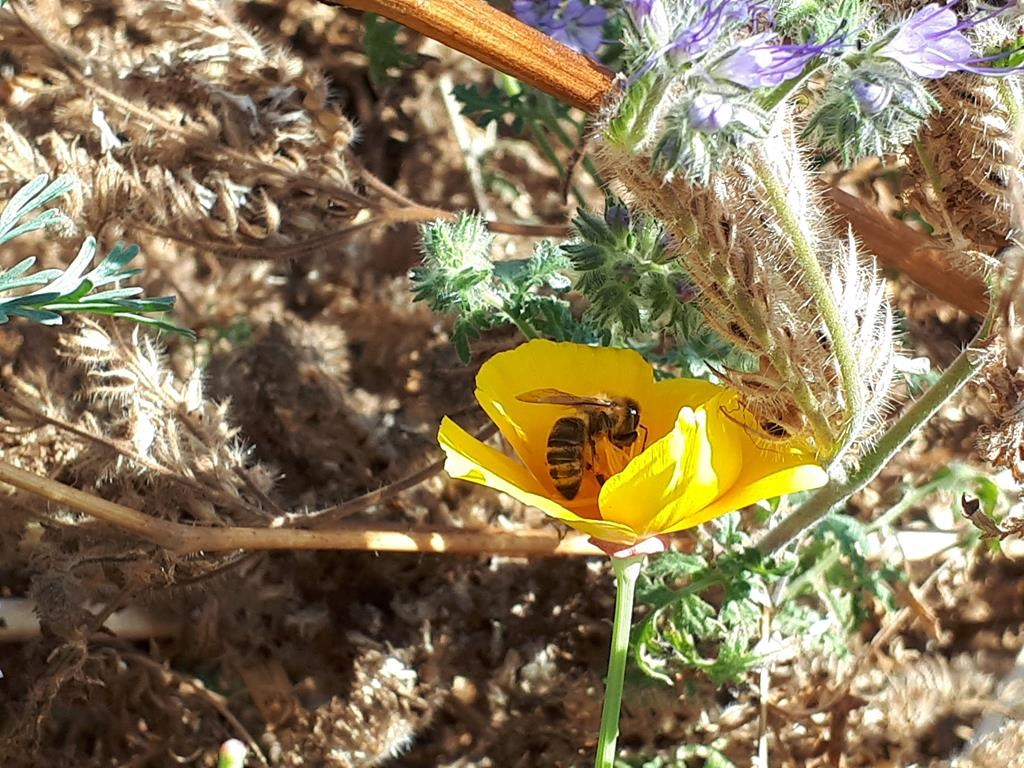 A honey bee in a flower is shown in a handout photo. Handout photo by The University of British Columbia
Previous story

Honey from urban honey bees can help pinpoint the sources of environmental pollutants such as lead, a new study from the University of British Columbia suggests.

Scientists from the university's Pacific Centre for Isotopic and Geochemical Research analyzed honey from urban beehives in six Metro Vancouver neighbourhoods where they tested for lead, zinc, copper and other elements.

"They fly through the air and drink water and land on surfaces in addition to foraging the way we think they forge for pollen and nectar," said Kate E. Smith, lead author of the study and a PhD student at the university. "So while they are interacting with all parts of the environment they are also passively collecting dust and particulates."

The researchers found the concentration of elements increased closer to areas with heavy traffic, higher urban density and industrial activity such as shipping ports.

Scientists analyzed beehives from rooftops in high density urban areas to those off on Galiano Island, she said.

"So we have hives surrounded by all different types of land use," Smith said.

They found that honey from areas downtown, higher urban density or heavier concentration of industrial activity had elevated concentrations of certain trace elements that are indicative of human activity such as zinc, titanium, copper or lead.

The good news is that the chemical composition of honey in Vancouver reflects its environment and is extremely clean, Smith said.

"Vancouver is still quite a clean city. It's not bad. Just typical of a city."

Metro Vancouver honey is well below the worldwide average for heavy metals such as lead, and an adult would have to consume more than 600 grams — two cups — of honey every day to exceed tolerable levels, Smith said.

Researchers used a technique called isotopic fingerprinting, she said, noting that lead has four isotopes, which are variants of a particular chemical element.

Analyzing these isotopes is similar to determining a fingerprint because it gives scientists information about the source of the lead, she said.

Lead that comes from rocks, the Garibaldi volcanic belt or sediment from the Fraser River is different from that which comes from downtown because of human activity, Smith said.

"The unique aspect of this study is the use of lead isotopes to help fingerprint the potential sources of lead in environments with different types of land use," Smith said. "This is the first study to do this with honey in North America."

The concentration of elements increased closer to downtown Vancouver, and is largely from manmade sources, she said.

The four years worth of data researchers have can serve as a baseline for future studies, she noted.

"Cities are a very dynamic environment. We have issues and challenges like climate change and all of these factors will contribute to how the landscape of the city changes," she said. "And we can continue to monitor this by monitoring honey from honeybees."

"An example of qualitative information would be the canary in the coal mine but here we are getting quantitative data that tells us about the environment immediately surrounding the hive," she said.

"I think it's mostly useful in that it would supplement those more traditional methods of environmental sampling like air and top soil."