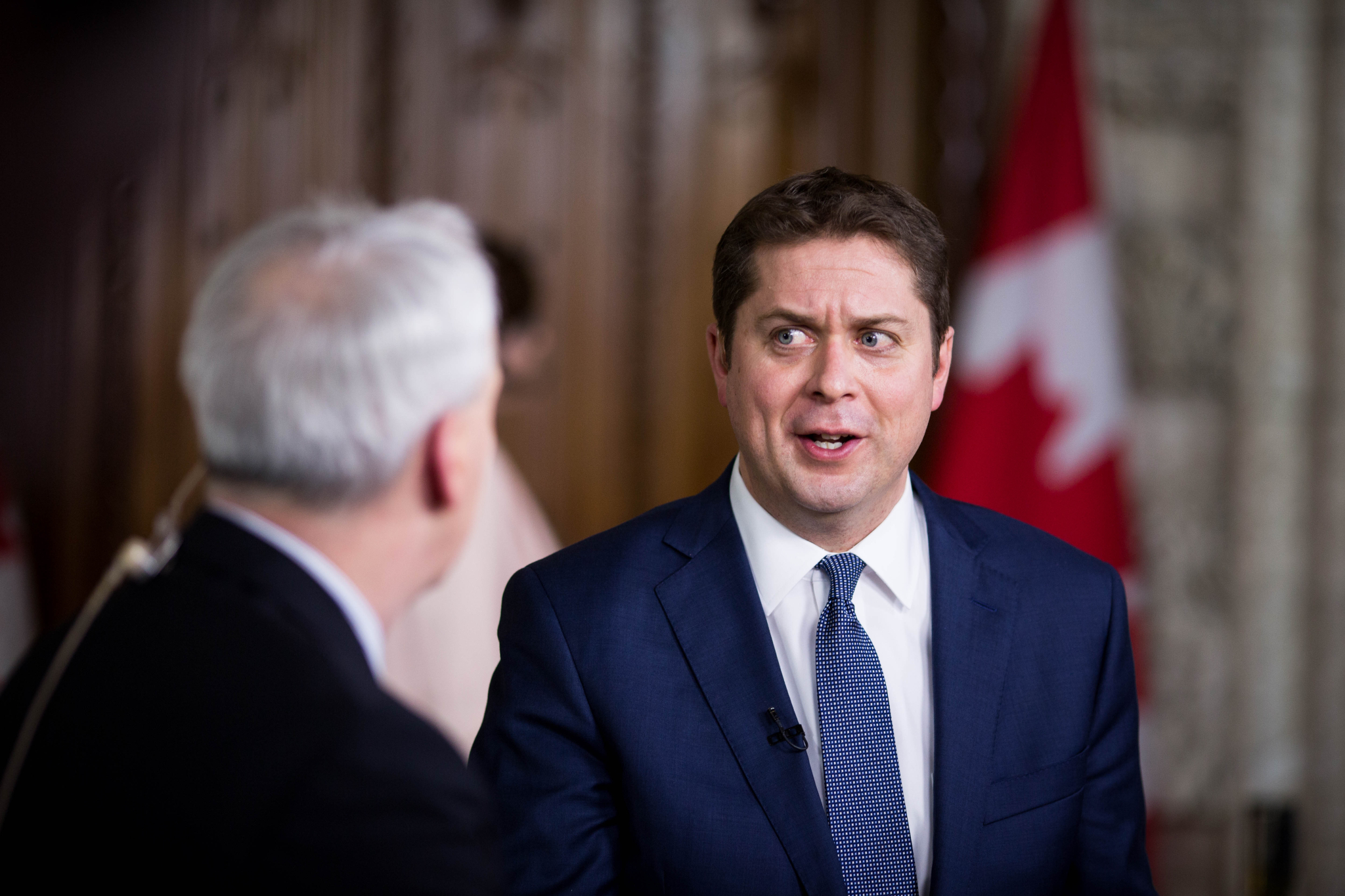 Conservative parliamentarians banged tables and stomped their feet in the House of Commons on Tuesday while Finance Minister Bill Morneau sought to deliver a speech about the 2019 budget. The Tories eventually walked out, with Leader Andrew Scheer saying the budget had no legitimacy while Prime Minister Justin Trudeau's government was intent on shutting down an inquiry into the SNC-Lavalin affair.

“Justin Trudeau is covering up his SNC-Lavalin corruption scandal under $41 billion of brand new spending, with plans to raise taxes to pay for it if he is re-elected,” Conservative Leader Scheer told reporters outside the House of Commons, surrounded by scores of his party's MPs.

“Today’s budget is part of the continuing coverup," he said. "This budget is not a serious fiscal plan for the country.”

Scheer deflected numerous questions on the details of the budget, including on how a Conservative government would plan to rein in the deficit, returning each time to talking points about the SNC-Lavalin crisis, which has dogged the government for weeks and led to several resignations.

At the heart of the crisis are allegations that Trudeau and other government officials inappropriately pressured former attorney general Jody Wilson-Raybould to intervene in the criminal prosecution of SNC-Lavalin, a Quebec engineering firm. Trudeau and others in government have denied this was the case.

Scheer said that the government's move to kill the justice committee inquiry on the same day it released an election budget “was something we could not sit in the House and stomach," to cries of affirmation from his caucus.

“As you just witnessed, we will use every tool at our disposal to hold Justin Trudeau to account. Nothing is off the table and we are prepared for anything,” he said, drawing more applause from fellow Tories.

“We do not want to become the kind of country where powerful politicians can use the justice system to reward their friends and punish their enemies.”

Earlier in the day, Trudeau said that Conservative tactics throughout the day reflected a desire to avoid talking about the economy.

"I think it’s actually quite interesting to see the Conservatives desperately don’t want to talk about the economy," the prime minister told reporters outside the House of Commons. "I think a lot of people will raise an eyebrow at that. The Conservatives still don’t want to talk about jobs, about growth, about investing in Canadians because they’re realizing they have no plan. They’ve never had a plan to grow the economy.

"Their approach for 10 years under (former prime minister) Stephen Harper didn’t work. They gave more benefits and more advantages to the wealthiest and our economy faltered. Over the past four years we’ve invested in the middle class and that has made a huge difference. They don’t want to admit that their approach has failed so they would rather do anything than talk about the federal budget and the Canadian economy. We’re going to keep talking about it because it matters to Canadians."

NDP Leader Jagmeet Singh did not say whether he thought the Conservative protest was appropriate, while Green Leader Elizabeth May said that on the SNC-Lavalin issue the official opposition had her sympathies.

“The Liberal government had their last chance to show Canadians they are on their side and again they’ve just giving crumbs to Canadians and the entire pie to the wealthiest," Singh said.

May said there was not nearly enough cash made available for the transition away from fossil fuels and that the Trudeau government was clearly offering promises it could only deliver if still in government after the October election.

She said it was baffling that the government had channeled $1 billion through Federation of Canadian Municipalities for this year only for energy-efficient building retrofits, with no follow-through in subsequent years.

"In terms of money spent, a pittance. In terms of commitment, bear in mind this government, for all of its lofty rhetoric, has the same target for greenhouse gas reductions as did Stephen Harper," she said.

"Incrementalism will not work in the face of the climate crisis."

She added that the budget was like a big present in green wrapping paper with a ribbon that can't be opened unless they are re-elected and get dozens of legislated changes adopted in the House of Commons.

She also said she could understand the frustration of the Conservatives with the government's actions.

“I usually do not like monkey wrenching a government process in the House," she said. "This time my sympathies were with the Conservatives, because we really do need to have our former attorney general back to answer questions before the justice committee.”

People’s Party of Canada Leader Maxime Bernier said the Liberals were "spending money to help them to get re-elected and it is irresponsible.”

In Ontario, Finance Minister Vic Fedeli also slammed the federal budget arguing that it "does not share Ontario's vision to stay open for business and open for jobs."

Fedeli's statement to reporters at Queen's Park focused largely on the federal government's plan to tackle climate change by putting a price on carbon pollution in provinces that have failed to do so as agreed during a meeting of federal, provincial and territorial leaders in December 2016. The minimum standard is set to kick in across the province on April 1. Fedeli said the federal budget had not accounted for any of the concerns he had written directly to Morneau about, including canclling the carbon pricing plan, reducing red tape for the provnce's manufacturing industry and fighting U.S. tariffs on behalf of the automotive, steel and aluminum sector. He also took issue with the lack of acknowledgement of federal transfers in the new budget.

"We're not really sure if anything they promised will ever be realized," he said, adding that it reminded him of the "devastation" that was caused by previous provincial Liberal governments' budgets left in Ontario, which the Tory government is now fixing, according to Fedeli.

"I'm seeing a mere mirror image here with the federal Liberals," he said. "I know that when Andrew Scheer wins the fall election, they will inherit the same, difficult issues that we have inherited here in Ontario, and I know that they will work just as hard for the people of Canada as we are for the people of Ontario."

The only thing Fedeli liked about the federal budget was the focus on skills training, he said. But the positive was outweighed by the carbon tax, he noted, which will "kill business and business incentives and so the very workers that will be training under that skills program will have fewer jobs to find in Ontario because of the job-killing carbon tax."

"We are disappointed the federal government continues to run deficits, endless deficits," Fedeli said. "But, we will not allow Ottawa to undermine Ontario's well-being."

Wow, those federal Conservatives really made some progress today. All of those blisters from banging their tables and stomping their feet, makes you think they might someday support medical care. Because there is little that the Conservatives won't do to support themselves and their corporate donors. Although I suppose "legitimacy" is not one of them. Like the Liberals are better … ha ha ha.

Bad form. Disrespectful of Parliament and Canadians. An ugly precedent for the future. Crass without class. A reminder of why they lost the last election.

You two are clueless and have

You two are clueless and have NO idea exactly how angry Canadians are with this present government. Your pathetic attempts at deflection only show your hypocrisy. Canadians will not be bought and will punish the Liberals like we did after Adscam only more because they have proven that they didn't get it... Like SNC, they are an inherently corrupt organization and mealy mouthed weasel words from them, their media friends and their hacks aren't going to cover this up. Nice try though.

My daughter teaches Grades 5 and 6 and she would not allow her young children to behave that childish and rude. One can disagree but there are respectful and ethical means to do that. I hope Canadians remember this on voting day.

Oh good lord. Just what I'd

Oh good lord. Just what I'd expect, but get a grip Scheer. Yes, the SNC-Lavallin issue is significant (not that the even-more-corporate party would have done anything different, except that they would never have had anyone available to be Attorney General who would have dreamed of allowing a big corporation to get charged with anything, so there would have been no need for pressure from the PM).
But SNC-Lavallin is one thing, the budget is another. That the government has done something inappropriate on one file does not make it OK for you to act like little kids about something unrelated. The Conservatives have long forgotten the word "dignity".

Don't you get tired of the

Don't you get tired of the puerile tantrums of our so-called "loyal opposition? Give me fact based, reasoned debate among adults rather than the out of control idiocies of nursery school children.

In reply to Steve Burton: The anger he speaks of is evidence of the impotence of those who find fault with the existing reality. Explosions of fake rage only prove the absence of constructive intelligence on the part of the opposition.

All governments are reactive to those who support them and of course, when one's own ox is being gored, the ill-favoured are apt to throw around slurs of cheating, corruption and malfeasance, conveniently forgetting the similar behaviour of the previous government which favoured them.

Anger is a poor weapon to employ in politics.