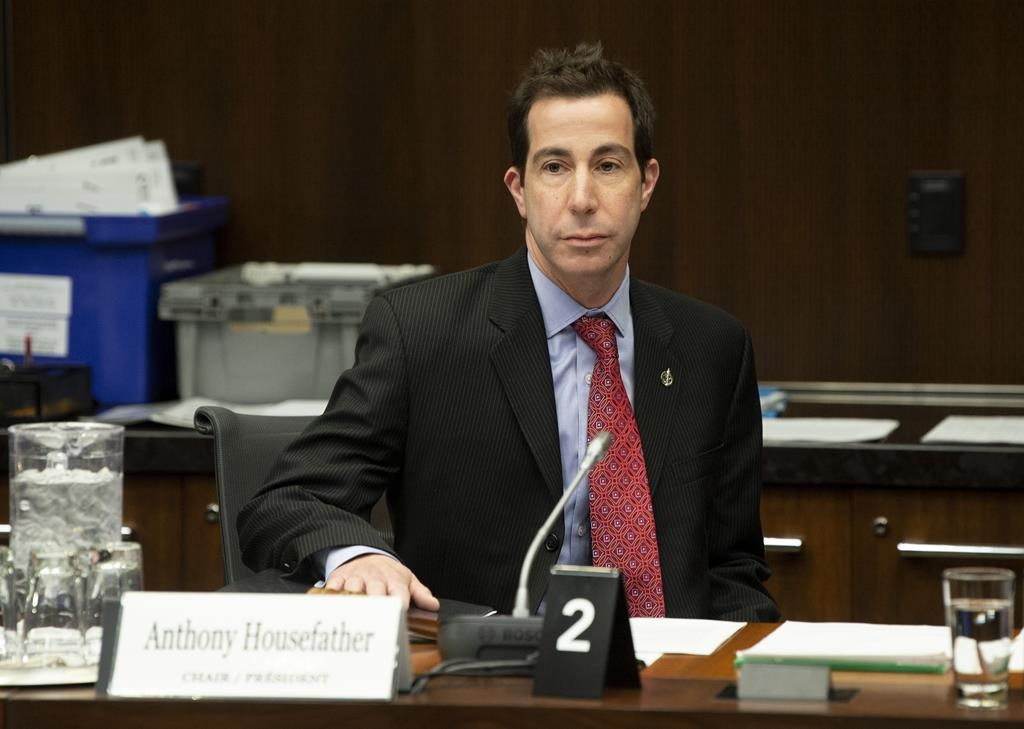 Justice Committee chair Anthony Housefather waits to start an in-camera meeting of the Justice Committee in Ottawa, on Tuesday, March 19, 2019. Photo by The Canadian Press/Adrian Wyld
Previous story
Next story

The Liberal-dominated justice committee has pulled the plug on its probe of the SNC-Lavalin affair, prompting fresh howls of outrage from the Conservatives and NDP.

Conservative Leader Andrew Scheer accused Prime Minister Justin Trudeau of "thumbing his nose" at Canadians, and said the official Opposition would use "every tool available to us" to hold the government accountable in Parliament.

Finance Minister Bill Morneau is slated to deliver his budget speech at 4 p.m. in the House of Commons, but Scheer repeatedly sidestepped questions about what, if anything, the Opposition could or would do to delay the presentation.

Scheer called the government's budget "a political prop" in its "unprecedented cover-up" of the affair that has rocked the Liberal cabinet and prompted Trudeau's top adviser and the country's most senior public servant to resign.

Montreal-based SNC-Lavalin finds itself at the centre of a national political storm over allegations prime ministerial aides crossed a line in leaning on Wilson-Raybould to help the company avoid criminal prosecution on corruption charges.

Liberals on the justice committee wrote to the chairman, fellow Liberal Anthony Housefather, this week to say the committee had done its job and should move on to other business.

"As committee members, we have achieved our objectives with respect to these meetings," says the letter. "Following the testimony of all witnesses, we believe that all rules and laws were followed. Canadians now have the necessary information to arrive at a conclusion."

Liberal committee member Randy Boissonault reiterated the contents of the letter following the meeting, saying Tuesday's session was the 10th in five weeks, amounting to 13 hours of testimony given by 10 witnesses.

"We have heard from many of the key players in this matter," he said.

The Liberal members tabled a motion Tuesday calling for the committee to begin a study of the rise of hate crimes in Canada.

They say the federal ethics commissioner, who has launched a probe of the SNC-Lavalin matter, is best suited to investigate the political controversy.

But the opposition would have none of it.

Conservative MP Lisa Raitt said the committee should hold town-hall meetings on SNC-Lavalin and hear from Canadians about the affair.

Wilson-Raybould has a right to reply to other witnesses including Gerald Butts, the former top adviser to Trudeau, Raitt said in objecting to the Liberal effort to move on.

New Democrat MP Murray Rankin called it "yet another effort to change the channel" by the government.

SNC-Lavalin faces legal trouble over allegations it paid millions of dollars in bribes to obtain government business in Libya. The company unsuccessfully pressed the director of public prosecutions to negotiate a "remediation agreement," a legal means of holding an organization to account for wrongdoing without a formal finding of guilt.

The director told SNC-Lavalin in October that negotiating a remediation agreement would be inappropriate in this particular case.

Wilson-Raybould has told the justice committee she was relentlessly pressured to ensure the Montreal engineering giant was invited to negotiate an agreement. She was shuffled from the justice portfolio in January, becoming veterans affairs minister.

Trudeau has denied that any undue pressure was placed on Wilson-Raybould.

She has testified at the justice committee for nearly four hours, but has indicated there is more to say, particularly about the period between her move to Veterans Affairs and her resignation from cabinet a month later.

Butts, once considered Trudeau's right-hand man, quit his job as principal secretary, saying he did not want to be a distraction from the government's agenda. In addition, Jane Philpott left cabinet over the government's handling of the controversy.

The SNC-Lavalin affair claimed its fourth resignation Monday as Michael Wernick announced he will step down as the country's top public servant, having concluded he's lost the trust of opposition parties.

SNC Lavalin,
Listening to its CEO was quite incredible, asking the public to move on since all those unethical happenings were way back in around 2013. He forgot to mention his contract deal with PM Trudeau, that makes them the only Company working for the federal government. This, in it self is outrages, cutting out any competition, I guess even window washing. Their lobbyists are well enthroned in this liberal government. No wonder PM Trudeau's justice committee wants to shut down any further inquiry. Good bye transparency! I wonder if this government still have the power to pull the wool over the eyes of Canadians.