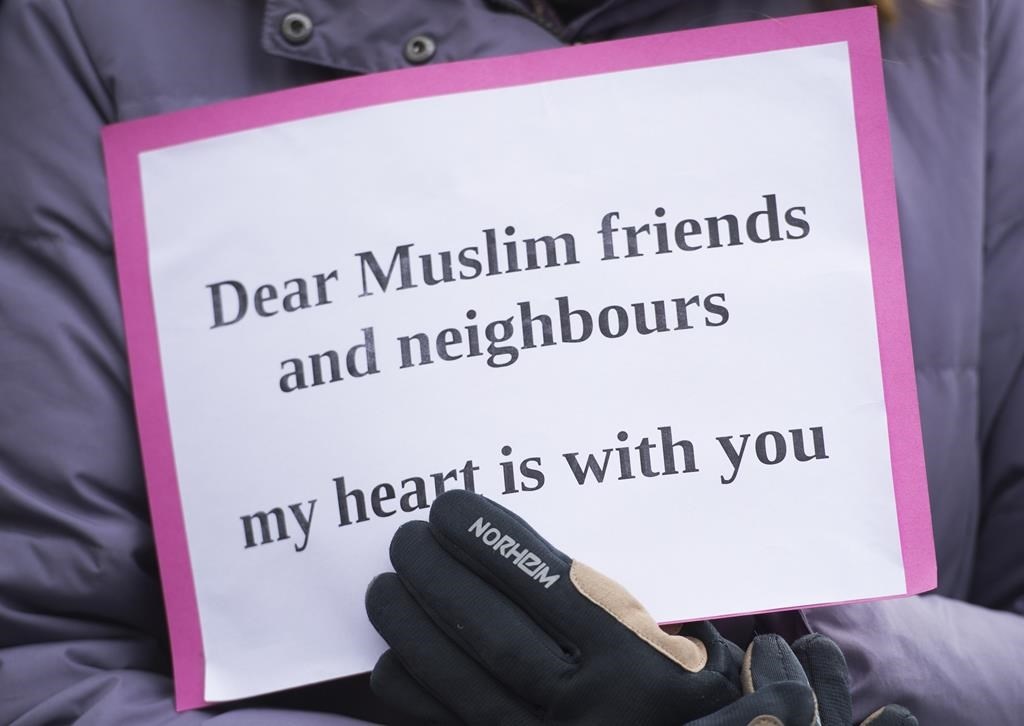 A woman holds a sign during a vigil in Montreal, on Sunday, March 17, 2019, following a shooting at a mosque in Christchurch, New Zealand which left 50 people dead and many more injured. Photo by The Canadian Press/Graham Hughes
Previous story
Next story

Mourners carrying signs bearing the images of six men who died in a Quebec City mosque shooting gathered outside a Montreal subway station on Sunday as they grieved the 50 people killed in another attack, half a world away.

The signs bearing photos of the men carried the words "Killed by Islamophobia, 29-1-2017, Quebec."

Dozens of people of different faiths gathered on a chilly afternoon to offer condolences and prayers for the 50 people killed and dozens injured in Friday's shootings at two mosques in Christchurch, New Zealand.

Many of the Muslims in the crowd said the attack brought up painful memories of the day a gunman stormed a Quebec City mosque on Jan. 29, 2017, shooting six Muslim men to death and injuring five others as they prayed.

On Sunday, Imam Hassan Guillet referred to unconfirmed reports that the New Zealand shooter was influenced by Alexandre Bissonnette, the man convicted of six counts of first-degree murder in the Quebec attack.

"A thousand kilometres from Quebec, a terrorist sent us a message by writing on his weapon the name of our assassin, our terrorist, Alexandre Bissonnette," Guillet said as he delivered a speech from a park bench.

"As a Canadian, as a Muslim, as a human, as a father, I'm ashamed to see that we — as Quebecers and Canadians — instead of exporting our values of openness and generosity, we're exporting violence, hate and terrorism."

A now-deleted Twitter account believed to be linked to the accused Christchurch shooter appeared to show three assault-rifle magazines, one of which had Bissonnette's name on it.

Guillet's speech also targeted Premier Francois Legault, who has previously denied that Quebec has a problem with Islamophobia.

The crowd included Montreal Mayor Valerie Plante, as well as federal and municipal politicians and representatives from various churches, synagogues, and citizens groups. Some held signs bearing messages such as "Muslims and Christians are family."

Several who made speeches drew parallels between the New Zealand massacre and the murder of nine African Americans in a church in Charleston, South Carolina, in 2015, and of 11 Jewish worshippers in a Pittsburgh synagogue last year. One by one, the speakers called on those in attendance to stand up against the propagation of hate speech and the rise of the far right.

"This massacre spread the language of hate that has no place among us, and has to be defeated by our unity — not only as Muslims but as the whole world."

But many of those in attendance also challenged the media, politicians, popular culture and fellow citizens to stop portraying Muslims in particular as outsiders. Several denounced the Quebec premier's plan to ban religious symbols for state workers in positions of authority; another noted the lack of non-white characters on Quebec television shows.

"We keep being put in the position of the other and the stranger and the outsider, which really fuels this kind of hate that leads to violence, leads to attacks," said Ehab Lotayef, one of the organizers.

"All we ask for is to be portrayed for what we are: normal contributors to society, normal people who have hopes and aspirations and concerns."

On Saturday, Prime Minister Justin Trudeau spoke with his counterpart in New Zealand, offering his condolences for the 50 people killed and dozens injured following Friday's shootings.

One man has been arrested and charged with murder in what appears to have been a carefully planned racist attack in New Zealand.

Trudeau's office said he offered Canada's support, and the leaders agreed to stay in touch and "work together on their shared priority of ensuring safe, secure and open societies."

Trudeau was scheduled to visit an Ottawa-area mosque later Sunday in the wake of the attacks in New Zealand.