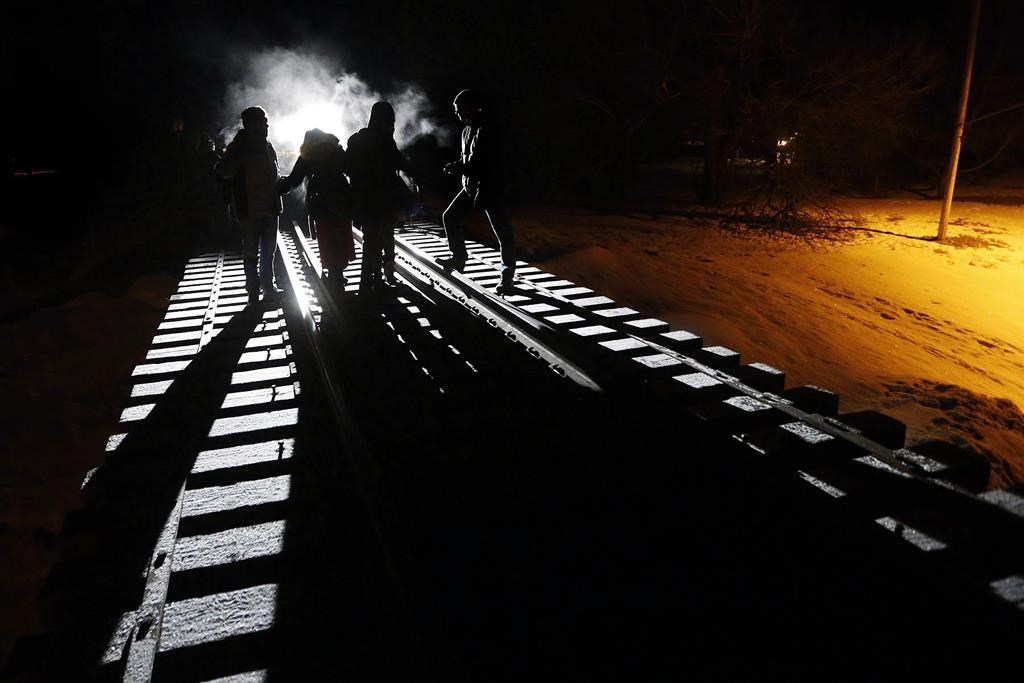 Early Sunday morning, Feb. 26, 2017, eight migrants from Somalia cross into Canada illegally from the U.S. by walking down this train track into the town of Emerson, Man., where they will seek asylum at CBSA.File photo by The Canadian Press/John Woods
Previous story
Next story

A pregnant woman who walked across the United States border into Manitoba was rescued after she became trapped in a snowbank and appeared to go into labour.

The woman called 911 after she walked from Minnesota across the border near Emerson. She had been following railway tracks, but ended up going off the path and wandered into deep snow along the rail bed.

"It's definitely dangerous," Carlson said in an interview on Tuesday. "You can get yourself in a bad situation quickly, especially someone in the condition she is in."

A recent snowfall had left the area covered, Carlson said, and temperatures dropped below -20 C over the weekend. Carlson said he wasn't sure how long the woman had been outside, but she had made it about 180 metres across the border when she got stuck.

The firefighters who responded to the call were able to get there in about 15 minutes.

"When our personnel showed up and found her, not only was she stuck in the snow, but she was apparently pregnant and going into labour."

Firefighters freed the woman and kept her warm until an ambulance arrived and took her to hospital.

RCMP said she did not give birth, was placed under arrest for illegally entering the country and was later turned over to the Canada Border Services Agency.

On Christmas Eve in 2016, two men lost fingers to severe frostbite after crossing in the same area during a blizzard. The two men from Ghana were among the first wave of refugee claimants to walk across the border into Canada after the newly elected president of the United States, Donald Trump, made executive orders on immigration.

In June 2017, the body of a woman attempting to cross into Canada was found on the U.S. side of the border.

The reeve said this weekend's close call is a stark reminder of the dangers.

"We are really glad things worked out the way they did because it could have been a lot worse," he said. "If her cellphone hadn't worked for any reason, or if she didn't have a cellphone, it would have been a real double tragedy."