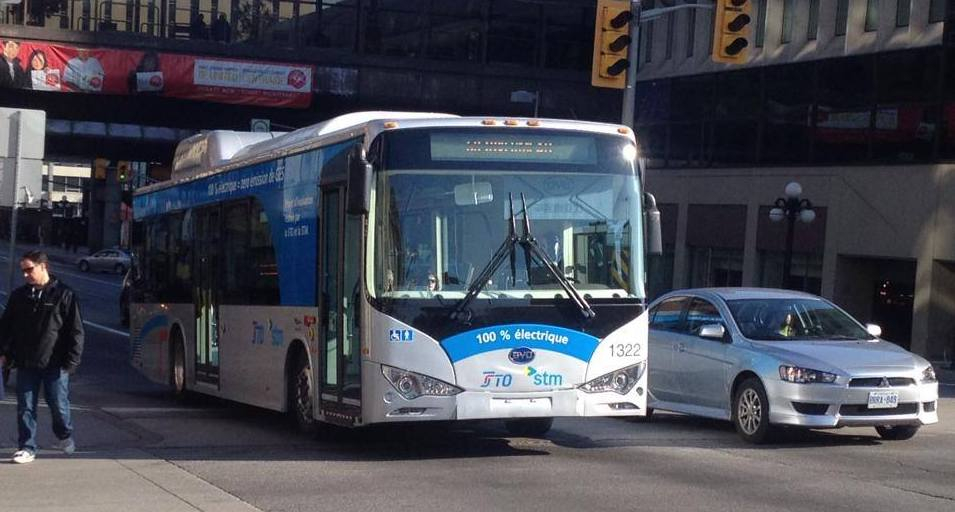 Canada is home to leading-edge electric bus manufacturing companies, but a report released Thursday by the Vancouver-based think tank Clean Energy Canada says that the country's transit agencies are not buying and using the cleaner buses as fast as their counterparts in other countries.

“We’ve got four buses in Vancouver, two in Victoria, 10 in Toronto,” Smith said. “Our leader is Montreal with 36 buses ... Overall, Canada’s approach is very cautious and there isn’t a good reason for it (to be cautious).”

Most Canadian transit operators have been slow to adopt electric buses compared to cities such as Los Angeles, Amsterdam, and Shenzhen, which, according to the report, could lead to Canadian e-bus companies moving and setting up shop elsewhere.

“Canadian electric buses are being sold in China and the United States, predominantly,” Smith said.

“But it definitely is advantageous for companies to be able to demonstrate that their technology is supported at home as well.”

According to Environment and Climate Change Canada, a quarter of Canada’s emissions come from transportation.

“Think of school buses,” Smith said. “We often see black smoke belching out the back. Lion Bus is making electric school buses in Quebec. Wouldn’t you rather send your kid to school on an electric bus with no exhaust fumes? We can do that today... And, we’re supporting Canadian jobs and Canadian companies.”

In addition to slashing carbon emissions, e-buses offer massive fuel savings, the report says. E-buses tested in Edmonton required greater initial investments than diesel buses, but they cost 44 per cent less to operate, according to a feasibility study.

Metro Vancouver’s transit service, TransLink, expects that as battery prices continue to fall, e-buses will become cheaper than diesel over their lifespan by 2023 — including the initial purchase costs. The Mayors’ Council on Regional Transportation projected net savings will be around $24 million to $50 million annually.

Some Canadian municipalities have adopted targets and timelines for reducing their transit emissions to zero. Clean Energy Canada identified a handful of these cities leading the way, providing blueprints for other Canadian transit services to launch their own e-bus fleets.

Edmonton is on track to make the largest single purchase of electric buses ever in Canada, with a total of up to 50 from a manufacturer based in California. Two buses will hit the road this summer in order to test out charging infrastructure. The city says it plans to put about 20 buses into service by summer 2020, with up to 28 more e-buses coming online by 2022. The buses will take between one to four hours to recharge in a transit garage.

The study also surveyed more than 2,800 e-bus riders and interviewed bus operators and maintenance staff. The results were favourable across the board. Riders preferred e-buses to their diesel counterparts on every performance aspect evaluated, including comfort and quality, as e-buses offer quieter and smoother rides.

According to the city's transit plan, Edmonton has not yet established a specific emissions reduction target and timeline, opting instead for a “phased strategy” to implementing alternative energy in its transit fleets and facilities. The feasibility study notes that an e-bus operating today will emit between 38 to 44 per cent less carbon dioxide and equivalent emissions than its diesel-powered counterpart, becoming more efficient over time as electricity generation gets even cleaner.

In Vancouver, TransLink has committed to powering its fleets and facilities entirely with renewable energy by 2050. Vancouver is already home to the third-largest system of electronic trolley buses in North America. The city’s 262 buses draw power continuously from overhead wires installed throughout their routes.

Two Canadian manufacturers, New Flyer in Winnipeg and Nova Bus in Quebec, will each produce two of the buses for testing along Marine Drive in South Vancouver, Burnaby, and New Westminster. The buses charge in four to seven minutes while drivers are taking a break or passengers are getting on and off.

In 2018, TransLink invested $142 million from the federal gas tax fund in new transit vehicles, including 62 hybrid buses and six zero-emission battery-electric buses. This year’s federal budget, released on Tuesday, allocates an extra $2.2 billion to First Nations and municipalities over the next year to address infrastructure deficits and needs, doubling what Ottawa transferred last year. According to a TransLink press release, this year’s commitment could lend an extra $130 million to transit in Metro Vancouver.

Montreal’s transit service has set an even more ambitious target of 100 per cent electric buses and zero emissions by 2040. Between now and 2025, Montreal will purchase only hybrid or electric buses, with six rapid-charge and 30 slow-charge e-buses currently on the way.

The Toronto Transit Commission, which operates the third most heavily-used transit fleet in North America, has committed to 100 per cent zero-emission transit by 2042. It acquired 10 new battery-electric buses last year, with a projected total of 60 e-buses and 200 additional hybrid buses by the end of 2019.

Smith said these cities are the standouts in Canada.

In China, Shenzhen became the first city in the world to power its buses almost entirely with renewable energy — 99.5 per cent to be precise — growing its fleet of electric buses from 1,000 to 16,000 in five years. The buses are serviced by a “high-density network of charging infrastructure,” says the Clean Energy Canada report.

Los Angeles retired its last diesel bus in 2011 and has since introduced a combination of buses powered by compressed natural gas and electric buses, with the goal of 100 per cent zero-emissions buses by 2030. As of 2018, the L.A. transportation authority operates more than 130 e-buses, and ordered up to 100 more from New Flyer, according to the Canadian company’s website.

Amsterdam is aiming to have 100 per cent zero-emissions transit by 2025. Last year, the city acquired 100 battery-electric buses, making it the largest fleet of electric buses in Europe.

The Clean Energy Canada report encourages Canadian transit operators to set dates by which to procure e-buses only and says manufacturers here are ready, they just need the support of political will and policies.

“Many transit fleets [are] constantly turning over,” said Smith. “Once you purchase a new bus, it’s there for the next 20, 30 years. In the next five years, we need to be shifting to purchasing zero-emission transit fleets ... We’re calling on the federal government to help support those upfront costs and we’re encouraging municipalities and transit authorities to look at these overall lifecycle costs.”

It is unfortunate that in

It is unfortunate that in your article you make no mention of a significant Canadian electric us manufacturing company.

GreenPower employs a clean-sheet design to manufacture all-electric buses that are purpose-built to be battery-powered and zero-emission. GreenPower is headquartered in Vancouver, British Columbia