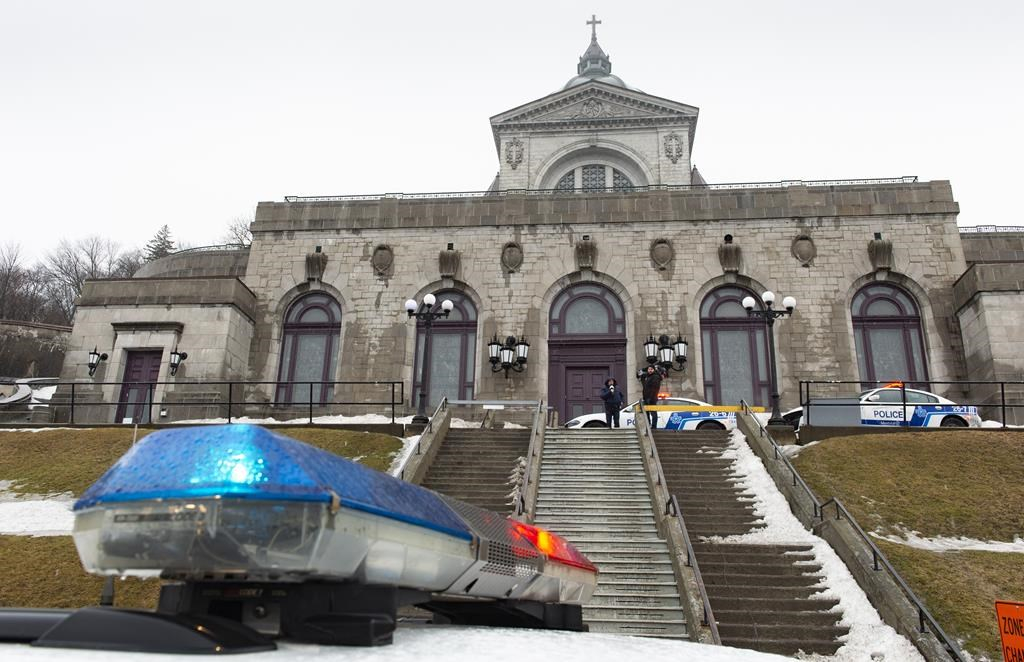 Police cars surround the St. Joesph's Oratory in Montreal on Friday, March 22, 2019. A Catholic priest was stabbed as he was celebrating mass this morning at the Oratory. Photo by The Canadian Press/Paul Chiasson
Previous story
Next story

A 26-year old man has been charged with attempted murder in the stabbing of a Catholic priest during morning mass at Montreal’s St. Joseph’s Oratory on Friday.

Vlad Cristian Eremia, who appeared in a Montreal courtroom via videoconference Saturday afternoon, is also charged with assault with a weapon for allegedly attacking the Oratory's 77-year-old rector with a knife.

Eremia, who wore a blue-and-white checked shirt, did not speak during his brief appearance other to confirm he was represented by a legal aid lawyer.

The Crown objected to his release and requested he receive a psychosocial evaluation before his bail hearing, which is expected to take place Monday.

Earlier Saturday, the priest who was stabbed expressed gratitude for the support he's received from the public.

Rev. Claude Grou was released from hospital Friday night after suffering minor injuries in the attack.

"My health is good and I'm recovering from my emotions," he said in a statement released by the church.

He thanked the public for their many messages of support, and said he would resume his duties after a few days of rest.

"I pray that St. Joseph's Oratory will remain a place of welcome, prayer, calm and peace — as it has been for over 100 years — and I look forward to returning to work," he said.

The incident began shortly after 8:30 a.m. on Friday when a man with a knife rushed the sanctuary of the landmark church and stabbed Grou in front of dozens of worshippers.

Witnesses said a man rose from a pew midway through the morning mass and rounded the altar to stab Grou as he prepared to proclaim the gospel. They said the suspect, who was quickly restrained by those present, did not speak during the attack and waited calmly for police to arrive.

Police have not suggested a motive for the attack, but say there's no evidence to suggest the suspect was linked to any group.

The Oratory said on Saturday that it takes security seriously, and has a security team on duty at all times.