Mike Layton is urging Toronto to reckon with climate change 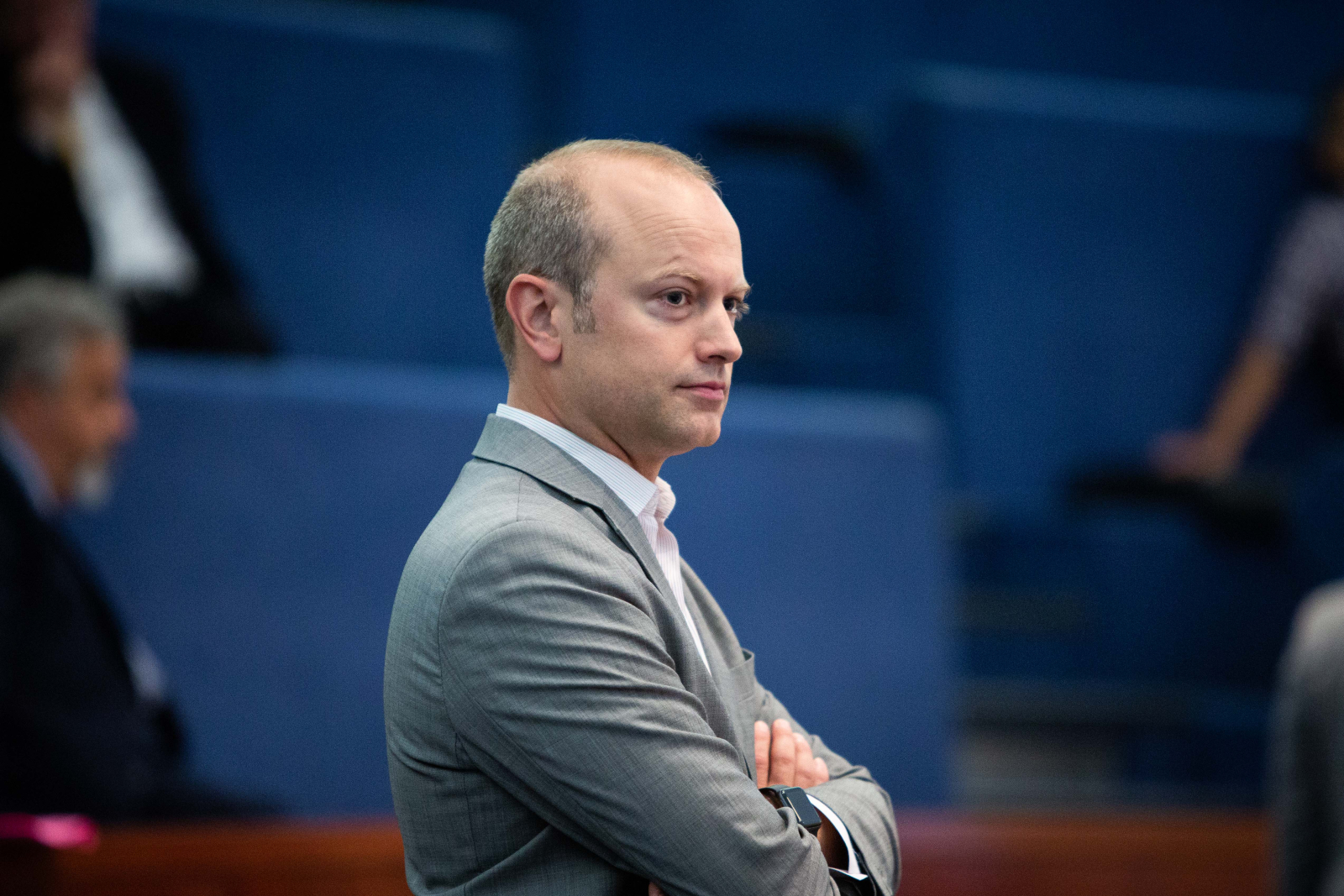 If Mike Layton succeeds, Toronto could become the largest Canadian municipality to move toward suing Big Oil for the increasing costs of climate change.

On Thursday, Layton, the son of former federal NDP leader Jack Layton, proposed a motion to examine what steps Toronto city council can take against the world's largest polluters: the oil and gas sector.

The move by North America’s fourth largest city, would add considerable heft to a legal manoeuvre initiated by Victoria, the B.C. capital nestled at the bottom of Vancouver Island, to get that province’s municipalities to file a class-action lawsuit.

But, the Toronto City councillor's proposal to study legal avenues against the energy sector has already triggered a backlash from Alberta Premier Rachel Notley and United Conservative Party Leader Jason Kenney on the election campaign trail. And Toronto Mayor John Tory has weighed in with a warning that Ontario and Alberta need to work together.

"I don't think lawsuits against oil companies are going to accomplish much except to make lawyers more well-to-do and to give airtime to people who are involved in political theater," Tory said Wednesday.

Layton's motion calls for the creation of a report, expected by the end of the year, which would outline the extra costs of climate change to the City of Toronto and “any legal avenues to pursue compensation for those costs from major greenhouse gas emitters." Layton estimates that price tag is in the billions. His motion cites the Insurance Bureau of Canada which has found that, since 2005, the Greater Toronto Area has had six “100 year storms." These are severe storms that have a one per cent chance of happening in a year.

The motion says that governments are spending three dollars to repair infrastructure for every dollar in insured damages to homes and businesses from these severe weather events. Policies to address an increasing number of prolonged heat warnings have also become an increasing concern in a city that has seen rising summer temperatures.

"These are all things that add cost to our budget that we can't afford it and someone's going to need to pay," Layton told National Observer in an interview at City Hall.

Cities will be on the hook for the costs of climate change on public infrastructure. Those that profit should pay for these costs. Toronto should join the fight led by New York and other major US cities. https://t.co/WjAUVqQkj1

The task won't be easy. It took seven years of trying for Layton to convince city council to vote in favour of a polluter pays motion that would force industrial wastewater companies to pay the full cost of treating the water they dump off on the city. Toronto residents pay more than $1 million annually to subsidize the wastewater pollution from over 100 companies, giving little incentive for these businesses to decrease pollution or invest in clean treatment methods.

His latest motion asks for a similar level of accountability:

"There is some merit in us looking to those profiting from climate change, from the release of greenhouse gases, to help us pay for it," Layton said. "The polluter pay model is not a new system of recovering the cost of climate change. It's just a theory that we, here in Toronto, need to start taking forward. We need to start thinking this way or else no matter what we do, no matter how good one jurisdiction can be, all cities are going to be on the hook for all the costs of climate change, globally."

As an example, Layton cites the Toronto Atmospheric Fund, which his father started over 25 years ago. The Fund provides a global model for how cities can foster and support innovation to reduce carbon emissions. Layton serves as the vice-president of the Fund and is also trying to create new plans for Toronto "to ensure that our city is doing all we can to mitigate and to adapt to climate change."

Layton said the way he was raised and his kids motivate him to tackle climate change at the municipal level.

"I wish more people saw the world with the notion of what we are leaving for the next seven generations," he said.

Cities like Toronto need to take "big steps" to confront a reality that is 10 to 20 years out in order to find and pay the costs of shifting sources of fuel, building carbon zero buildings and other long term changes required to address climate change, Layton said.

"I don't know if this council is ready to take those steps," he said, noting that it was a "rather conservative-led" municipal government that was lacking the sense of urgency needed to address an issue "that won't stop for us."

Right now, Toronto doesn't allocate resources to the problem and it doesn't have the level of mobilization needed to tackle it, Layton said.

"But we need to start treating it like an emergency."

Layton's motion came after several conversations with climate activists and learning what's going in New York and San Francisco. Lawsuits by these cities against fossil fuel producers have been dismissed by federal judges.

Still, Layton received encouragement from leaders across North America, including the mayor of New York City. After a Twitter exchange with his climate advisor, Layton said he reached out to the mayor's staff who were "eager" and "gave nothing but encouragement."

"I'm not an expert in in any of this. I want to know what it is going to cost the city and I want to know what our options are to pay for it," he said. "Certainly, the motion in front of us isn't to jump into a long legal battle, but it's to look at the cost and try to look at mechanisms that we might not have thought of before."

Will Toronto be the next city to take Big Oil to court? ⬇️⬇️⬇️ https://t.co/kq5yz5XZMH

In January, Victoria city council voted to support a municipalities-led class-action lawsuit against energy companies for costs related to climate change. The move has drawn criticism from politicians in Alberta, the centre of Canada's oil and gas industry.

“The adoption of Councillor Layton’s motion would be seen by most Albertans as another example of a campaign to attack and vilify the essential role that our province plays in the Canadian economy,” Kenney said. “It would pour yet more gas on the flames of the growing national unity challenge.”

Soon after Kenney released his statement, Notley also condemned Layton's motion on Twitter, saying “it’s clear Mike Layton is out of touch with Canada’s economic reality and doesn’t see Alberta’s contributions because he has tunnel vision.”

The Alberta NDP later sent a similar statement to National Observer from Notley saying that Layton had "completely ignored" the steps the government had taken to address climate change.

"Unlike some other industries, including those in Ontario, our oil and gas industry is world-leading when it comes to environmental standards," Notley said in the statement, also posted on Twitter. "We would certainly encourage Councillor Layton to take a look at alberta.ca and inform himself. He would also be wise to read the federal budget and see exactly what Alberta contributes to Confederation."

Today I sent a letter to the Mayor explaining how Alberta oil & gas benefits all of Canada.

We must be proactive in combating these attacks.

We would certainly encourage Councillor Layton to take a look at https://t.co/3r4TxiS00r and inform himself. He would also be wise to read the federal budget and see exactly what Alberta contributes to Confederation. 3/3 #ableg

Layton told National Observer that it was "unfortunate" that his motion was being "completely misconstrued for political gain."

"They're within their right to have their opinion and I think I'm within my right to have mine," he said. "I think what I'm asking for is what every city across Canada, around the world should be asking for. And that's help paying for the results of climate change."

Mayor Tory told reporters Wednesday that while he is "deeply concerned" about climate change in Toronto, the city has "an excellent program called TransformTO" that he would rather invest in than a legal challenge. TransformTO is a plan to meet the city's greenhouse gas reduction target of 80 per cent by 2050. Tory said the city had met its targets for 2020 and is on track for the next decade. He has also hired a chief resilience officer.

"I would rather devote my efforts to implementing TransformTO and getting people to change their behavior and retrofitting buildings and changing vehicles than lawsuits," Tory said. "I don't think lawsuits against oil companies are going to accomplish much except to make lawyers more well-to-do and to give airtime to people who are involved in political theater."

Tory said that he is in favour of collecting information about the damage climate change has done to the city's infrastructure. But he unequivocally offered his support to Layton's critics in Alberta:

"I will say this and I want to send this message loud and clear as the Mayor of Toronto, Canada's largest city, in Ontario to the people of Alberta. We are partners with people who live in Alberta in any of the cities and towns there. We've always been partners. They have helped us in times when we've been struggling in Ontario. We have helped them when they have been struggling and long may that continue to be the case. I think people forget down here sometimes the number of jobs whether it's in financial services, manufacturing or a host of other places the number of jobs we have right here in Toronto and in Ontario that depend on the relationship we have with Alberta and with Albertans.

Tory said he hoped that "instead of people saying and doing things that are divisive in our country that what we might do is find ways we can cooperate together through the incredible sort of storehouse of innovation that exists in Southern Ontario and in Alberta to find ways to improve the environment and to create new jobs and work on that together."

He added that he is "a Canadian first," and " when Alberta is hurting as it is, you do things to support them and to help them."

"We don't want to get into lawsuits about everything," Layton said. "My request is only to look at what the major emitters are doing, do we have any recourse there, and to look at what the costs are going to be. I don't think there's anything wrong with us trying to get that information."

Editor's note: This article was updated at 7:31 p.m. ET on March 28, with additional comments from Alberta NDP Leader and Premier Rachel Notley.

Do Toronto's mayoral candidates have a plan to fight climate change?

I really feel for Rachel

I really feel for Rachel Notley. She is in an untenable position. However, I think investigating these lawsuits is a good idea. No one thinks big tobacco is being unfairly attacked because they're not. What the oil industry has done by spending hundreds of millions of dollars to lie about climate change is on a whole different level than the tobacco problem. Smokers always had a choice (as much as an addict has choice) but climate change affects all life on Earth. What they have done is actually a crime of a magnitude that's hard to grasp. There are all kinds of good people working in the oil patch but that doesn't change what the worldwide industry has done and continues to do. One wonders what the people at the top of this pyramid I think they and their families are going to do in the future.