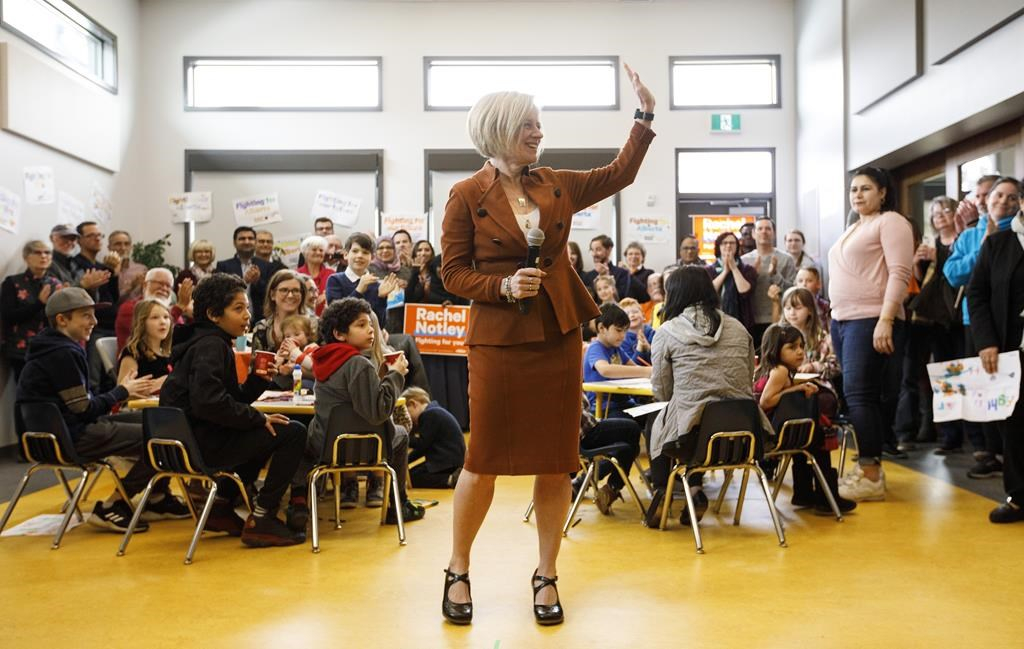 Alberta NDP Leader Rachel Notley makes a stop at a community centre while campaigning for the upcoming election, in Edmonton Alta. on Sunday, March 31, 2019. Photo by The Canadian Press/Jason Franson
Previous story
Next story

Notley's date for balancing the books is a year later than what's promised by her principal rival, United Conservative Party Leader Jason Kenney, who released his platform a day earlier.

But Notley said Kenney's math doesn't add up, noting the UCP plan saves money by scrapping a government-supported program to move oil by rail until new pipelines are built, but then doesn't record the revenue the province would have earned from that oil.

"He's booked the cancelled cost but he's failed to book the lost revenue. As such, there's a $2.5 billion math mistake at the heart of his platform," Notley said as she released the NDP policy document at a community hall in front of supporters and their families.

The NDP says the $25 per day child-care plan expands on a pilot project Notley started, and Notley said it will apply to every child-care space in the province. She also said 13,000 additional spaces will be created to meet growing demand and help women participate in the workforce.

It also promises to get the Trans Mountain pipeline expansion built, which Notley said she has been fighting for — despite UCP claims to the contrary.

"I haven't been shouting, I haven't been stomping my feet. Rather, we have been working strategically to build a national consensus with determination and with conviction," Notley said.

The UCP responded that the NDP promised in the last election campaign to balance the budget in 2018, which was then delayed to 2019 and is now being pushed back to 2023.

Jason Nixon, the UCP's house leader, said the NDP will run deeper deficits or hike taxes, and most likely will do both.

"They didn't include the carbon tax in 2015, only to force one on Albertans months later," Nixon told reporters on Sunday.

"So what will Albertans learn about a re-elected NDP's plan after election day?"

Voting day is set for April 16.

The NDP platform also notes a made-in-Alberta plan to upgrade its resources in the province, which it says will attract $75 billion in private-sector investment and create 75,000 jobs.

As well, the platform promises to ban programs that claim to change someone's sexual orientation or gender identity, and it says it will give the election commissioner more latitude to report on investigations.

An NDP government would also continue to work towards reducing greenhouse gasses and create a provincial hate crimes unit.

"Four years ago, Albertans put an end to 44 years of one-party rule and asked me and my team to focus on what matters — good jobs, good schools, good hospitals in a more diversified and resilient economy," Notley said, referring to the 2015 election that ended Progressive Conservative rule stretching back to 1971.

Humans are causing climate change, but those who disagree welcome in UCP: Kenney